Otto Bell's The Eagle Huntress is at its best when it attentively depicts how a determined individual overcomes inherent cultural prejudices to achieve the coveted dream. 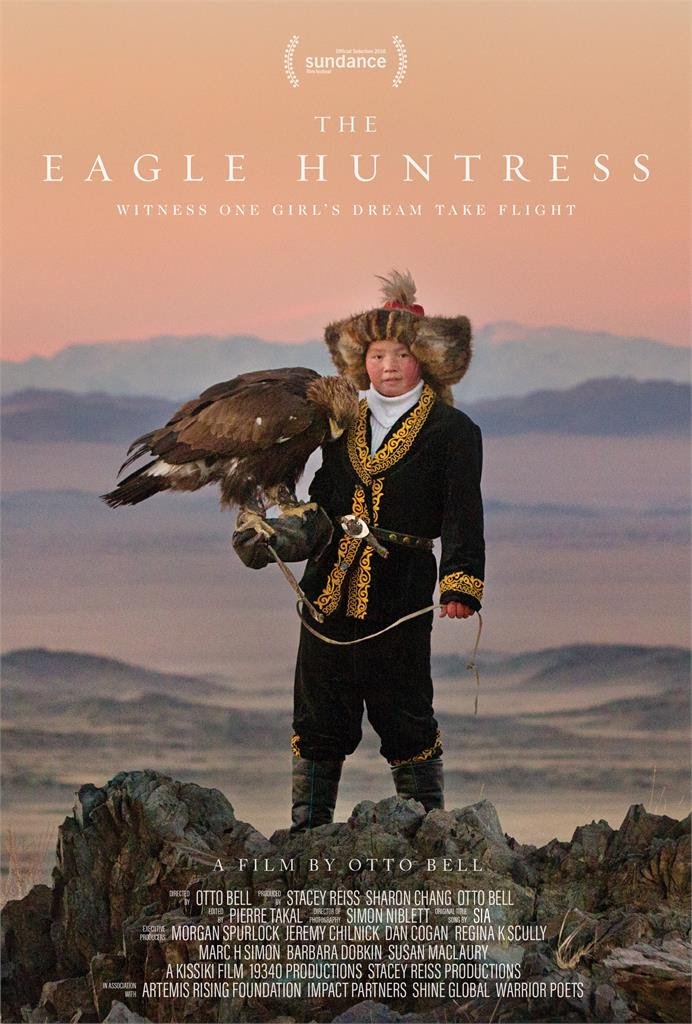 The vast, pristine location of the Mongolian Altai Mountains in Otto Bell’s inspirational documentary, The Eagle Huntress [2016), looks untouched by time. The Kazakh nomadic tribes wandering through the steppe, leading a traditional lifestyle, too seem unaffected by the chaos of modernity. The tribes’ people take useful elements of modernity like radios or motorbikes to enjoy living a life in harmony with nature. The younger generations of this nomadic community get educated in modern institutions, yet maintaining their rightful traditions and customs. The Eagle Huntress’ central focus is on a 13-year old, rosy-cheeked teenager Aisholpan, who embraces certain aspects of modernity, although her ardent ambition is to follow on the footsteps of her father and forefathers and become an eagle huntress, which is something unheard of in the deeply patriarchal society.

For thousands of years, Kazakh tribes have journeyed through the harsh landscapes with their golden eagles to assist them in the hunt for food and fur. Eagle hunting, however, is a sport/occupation considered to be within the range of men. Women have their own duties like milking cows, preparing food and keep the ger (Mongolian nomadic tent) clean. But, Aisholpan the elder daughter to a loving father always taken to eagle hunting and decides it’s time for her to train an eagle on her own. Director Otto Bell got interested in Aisholpan and her family when he came across a BBC photo diary by Israeli photographer Asher Svidensky. Bell says he decided to tell tale of the girl in the photo (after getting in contact with Svidensky) and eventually stumbled on to an powerful tale of female empowerment.


Aisholpan’s father Nurgaiv doesn’t care about the sexist ideologies surrounding eagle hunting and gives his best to make the girl realize her dream. He doesn’t speak big words, but just lowers her down a cliff, held tightly to a rope, in order to get a priced eaglet from the nest. Aisholpan, who has trained with her father’s eagle from the age of 10, gets lessons on how to bond with the bird and launch it for an attack or command it to return. The teenager desires to participate in the annual Golden Eagle Festival. She walks in to festival arena in a beautiful traditional outfit, head held high and a serene smile plastered across her face. Even though the documentary is riddled with crowd-pleasing excesses, I definitely can’t take my eyes off while witnessing Aisholpan’s fearlessness, determination, and sunny disposition. 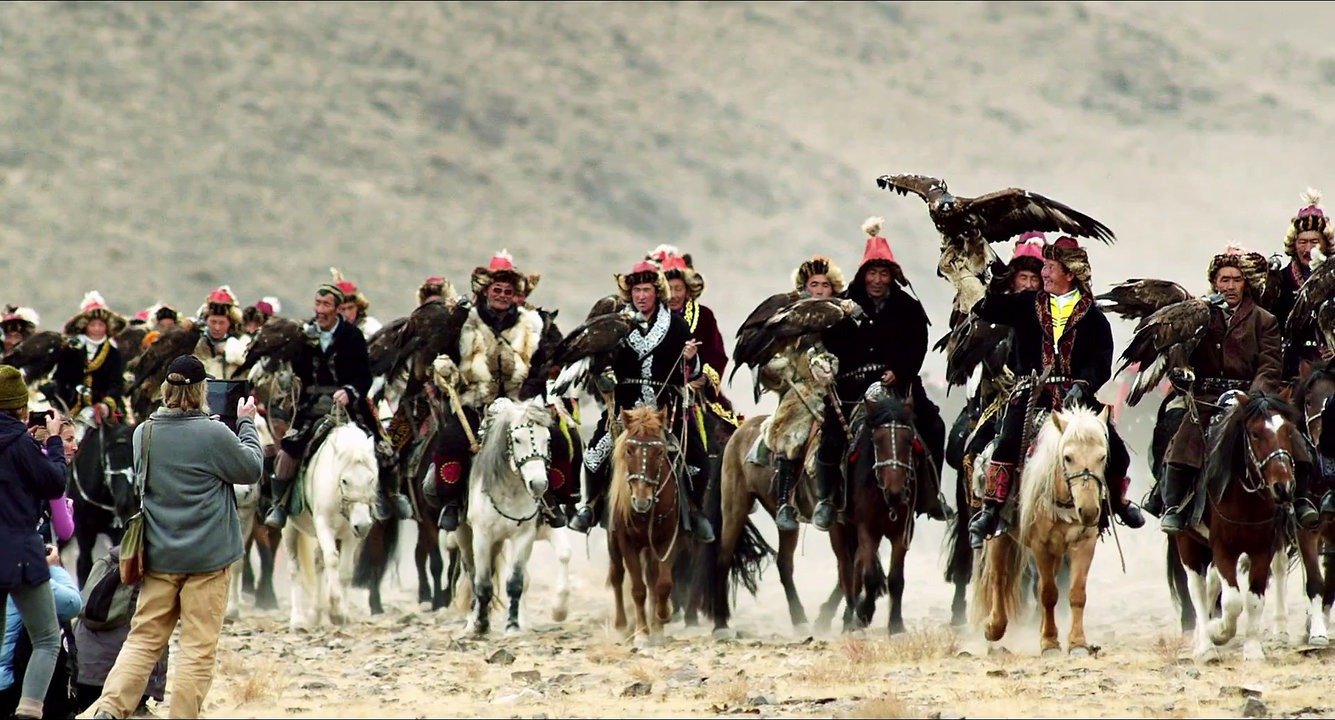 A lot of critics have expressed their skepticism on whether Aisholpan’s story fits the confines of a documentary. Otto Bell was accused of scripting or re-enacting some sequences, especially the high dramatic moment when Aisholpan steals an eaglet. But, Otto Bell has rejected all those accusations and in an interview (to nofilmschool.com) Bell has explained how his three to four-member movie crew has filmed the grand, thrilling sequences due to smart use of the gadgets. There may have been little tweaks in the way certain conversations unfold or some additional inclusions (like the repeated radio announcement about Eagle Festival or slo-mo shots) to exaggerate the dramatic weight for engaging non-documentary viewers.


But, the flaws of The Eagle Huntress mostly don’t rest in its formal choices. The flaws are visible only in the thematic heavy-lifting. Rather than giving some breathing space for the subject matter, Bell often goes for that extra jolt of emotional upliftment. Aisholpan or her father’s ambitions doesn’t boast any agendas. But due to commercial expectations, Bell overtly pushes on the feminist agendas. It’s an absolute contrast when compared to quiet feminism, exhibited by Aisholpan’s supportive family. The montage of elderly men with staunch, archaic views on eagle huntress is definitely witty, but it works only as a means to rigorously impose the girl-power narrative.  Although the grumpy eagle hunters’ views are mostly dismissive, one man considers Aisholpan’s success as a publicity stunt to attract outsiders (Westerners) for the economic gains connected with tourism. It seemed like a very interesting point to me. If the traditional sport has to survive in the modern world, then the presence of Western liberals becomes an essential part (or else it’s attacked by organizations like PETA as ‘barbaric’). Otto Bell, however, couldn’t pursue this line of thought without taking into account the danger of alienating his audience base. 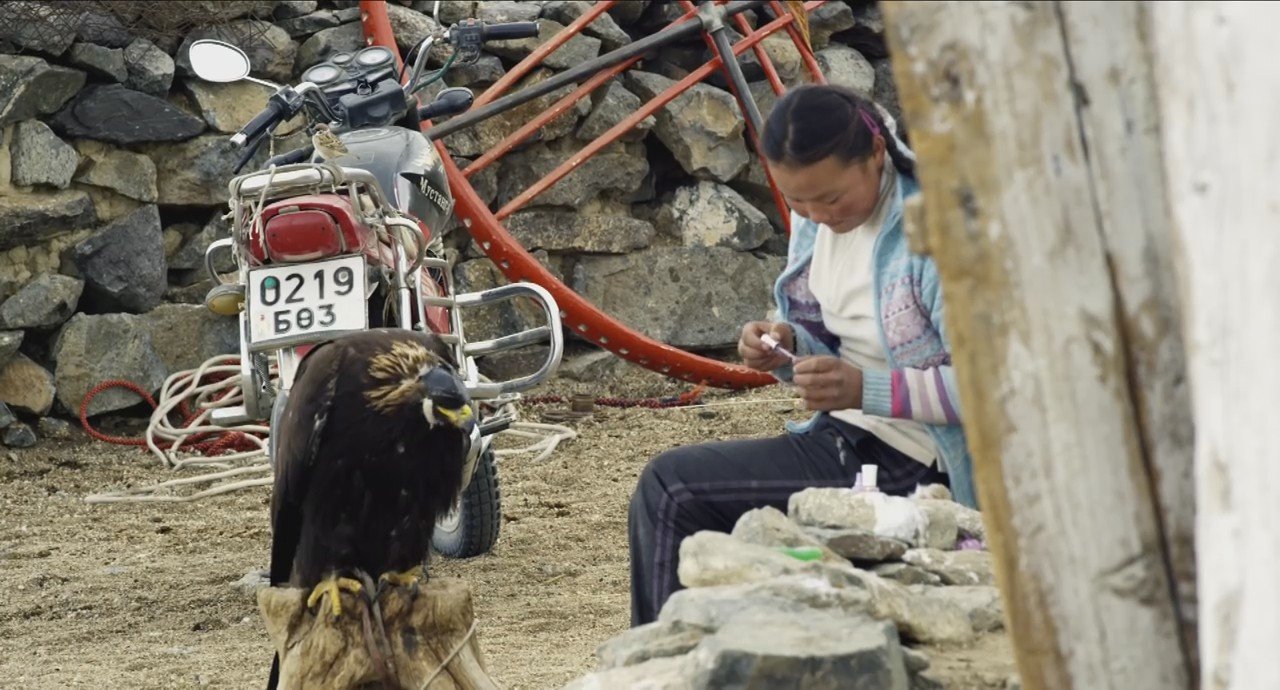 The Eagle Huntress is at its best when it depicts how a determined individual overcomes inherent cultural prejudices to achieve the coveted dream. Director Otto Bell and cinematographer Simon Niblett conjures some thoughtful images that speaks for itself. For example, the image of Aisholpan sitting next to animal entrails, while painting her nails with lavender-color polish or the image of the girl perilously walking through the snow-capped mountain with a horse and an eagle.  Through such images, Bell exhibits how fortitude isn’t restricted on the basis of gender. These simple visuals of a girl and her eagle are more captivating than any grand announcements of female empowerment. We may go on and on, scrutinizing the doubtful formal and thematic choices employed in the documentary. Nevertheless, there’s no way to fend off the charming presence of the confident Aisholpan. The makers may have brought in Daisy Ridley for an unnecessary voice-over (of Star Wars Reboot fame) or an end-credits song by Sia (‘You can do anything’) for publicity reasons and to dry out and display all the message this real story may possess. Yet, I don’t have anything but praise and respect for Aisholpan’s achievement. She makes The Eagle Huntress a rich viewing experience; an unforgettable face of courage, worthy enough to be introduced to the young boys and girls in our family.

Watch the trailer of The Wizard Of Lies : Final Shot At Salvation