While it was earlier decided to be released as an episodic series, Entergalactic is now released as a music television special of 92 minutes of running time. Despite being episodic, this Kid Cudi creation is a worth-watching Netflix movie. Being more popular by his rapper pseudonym, Scott Mescudi has become a sensation in the hip-hop world with his unique humming style and his emo music. With fans ranging from Timothée Chalamet to Kanye West, he has recently gained massive popularity. As a result, this new venture of his was bound to gain traction. Let’s dive right into what the film is about.

The film begins with dreamlike visuals of a person floating in a space filled with everyday objects hovering around. It is a daydream of the film’s protagonist, Jabari (Kid Cudi), who wakes up after a call he gets from someone downstairs. The first chapter, titled ‘Dog Whistle,’ starts with this edgy introduction to this ambitious artist named Jabari, who seems to be relocating to a new place, getting all his stuff packed inside a van. Since it couldn’t fit in, he took a vast stuffed toy to his apartment, holding himself to the new place. After finishing the shifting chores, he goes out to stroll on his bike. On the way, he stumbles upon Meadow (Jessica Williams) near the elevator. But they do not see each other’s faces. 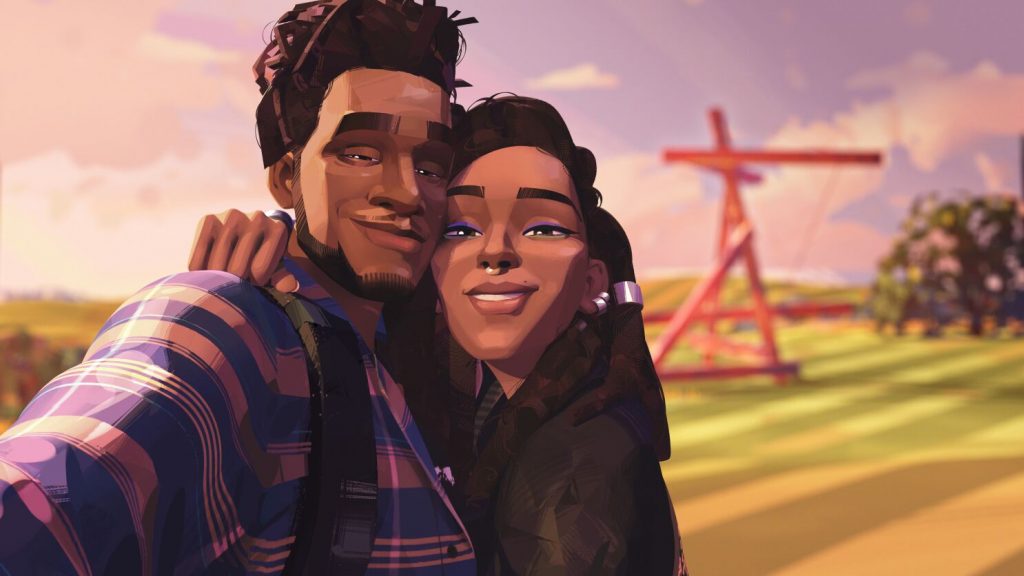 That’s when he runs into his ex-girlfriend, Carmen (Laura Harrier). It seems like they haven’t met each other in a while. So, when she asks for his whereabouts and learns that he is about to take his creation of Mr. Rager (an edgy character he had come up with) to the next level and turns it into a full-fledged comic, she gets surprised and congratulates him. Delighted by this surprisingly pleasant interaction, he can’t help himself from texting her. His friends – Ky (Ty Dolla $ign) and Jimmy (Timothée Chalamet), advise him not to get into that relationship again and to enjoy his bachelor life instead. Yet, he can’t control his urge to contact her, and that ends up on a date. They meet for drinks at a bar and have a romantic night together.

The following day, he ends up in her bed and feels instantly regretful for this choice. He accidentally picks up a call from her mother, who invites him to her niece’s christening. He doesn’t seem to be looking for a commitment, conveys the same to her, and then leaves immediately. On his way home, he has another encounter with Meadow while being oblivious to each other’s existence. The next chapter, titled ‘Bright, Light and White,’ begins right after that. We get a glimpse into her life and know about her being a photographer. Meanwhile, Jabari enjoys drinking and partying with his two close friends.

He wakes up hungover in his office cabin, where he meets a Puerto Rican employee named Len (Arturo Castro), who shows a sense of companionship for both of them being non-white employees. Jabari awkwardly gets along with his act. Len tells him that he needs to get out of his edgy ideas for Mr. Rager (Keith David) and be more white-friendly to get ahead in the firm. It becomes pretty clear that Jabari is deeply invested in the tales of Mr. Rager, and we get a ride through his surreal mindscape into this dreamy world. Jabari speaks with his creation, who utters his catchphrase – Bright, white, light – explaining his new look. He wakes up from his dream and gets out of the Cosmic Comic office to his home.

At his apartment, he gets woken up by loud music from a neighboring apartment. He goes there to inquire about it and gets resisted by a white man named Reed (Christopher Abbott). That’s when Meadow walks in, and he goes into a romantic daydream with ‘Angel’ playing in the background. She wakes him up from this daydream and apologizes for the loud music after knowing he’s her next-door neighbor. While he had initially come to tell her to keep the music down, being smitten by her, he behaves as if it’s no bother! The following day, she knocks on his door, and he awkwardly interacts with her. As a sorry for the previous night, he offers to take him for lunch.

She takes him to a vegan restaurant, and while he initially doesn’t want to end up in one, he loves it when he takes a bite of his delicious meal. This impromptu date/non-date begins a phase of romance between them without their knowledge, and he takes her to a wall where he had first created the mural of Mr. Roger. That is his way of conveying how special she is to him. Later, when they go their separate way and speak with their friends, they get different advice. Ky tells Jabari not to pursue him while sharing his strange past experience. Meanwhile, Meadow’s pregnant friend – Karina (Vanessa Hudgens), encourages her relationship with him.

Later, Reed takes Meadow to a fancy art gathering so that networking can help her with her career. While she initially gets bored, Jabari joins her and lightens up the mood for her. Both get surprised to find one another at that strange vagina-themed party, but they rejoice in each other’s company. They leave the party on Jabari’s bike and have a great time together. The next chapter, titled ‘Punan,’ starts right away and shows the bonding between friends. Karina tells about her wildly sexual night where she couldn’t control her sexual desires for a nice man she was on a date with. That makes Meadow think about her interaction with Jabari, with whom she didn’t end up being that way. After this awakening, their night ends up being passionate about one another, and it begins their full-fledged serious romantic relationship.

Not long after, Meadow sees a picture sent by Carmen wearing his hoodie. Thinking that he’s having an affair, she leaves abruptly and ghosts him. What happened was that Jabari went to Carmen’s place to help her out with a domestic problem. A chapter titled ‘It was Yellow’ starts in the middle of this kerfuffle, and the ‘thumbs up’ emoji sent back by Meadow in yellow color explains all he needed to know. He later goes to Carmen’s place to confront her about the same. She didn’t know that he was in a serious relationship, and while she starts on a defensive note, she eventually feels sorry for her actions. Later, Meadow comes to Jabari’s place to pick up the stuff she left there. While he tries to narrate what happened, it is already late for her to accept him.

An endearing romantic drama with an edgy animation style 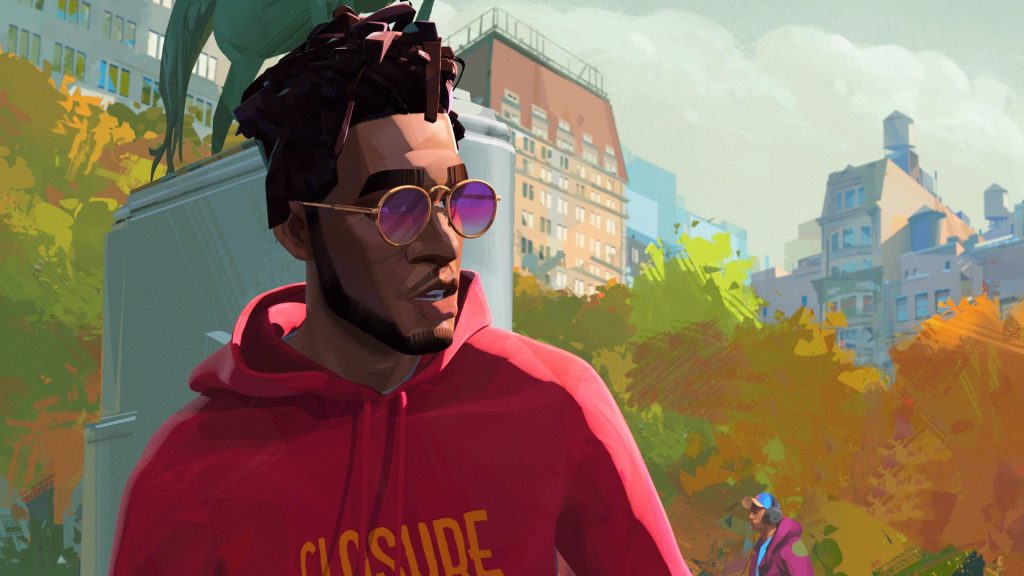 Kid Cudi (Scott Mescudi) has developed more mellow music and emo in nature throughout his career. His humming through hip-hop tracks has given him a vast, dedicated fanbase that claims to have been blessed to have his music for comfort and solace. Through ‘Entergalactic,’ he walks on a similar path in terms of music. There is the same signature sound associated with him that we find here. The music album is as melodic and groovy as always, and this Netflix special accompanying it tells a traditional romance tale with a distinct style that keeps you glued to the screen.

We witness Jabari’s story, who gets an offer to turn his creation into a big project and finds a new rhythm in his life. He moves to his dream Manhattan apartment and tries to adjust to the changes in his life. The duel between his past life and present occurs throughout the narrative, where we find him trying to make sense of his new reality. He has to make wise decisions about his relationships and not be an immature kid who would be any way he wants. He has to understand how to work on the things that matter in his life. He needs to make an effort to prolong their stay.

While there is nothing new that we witness here in the arcs of romance and fame, it touches upon the issues of race, gender, and sexual desires that feel refreshing. The film primarily focuses on how he deals with his ex-girlfriend, Carmen, and his newfound love for Meadow. Besides that, the narrative also addresses his artistic side, which becomes even more critical to navigate due to his black identity. Should he get rid of the fire that ignited the edgy character of Mr. Rager, or should he keep what makes him unique intact? The narrative, which passes like a swift breeze, addresses this internal conflict without a heavy-handed approach.

The music tracks by Kid Cudi are just as addictive for me as his previous work. They seamlessly blend with the groovy and edgy beats of the character arcs and enhance the emotional impact. As a result, ‘Entergalactic,’ directed by Fletcher Moules, becomes an exhilarating adult animation film reminiscent of the enthralling style of Spider-Man: Into the Spider-Verse.

After their break-up, Meadow starts working on her exhibition show, and he keeps up with his routine. However, it is clear that both badly miss being with one another. When Mr. Rager gets a comic book release date, he wishes to tell her this good news. But for some reason, he decides not to send the text. At the exhibition venue, she speaks with Nadia (Danielle Balbuena, aka 070 Shake) about selecting the final photographs. While Nadia loves a picture clicked of Jabari and persuaded her to select it, Meadow has mixed feelings about adding it to the exhibition.

Before the exhibition’s inauguration, Karina tells Meadow to be proud of herself for putting on the great show. She understands that Meadow’s missing Jabari and shares some comforting words. Meanwhile, Jabari’s sister encourages him to try to win Meadow back since she understands how madly he is in love with her.

At the speech for her show, she speaks her heart out, and that’s when she finds Jabari standing in the crowd. She gets emotional about her memories and expresses her wish to go back in time to freeze them for the good times she experienced. While the audience thinks it is about the photographs, it is more about her relationship with Jabari. Afterward, she walks out of the venue and picks a cab. Meanwhile, Jabari also hops on his bike and starts riding in urgency. In the end, both find each other at the vegan joint, where they have their first lunch date – the place that Meadow mentioned to be her happy spot, that she would prefer over a meal from any fancy restaurant. The film ends with their passionate kiss, and the endearing rejoicing shows both characters’ emotional growth.

Where to watch Entergalactic