Home»OTT»Netflix»The Cuphead Show! [2022] Netflix Review – One Of The Best Animated Shows That Offers Barrels Of Fun And Action
Netflix/OTT/Reviews/TV

Movies and shows based on video games are spread across entertainment industries based in various countries. Since The Cuphead Show! (2022) is a North American production, let’s keep our opinions focused on Hollywood and everything adjacent to it. So, North American movies based on video games have been qualitatively duds. Some of them have been revisited and re-appreciate as being campy or hailed as a cult classic. Some of them have earned big at the box office and become “critic-proof” despite being horrendous movies. But the rest (which is a large amount) are bad. Recent North American shows based on video games though have proven to be great, with Arcane (2021) and Castlevania (2017-2021) earning critical acclaim and audience approval. And to be honest, The Cuphead Show! has the potential to do the same.

Created by Chad Moldenhauer and Jared Moldenhauer and developed by Dave Wasson, The Cuphead Show! is based on the run-and-gun shooter video game Cuphead by Studio MDHR. Like the game, the show is set in Inkwell Isle and centred around Cuphead (Tru Valentino) and his brother, Mugman (Frank T. Todaro), who live under the watchful eye of Elder Kettle (Joe Hanna). Now, most of the episodes are like bottle episodes i.e. self-contained stories that don’t have too much impact on the larger narrative. That’s because the larger narrative isn’t all that dense. It’s basically a cat-and-mouse chase between Cuphead, Mugman, and Devil (Luke Millington Drake) which is initiated by Cuphead losing a rigged game, thereby owing his soul to Devil. While in the game, Devil tasked the protagonists with collecting “soul contracts” in order to be spared, the show does away with that and makes the protagonists think on the spot to thwart Devil.

As someone who prefers 2D animation over 3D animation, the biggest takeaway from The Cuphead Show! is the kinetic, colourful, and dynamic update (or maybe return) to the classic rubber hose animation. For the uninitiated, rubber house animation is the first animation style that became standardised in the American animation field. It’s defined by the rubber hose limbs, flowing curves, and lack of angles. This animation style built the backbone of Walt Disney Animation Studios and Fleischer Studios. And in an era where nostalgia is largely being used in non-artistic ways, it is cool to see a show (and the game it is based on) let its animators hark back to the Mickey Mouse and Popeye the Sailor days. But with these new, zany characters. The attention to detail in terms of the character design, art direction, and the usage of what looks like miniature sets on top of which the animation has been done is truly insane. And it’s obviously littered with homages to old animated shorts, with the most noticeable one being ‘Silly Symphonies – The Skeleton Dance’. 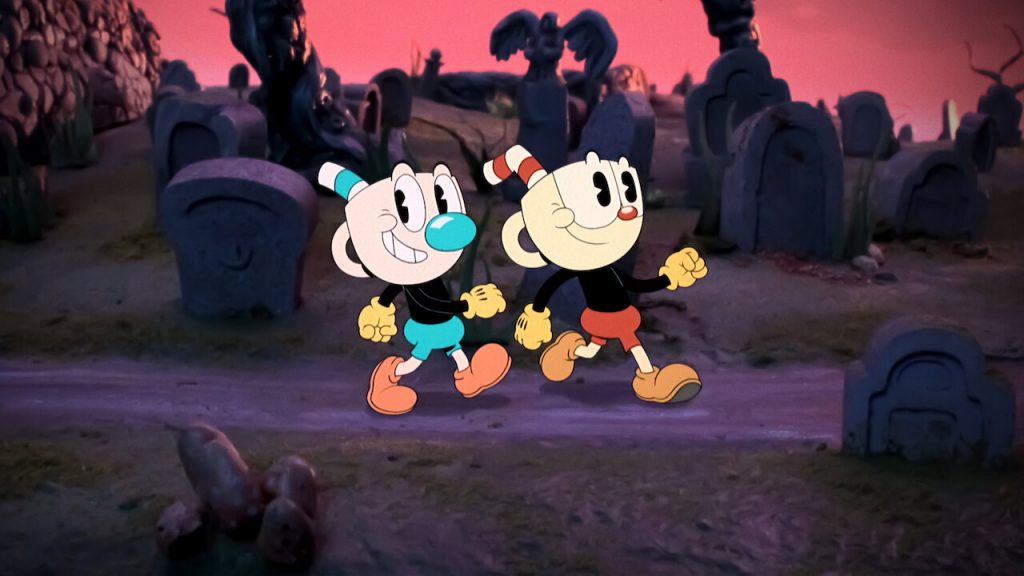 The voice acting largely relies on Valentino, Todaro, Hanna, and Drake’s shoulders and they do a phenomenal job with it. Everything from the enunciation to the pitch is perfect. And it needed to be perfect because there’s a chance that the tone and overall nature of The Cuphead Show! isn’t something that audiences are used to nowadays. As mentioned before, boomers and millennials will probably vibe with it almost instantly. But those who’ve grown up with the modern animation style popularized by Disney and Pixar might find it, for the lack of a better word, jarring. A case can be made based on the success of the game, which was probably played by a lot of Gen Z gamers. However, games and animated shows are two different spheres of entertainment that employ very different techniques for immersing their viewers. They aren’t always interchangeable. That said, good vocal performance has the potential to dissolve those generation and genre barriers, and that’s exactly what happens in The Cuphead Show!

Related to The Cuphead Show: The 10 Best Adult Animated Shows of the Decade (2010s)

Talking about not being used to the overall nature of The Cuphead Show!, the plot. Yes, it’s very loose and hence depends on the isolated slap-stick gags and subliminal messaging of each episode. The overarching narrative about the rivalry between Devil and Cuphead and Mugman is almost non-existent. Again, for someone who has grown up watching animated shows which followed this format of storytelling, everything in the show is rib-tickling and hilarious. Additionally, the themes of parenthood, greed, belief in the supernatural, death, physical appearance, and just nonsensical shenanigans being the centre of each episode actually felt refreshing. But for those who expect a singular storyline spread across multiple episodes, with each episode teeing up the next one, please re-calibrate yourself if you want to fully enjoy the show. This is not a mandate though. Because, by the third or fourth episode, you’ll get an idea of what the writers and directors are going for here. By that time if you’re in, you’re in. If you’re out, you’re out.

In conclusion, The Cuphead Show! is so good that it sends you down the rabbit-hole of, “Why is animation so difficult?” Because if an animation was easy, then there could’ve been hundreds of episodes of this show right now. And we could’ve watched at least a dozen episodes every day, all year, and life would’ve been a little more bearable. But easy animation runs the risk of being cheap and we don’t want that. Which is a roundabout way of saying that The Cuphead Show! is extremely fulfilling and delightful due to its simplicity. It envelopes you in this much-needed sense of comfort and allows you to have a fun time. Therefore, please watch the show and recommend it to your friends so that Netflix gets the message to green-light an endless supply of Cuphead and Mugman’s adventures.

The Cuphead Show is now streaming on Netflix