Home»Reviews»Fantastic Beasts: The Secrets of Dumbledore (2022) Review – A Momentarily Entertaining Entry into the Wizarding World
Reviews

Fantastic Beasts: The Secrets of Dumbledore (2022) Review: Even though the Fantastic Beasts series finds itself included in the wizarding world with shared mythologies, character arcs, political design, and imaginative wonders, it progresses with a certain passionlessness that continuously divorces it from its parent universe. Passionlessness might sound like a hollow adjective inserted to describe a faux emotional response to the film but my use of the word is a conscious act. I sense a lack of passion because the series has banked everything on the premise (a racist wizard seeking a war against the “lesser” race) and have started to care little about the coherence of events. It has also become quite distracted from the world of beasts, something that was promised by the first part of the film.

There still are some beasts in The Secrets of Dumbledore but their presence is that of a MacGuffin or too ephemeral to claim satisfaction of the audience. Despite the complaint, it cannot be denied that one of the most hilarious sequences in the film involves a bed of such beasts swiveling with our protagonist. The stakes, however, were so high and the constraints were so rigid that it was not possible for this sequence to last long, which would have been an entertaining affair.

The question is, what exactly does The Secrets of Dumbledore offer? Jude Law’s experiment with the character is fascinating. It carries the charm and poise of Dumbledore but also has an adventurous side to it, characteristic of a younger self. But Albus Dumbledore, as beloved as he is, is an inconsistent character by the virtue of the films. Richard Harris’ Dumbledore had gravitas but also a warmth specific to the great old men. This is why he came close to being a reflection of Harry’s grandfather in the first two Harry Potter films. Micheal Gambon’s Dumbledore, as we all know it, was more boastful and dynamic. 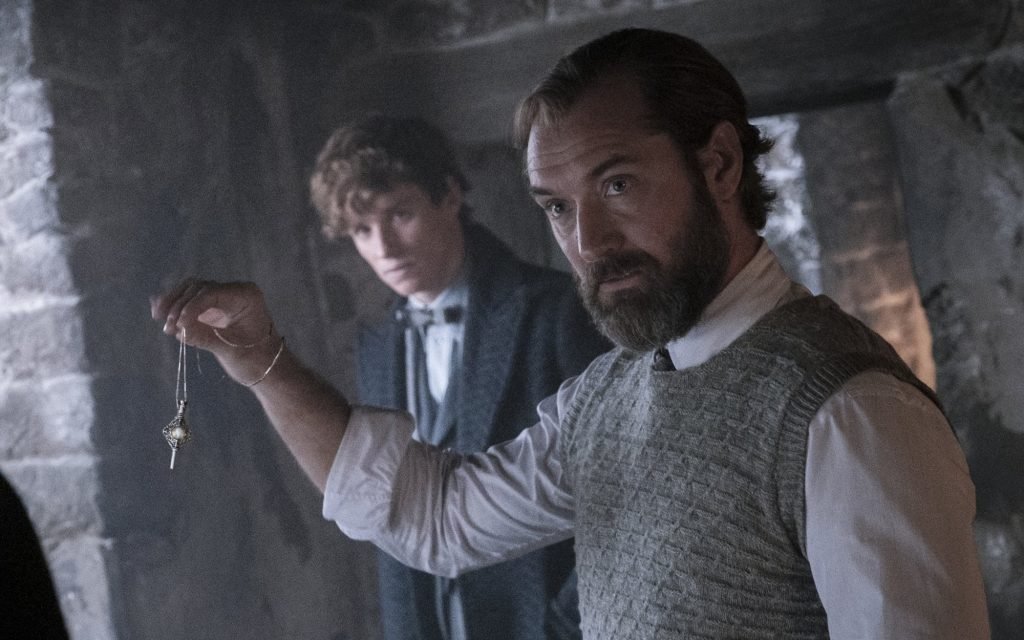 The poise was substituted with the body language of an analyst, and the energy had a tinge of anger as well as foresightedness. Jude Law’s younger Dumbledore has the dynamism of Gambon’s version but also lacks his boastfulness. In a way, he is closer to Harris’ Dumbledore. Dumbledore matters because he takes centre stage in this film. Mads Mikkelsen as Gellert Grindelwald looks more of a politician than a warlock as Johny Depp looked. Mads’ act is incongruent to Depp’s act but meritorious enough to not be complained about. Nevertheless, it might be pleasant to imagine Depp performing the same act in this film.

Related to Fantastic Beasts: The Secrets of Dumbledore (2022) – 20 Years Of Harry Potter and The Sorcerer’s Stone: What Made The Wizarding World So Enchanting

Now, the bigger question is, what all things The Secrets of Dumbledore don’t offer? Its act to stimulate our nostalgic senses is a perseverant one. But the chronology of the universe doesn’t really allow an active effort at nostalgia servicing so it uses reflective imagery at places and pre-establishes what is to be established in the Harry Potter universe later. Perhaps this is why both worlds seem different to me and I fail to see them falling into the same universe. The Fantastic Beasts series is also detached from the non-magical world. It presents to us an integrated magical society where humans are beyond color.

This prevents us from arguing that diversity is tokenistic as multiculturalism is an important facet of these films. This inadvertently implies the liberal superiority of the wizarding world over the land of muggles, which itself is contradictory to everything the antagonist stands for, metaphorically. If it is argued that no such implication is intended then the films become isolated in their universe and the often quoted muggle world gets reduced to merely a propellent in the films with no tangible existence of its own, contributing to the universe. Does it entertain? Absolutely. There is occasional humour, some adventure, and a few action set-pieces glorified with magic. Some portions of this story are critical while some of it seems juvenile. The politics of this magical world is very simplistic. A lot of emphases is given to a person’s quality of being kind, pure, cruel, and evil inherently. It is often argued how a certain character is too pure, while a certain other is too evil. The system in this world has no instrumental role to play on the character of a person. The idea is unsettling to me. The nuance of humans is lost in an attempt of building a model character for the protagonist’s side and a ruthless opportunist as the antagonist.

Fantastic Beasts: The Secrets of Dumbledore can be praised for being efficient with its visual effects. But then again, it is the least of expectations from a fantasy film. It will give you the satisfaction of remaining connected with the world in whatever capacity. However, it is still more of a film manufactured for the market than developed via combined creative effort.