Ghislaine Maxwell: Filthy Rich Netflix Original Documentary: In 2019, when Jeffery Epstein got arrested for the second time, the whole world was stunned by the amount of sickness one man could harbor. A well-respected financier and part of the elite, Epstein seemingly had a normal life. But under this mask of normalcy, he sexually abused hundreds of young girls (most minors) and can be defined as the pure embodiment of the devil.

But, in this sick scheme of evil, Jeffery Epstein was not alone. His long-time associate, British socialite Ghislaine Maxwell always emerged as an aide to him. In fact, she was the one who actually orchestrated the whole arrangements of a prolonged chain of events, from manipulating young girls into prostitution to eventually setting up a sex trafficking pyramid scheme serving Jeffery and other members of the elite circle.

From the early to mid-90s, this debauched scheme of Ghislaine moved on to recent times, and nobody had no clue about it. In fact, when Jeffery Epstein got arrested for the first time in 2008, she evaded the justice system without any mention of her crimes. Being a socialite and well-connected to the elite community has always helped her. As we all know that class can cloud reality, nobody ever imagined she could be behind this elaborate sick plan. But eventually, after the second arrest of Jeffery Epstein and his eventual suicide in his jail cell, many victims came forward, and Ghislaine’s name came on the radar. And after a brief hiding from the authorities, she eventually got arrested on July 2, 2020.

Netflix’s new true crime documentary Ghislaine Maxwell: Filthy Rich is based on this arrest and the subsequent trial she faced, along with the full description of her elaborate scheme from the actual survivors. This article is intended to talk about the documentary in detail. So, be aware as this written piece will be filled with spoilers. 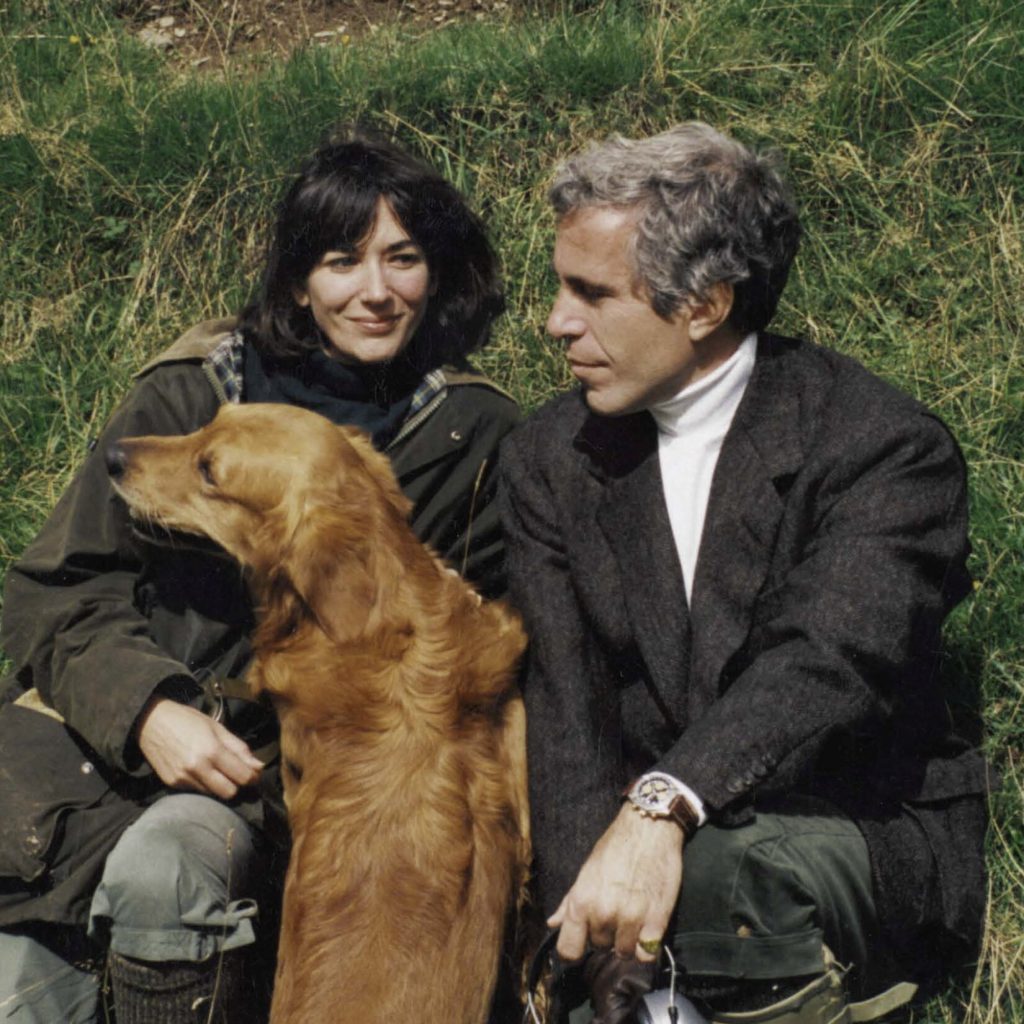 The documentary covers the whole timeline of Ghislaine, from being identified as a well-respected socialite to her eventual indictment to prison. In the narrative form, the director cuts between her past and present, showcasing her evil transformation throughout the years.

The documentary starts with the arrest of Ghislaine Maxwell from New Hampshire on July 2, 2020, nine months after the death of her associate and partner in crime, Jeffery Epstein. Then, we learn the detailed descriptions of the heinous offenses she arranged from the actual victims. The stories are so much disgusting that it feels sick to the stomach. The victims are so traumatized by these incidents that most of them are diagnosed with mental disorders.

Also, due to the influence of Ghislaine Maxwell, many of the victims are scarred even to open their mouths about these gruesome incidents. However, some were brave enough to come forward and raise their voices against her. One of them is Annie Farmar, who, along with her sister Maria had been sexually abused by both Ghislaine and Jeffery when she was just a teenager. Throughout the documentary, she is the only victim (others come forward under pseudonyms) who comes forward to testify in court with the complete revelation of her identity. She becomes a role model (at least the makers try to create out of her) for every victim who has been abused by powerful people with her sturdy attitude and courage.

The film shows Ghislaine’s whole background, from her upbringing as Robert Maxwell’s (influential British media proprietor) daughter to her flamboyant personality. It examines the possible events she faced in her household as a young girl that possibly brings out her evil persona in the future.

It talks about her immense affection towards her father and how she was close to him that she acted more as his lover than his daughter. But in 1991, when Robert Maxwell died, it devasted Ghislaine. And, also during that time, she broke out of her father’s financial debts. During this challenging period for Ghislaine, she met with Jeffery Epstein. They clicked instantly as a couple, but soon the sick side of both of them unleashed. Ghislaine came to know about Jeffery’s sick fantasies. And yet she did everything to fulfill his desires and acted as a madam to him. It is not conclusive in the documentary why she did that. But it examines the possible causes.

It is shown in the film that Robert Maxwell was a very domineering father to all of his children. Despite that, Ghislaine loved her father very much. She was doing everything to please her father as it was her job. Also, Robert Maxwell was very wealthy, and Ghislaine loved that too. But when Robert died, Ghislaine had nobody to please, and also, she lost her wealth due to her father’s debts. That’s when she met Jeffery and found a new father-like figure in him. Also, he was wealthy, and she needed his money. So, she did everything to please him. Also, there are some psychological factors behind this kind of behavior is discussed in the film, but let skip that part for the viewers to explore for themselves.

The film ends with the indictment of Ghislaine Maxwell on five out of six charges brought against her. Though this result serves justice, the heinous acts of a crime she committed and Jeffery Epstein are haunting the victims forever.

Netflix’s new true crime documentary Ghislaine Maxwell: Filthy Rich consists of two adjectives in its title – one is filthy, and the other one is rich. These two adjectives brilliantly describe the real-life criminal story of Ghislaine Maxwell. Her illegal activities are as filthy as they can sicken you to the stomach and her enormous wealthy background covers up her whole debauched scheme of sex trafficking of young girls.

Director duo Maiken Baird and Lisa Bryant tell the story of Ghislaine in a non-linear fashion. While at present, the documentary deals with the trial and indictment of Maxwell, it also digs into her past. It talks about her upbringing in the wealthy household of British media giant Robert Maxwell and the subsequent association with Jeffery Epstein. While the present is examined by interviewing various victims and the attorneys working on the case, the past is described by Ghislaine’s former friends and acquaintances.

The film consists very graphic description of the sexual abuses Maxwell and Epstein had conducted over the years from the actual victims. And, just hearing them, I feel sick in my stomach. But despite those bone-chilling descriptions, the documentary lacks to have a clear vision to talk about the entire case in detail. Thus, the entire film can portray fragmented pieces of a bigger picture where the fault lines are clearly visible. It is not that there is no scope to explore various aspects of the entire case. But they are too surficial to affect you, and often they are presented in utmost negligence.

For example, the aspect of exploring the mental health issues of the victims after their constant abuse by Maxwell and Epstein is just presented as a mere footnotThereere are the stories of the victims. From that, we can understand their mental state after this kind of heinous act. But then what is the significance of interviewing a therapist if they are just being used as a mere showpiece talking about already understandable mental situations of the victims rather than exploring something profound?

Also, there are aspects of how Maxwell uses her influence to cover up her crimes and evade the justice system several times. But that aspect is also quite loosely handled. The documentary mentions these loopholes in the justice system but drastically misses its critical elements.

Another flaw of the documentary is that there is no room for any counterargument. A good documentary always has room for counterarguments, even if it seems wrong. The film talks about the victims and their traumatic experiences. But not in a single instance; it portrays the point of view of the accused or the people by her side. The possible reason is that Ghislaine Maxwell’s family refused to talk in this documentary. But still, it feels the makers try to be diplomatic and avoid any controversy by putting any perspective that favors the accused.

Ghislaine Maxwell: Filthy Rich is an important story to tell. The documentary does a fantastic job of bringing the story of several hundred victims into the public limelight. But in the end, it gets stuck into its flaws and can’t get anywhere near offering something new to us about the entire case and affecting us on a deeper level. 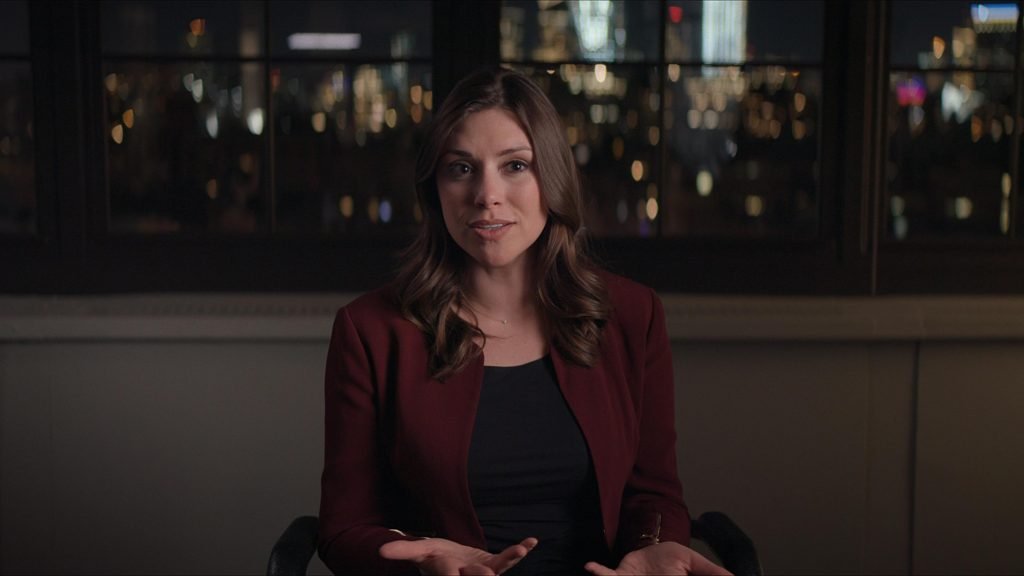 The last act of the documentary showcases the trial of Ghislaine Maxwell. Various victims come to testify against her – some with their identity hidden, particularly one woman, Annie Farmer, with her complete identity revealed.

The trial is showcased by animation and voiceover narration based on the original transcripts. From there, we know that while the victims are sticking to their stories, the defense constantly tries to nullify their narrative by questioning their credibility. It also shows that the attorneys groom their respective clients to deal with the examination and counter-examination battle between the lawyers. And they are precisely the same. So, even with the best effort from the defense, they stick to their narrative rigidly. As a result, the defense’s plan to question the accuser’s credibility backfires.

As the jury concludes, Ghislaine Maxwell is found guilty in five out of six charges against her. The victims are so happy with this decision that it feels like they will be heard after a long time.

In the last shot, we see Annie Farmar buying a new pair of boots. She says that it is symbolic that from now on, she will start a new life, and the shoes symbolize a new beginning.

Despite all these, one question remains prevalent: Is justice being served too late?

After the indictment, the victims indeed get justice. But Ghislaine Maxwell carried on her sick scheme over the decades. She evaded the justice system several times by using her influence. And in the meantime, hundreds of young girls’ life has been ruined entirely. It is true that some of them come forward and tells their stories to be heard. But many more can’t even express their trauma to the outer world. As the documentary suggests, these girls faced several disorders.

Thus, after watching the documentary, I just asked myself the question, is it the story of victory or defeat? Well, the answer can’t be given to blacks and whites. It all depends on which perspective you are watching.