Taiwanese auteur Tsai Ming-Liang is a patron of slow cinema. Urban isolation and individual’s desperate efforts to stay connected are the often repeated themes. His calm characters are the people caught in the cracks of the dislocated societal order. Goodbye Dragon Inn is limited in scope when compared to Tsai’s masterpieces like Rebels of the Neon God (1992), Vive L’Amour (1994), What Time Is It There? (2001), yet it is no less fascinating.

“Cinema is gone. The cinema I grew up with and that I’m making, it’s gone. The theater will always be there for that communal experience, there’s no doubt. But what kind of experience is it going to be? Is it always going to be a theme-park movie?” enunciated Mr. Martin Scorsese recently in an interview. What Scorsese laments about is the diminishing power of images among the younger audiences, perhaps due to over-dependency on superficial technologies or proliferation of visuals. While our cinematic diet has surely been broadened, technological growth has uprooted the distinct aura of experiencing cinema in a traditional movie theater. Thus, the decline of the movie theater (replaced by monotonous structures of glitzy multiplexes) provokes some contemplation on the cinema’s fate. Moreover, the old, slightly decrepit theaters always seem to boast an inner life. And, what could be sadder for a movie-goer than the shutting down of a theater (one that hosts a treasure trove of individual and collective memories)? Tsai Ming-Liang’s slow cinema Goodbye, Dragon Inn (2003) reflects as well as pays tribute to those bygone days of cinema (what Scorsese worries over) when the bond over the images on the big screen was more potent.

Taiwanese auteur Tsai Ming-Liang is a patron of slow cinema. Urban isolation and individual’s desperate efforts to stay connected are the often-repeated themes. Rain and dingy construction structures are his significant visual staples, and his characters remain silent, who dwell in the cracks of the dislocated societal order. Goodbye Dragon Inn is limited in scope when compared to Tsai’s previous masterpieces like Rebels of the Neon God (1992), Vive L’Amour (1994), What Time Is It There? (2001), yet it is no less fascinating. The film takes place in a dilapidated, near-empty Fu-Ho Grand Theater, on the last evening of its existence. It’s heavily raining outside (the roofs are leaking water) and a small group of living beings (and ghosts) watch the last run of King Hu’s martial arts (wuxia) film Dragon Inn (1966). The film opens with a shot that defines Tsai’s oeuvre. A long, static shot pensively watches over the empty seats of the theater. The absence of hundreds of people, who ought to occupy the seats, weighs in on us. Since, it’s been quite a few years since I watched films in such old theaters, the burden was bit more heavy (intently staring at computer monitor has become a routine). 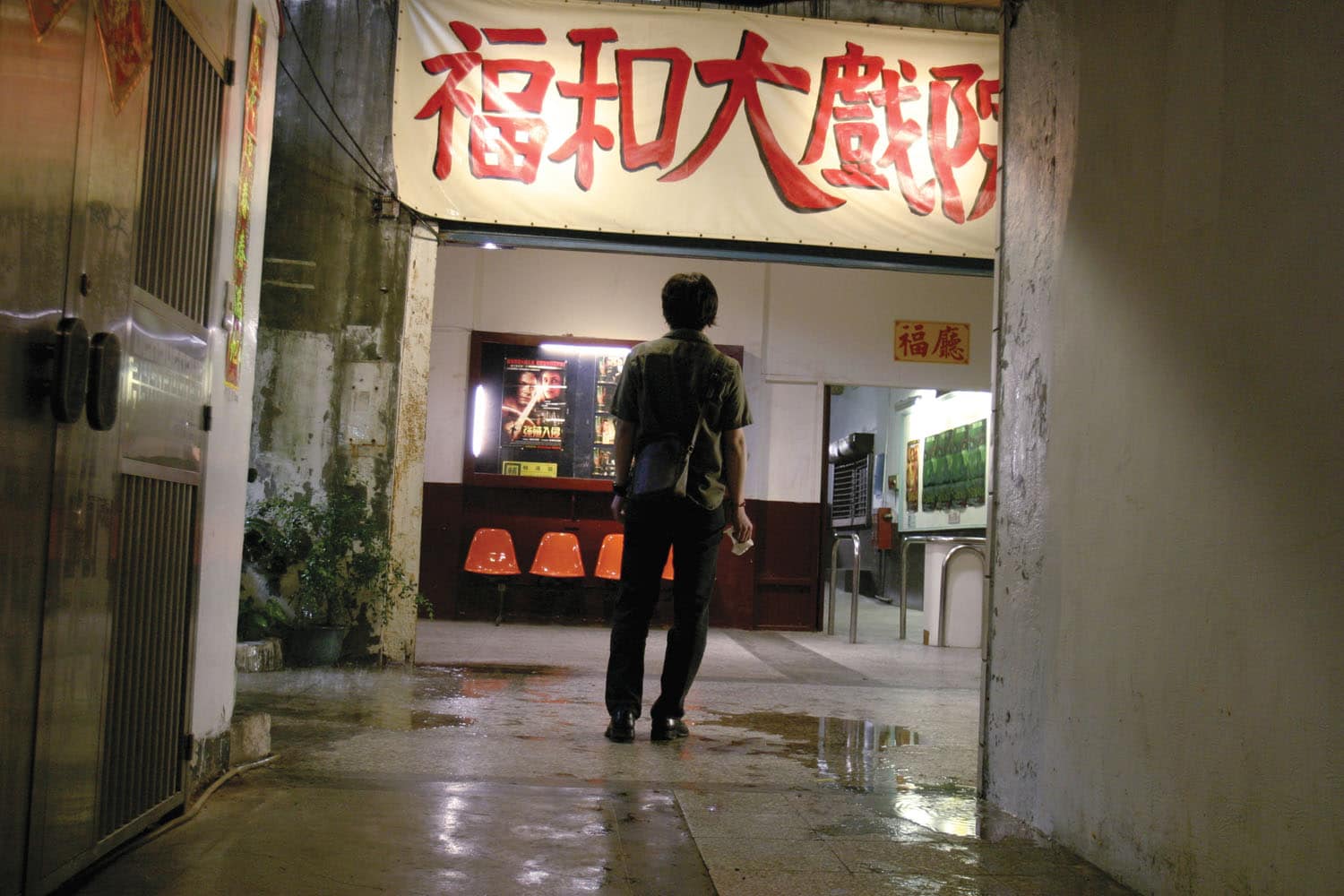 Actor Lee Kang-Sheng plays the prominent character in most of Tsai’s films. But he is nearly invisible in this film. A homosexual Japanese tourist is the central character, searching for human connection in all the darkest quarters of the theater. Tsai’s unique brand of humor involves the tourist attempting to connect with the small crowd of obscure individuals inside the theater. He ludicrously stands in front of a urinal, hoping to hook-up, and later moves into cramped corners of the basement, encountering a shady man telling him: ‘Did you know this theater is haunted?’ (the first line of dialogue in the 44th minute). The other keenly observed character is the ticket girl (Chen Shiang-chyi), a young woman who walks with a limp. She cooks up a sweet bun in her rice-cooker and carries half of it to the projectionist (Lee Kang-Sheng). Considering the theater’s shut-down, she may have decided to express her feelings to him, but she finds the projection booth empty. She sits in his chair and passes off a long longing glace at the slowly burning cigarettes. Among the handful of other movie-goers sits an elderly man and his little grandson. The elderly man bears a strong resemblance to a character in Dragon Inn (because it is played by same actor Miao Tien, who has also appeared in several other Tsai’s films). In the rows above, the lead actor of Dragon Inn, Shih Chun is seated, quietly watching over his younger cinematic self. When they both finally run into each other, Miao Tien sadly articulates, “no one goes to the movies anymore.”

The plot is non-existent in Tsai Ming-Liang’s works. His primary intention is to convey the traces of feelings and emotions, touching past the actor’s faces, through a simple yet profound audio-visual language. Except for the handful of dialogues pronounced and heard from the movie running on the theater screen, Goodbye Dragon Inn wordlessly captures the last breath of a theater with the use of meditative, unbroken shots. It’s not an exploration of loss, but rather zeroes-in on the anticipation of loss – a feeling that’s equally burdensome to the feelings of loss. Tsai’s movie also doubles up as eulogy to this massive communal space, which uncannily makes us remind our precious childhood or adulthood memories. These old memories don’t just bring to our mind the facts about a particular movie; it rather unearths the small private memories or gestures surrounding the theatrical experience – like clinging to the hands of our parents or grandparents, consuming even the simplest images on a screen with wide-eyed wonder. When asked about his childhood, director Tsai said that as a kid growing up in Kuching, Malaysia, he used to visit two old theaters near his grandparents’ house. He further adds up, ‘I still dream about these two theaters’. Goodbye, Dragon Inn partly unfolds like Tsai’s personal dream as we aren’t sure which one of the audiences in Fu-Ho Grand are real and a mere illusion.

King Hu’s Dragon Inn (1966) was Tsai’s most favorite film among the Chinese wuxia fictions (he watched it the first time at the age of eleven). By bringing together the two stars of this old martial arts film, Tsai weaves an elegiac poem. The camera lingers on their face, which is mostly expressionless, except for the haunting welling-up of tears in Shih Chun’s eyes. Their presence brings deep feelings to the plot-less proceedings and avoids sentimental notions. Except for the mournful (last) sequence involving the two veteran actors, the movie mostly conjures static shots, held for a very long period of time, to convey the inner life of Fu-Ho theatre (or as Tsai says, ‘memory of a movie theater’). The strength of these extended shots to observe theater’s quiet life is that the film doesn’t settle into tone of nostalgia. Tsai knows even nostalgia has a termination date as we continue to move from one urban space to another, forgetting or distorting the memories we made in each spaces. The non-malicious spectral beings encountered in the theater (by the Japanese tourist) could be viewed as theaters’ echoes of memory. Similar to the way we fill our inner emptiness with good memories, and (maybe) the theaters’ ghostly presence is a means to fill in its desolate, empty physical spaces (the quietness when the ticket girl slowly stumbles across the empty auditorium towards the end was so haunting). Despite the sorrowful undertones, director Tsai’s films are far from being gloomy. He extracts subtle humor from the Japanese tourist’s desperation and instills a sense of hope in the ticket girl’s plight (after the projectionist finding the girl’s bun and rice-cooker looks like hopeful sign).

At 82 minutes, Goodbye Dragon Inn can definitely impart frustration. But, over the years, similar to other Tsai Ming-Liang movies, this one has also grown up on me after repeat viewings. Since I have learned to adjust to the director’s very slow pace, ‘Goodbye, Dragon Inn’ bestows a very hypnotic and thought-provoking movie experience. It’s an elegy for all the crumbling theaters and the vanishing form of the movie-going experience. Super-hero movies may continue to rake in millions in multiplexes, but the cinematic experience Tsai or Martin Scorsese treasures is nearly extinct.

For Your Consideration: Sita Sings The Blues [2008]

Before Sunrise [1995]: A beautiful love poem