Religion is a man-made construct to make sense of questions that science hasn’t answered yet and to hold a place of superiority by creating divisions and spreading fear. A million or even a billion people, armed with pitchforks and unscientific, anecdotal evidence, saying otherwise doesn’t change that. Religion works fine on a personal level when individuals manage to understand the spiritual side of it all. But when it devolves into organizations encroaching on private and public properties, and eventually into every profession, then things get dicey. About two months ago, Mike Flanagan’s Midnight Mass (2021) delved heavily into this aspect of religion. And now Hellbound (Season 1) is here to do the same, albeit through the lens of a procedural drama.

Hellbound, premiered at TIFF,  is directed by Yeon Sang-ho and written by Sang-ho and Choi Gyu-seok. The series is based on the webtoon, The Hellbound, written by Sang-ho and Gyu-seok and revolves around a string of unbelievable killings, dubbed as demonstrations, taking place in the middle of Seoul. These “demonstrations” involve mysterious beings condemning people to hell, followed by a bunch of hulking monsters appearing out of nowhere to burn the condemned to a crisp.

The inexplicable nature of these events gives rise to the commanding voice of Jung Jinsu (Yoo Ah-in), the leader of an up-and-coming religious organization called The New Truth. Jinsu’s sermons lead to the formation of the Arrowhead, a group of fanatics willing to punish anyone going against the divine will. And amidst this nonsense, we follow Min Hyeijin (Kim Hyun-joo), a lawyer who goes up against The New Truth, and Jin Kyunghun (Yang Ik-june), a police detective who unintentionally gets way too embroiled in the investigation of these hellish “demonstrations”.

Related to Hellbound: Train To Busan [2016] – A High-speed Ride With The Undead

Despite having a trio of brilliantly designed CGI monsters (which are shot, composited, and lit to perfection in every frame they are in) who are capable of wreaking a lot of havoc, Sang-ho and Gyu-seok don’t make them the primary antagonist. They merely serve as the backdrop. Instead, they shine the light on the section of the South Korean population who are using this unprecedented situation to put their violent, vindictive side on display. In doing so the writers ask why is this our default behaviour? 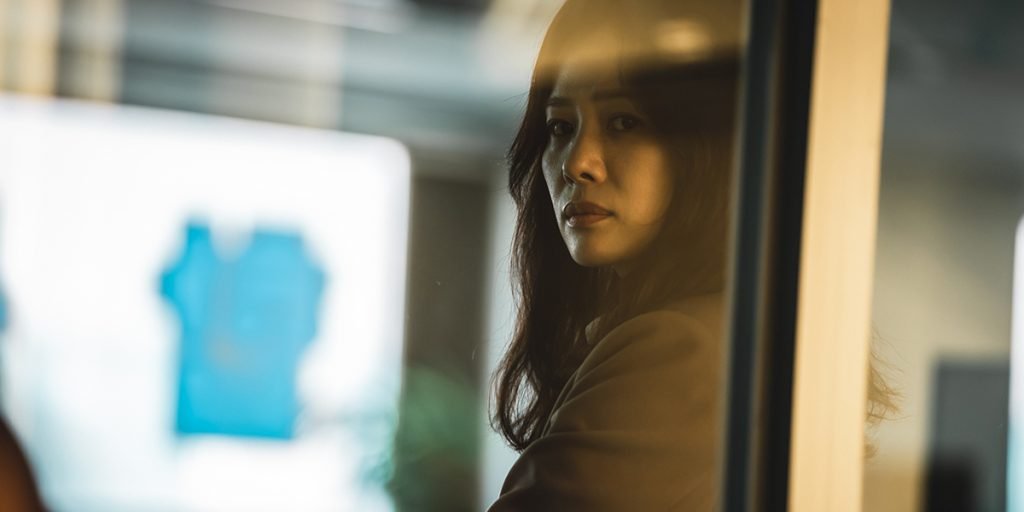 When something out of the ordinary happens, why do we panic and follow self-proclaimed messiahs who definitely know as much as we do? Why do we run to vilify, even lynch, people who dare to question anomalies and turn unscientific statements into gospel? Why don’t we unite under the umbrella of science, reasoning, and basic humanity to fight whatever is threatening our existence? And while the writers don’t really mention it very explicitly, they make it abundantly clear that the answer to all those questions is insecurity.

Aided by Byun Bong-sun’s cinematography and Han Meeyeon and Yang Jinmo’s editing skills, Sang-ho paints a vivid picture of how volatile we’ve become due to technology. Hellbound shows us that an invention that was meant to educate us has now become a tool for creating cults, inciting mob violence, misrepresenting facts, or turning blatant lies into the truth. You can say that it has become the new religion with the new god being the unwavering presence of a cell phone, a laptop, a television screen, a CCTV camera, or just a simple camera, all tied together by the internet. Physical media such as newspapers, books, reports, things that need deliberation before hitting the publish button (something that you don’t necessarily require in virtual media, especially when your purpose is to promote paranoia and inhumanity), are almost invisible. And the result of this disconnect and hastiness is visualized by some of the most brutally conceived scenes, filled with puke-inducing make-up, bone-crushing stunt work, and immaculate sound design.

While the narrative and visual storytelling in Hellbound are perfect, the show’s greatest asset is probably its uber-talented cast. As one of the audience surrogates, Ik-june brings a sense of melancholic gauntness to Kyunghun because he’s perpetually mourning his wife’s untimely death. Although he has his daughter to live for, Ik-june portrays Kyunghun as this soulless vessel moving from one place to another. And his awakening due to this new threat, which pulls him and his daughter into the mix, feels bittersweet as Ik-june hints at Kyunghun’s affinity for that constant blanket of sadness. Hyun-joo initially plays Hyejin in a straightforward manner, channelling a lot of empathy and confidence into her character.

But eventually, she begins to peel away the layers on Hyejin to reflect the anguish and despair one will feel when their own countrymen turn on them because they are afraid to face the truth. Yoo Ah-in as Jung is incredibly punchable and yet immensely charismatic. Kim Shin-rock’s performance as Park Jungja is absolutely heartbreaking. And since everything about the other characters is pretty spoiler-y in nature, let’s just restrict the applause for them to the fact that every single actor in the show has knocked it out of the park.

Hellbound has been marketed as this supernatural horror show with tons and tons of violence. Which it is. There is a lot of blood. The creatures on-screen are scary. There are a lot of triggering concepts on display. There is no doubt about that. But for the most part, it is a serious, introspective, and beautifully paced drama. It is haunting in the sense that Yeon Sang-ho and Choi Gyu-seok accurately capture what happens when religious fanaticism makes its way into our daily life and becomes a source of problems rather than solutions. And watching all this as an Indian who is seeing religious oppression, religiously fueled attacks, and bigoted hate speeches from public figures on a daily basis is legitimately nightmarish.

The only thing more frightening than that is the notion that all this cautionary subtext embedded in the show will be lost in a wave of memes, reaction videos, and merchandise. That’s what happened with Squid Game (2021). Let’s hope that it doesn’t happen with Hellbound.