Honor Society (2022) – Review, Themes Analysed and Ending Explained: The Seemingly Finality of Rejections: Just like its protagonist, ‘Honor Society’, released on Paramount+, is neat and smart. Director Oren Zegman and writer David A. Goodman (‘Family Guy’) have collaborated to produce a zany and confident story that works both as a high school drama and a dark comedy, with the fast-paced narrative of a heist movie. Lead by an unerring performance from Angourie Rice as Honor, this constantly-breaking fourth-wall film hardly skips a beat in its pulsating exploration of the cutthroat competition that comes hand in hand with education these days.

Honor Rose (Rice) has only one target in her final year of school. To get into Harvard. By hook or by crook. That is her coveted getaway ticket from the town she is in, which she deems unworthy. Her determined efforts to avoid mediocrity have her mastering Karate, acing all her school subjects, participating in pledge drives, and even sweating out on the basketball court. It is not that she is particularly passionate about any of those, but they are the means to follow her passion. Which is, again, not being branded as mediocre by getting into Harvard.

For that Honor needs to fraternize with the thirty-something guidance counselor, a certain Mr. Calvin (Christopher ‘McLovin’ Mintz-Plasse of ‘Superbad’ fame). For Honor, there is nothing dishonorable in her quest to Harvard. Calvin here holds an ace up his sleeve in the form of his Harvard alumni friend. It is for that simple reason, for that one recommendation letter from Calvin, Honor not only butters the sleazy music enthusiast but also puts up with his inappropriate remarks and offers.

However, even after all that, Honor finds that she is not yet Calvin’s absolute favorite to get the desired recommendation. There are three more candidates that are in the running. The asocial but bookishly brilliant Kennedy (Amy Keum) who dresses up each day as one historical figure but with literally zero friends, the high school heartthrob and great-at-sports-and-also-at-studies Travis (Armani Jackson); and the shy and reticent ‘Dr. Who’ fan Michael (Gaten Matarazzo of ‘Stranger Things’).

So, Honor does what brilliant but scheming overachievers generally do. Sabotage by manipulation. Honor befriends Kennedy and finds her interest in becoming a playwright. With some clever maneuvering, she gets the play written by Kennedy to be the play that gets adapted for the next production of the school theatre group. She quickly finds out that despite all the machismo and the pretty girlfriend, Travis is secretively gay and quite interested in Gary (Ben Jackson Walker), the flamboyantly gay and pedantic director of the same theatre group. So, Honor schemes to get Travis cast as the lead of Kennedy’s play.

Honor’s plan to get her competitors thoroughly involved in things they would love so that they would slack off in their midterm exams started to show results except for one. Michael seems to be the toughest nut to crack. Honor not only befriends but also mildly seduces him, and gets him involved in the will-they-won’t-they dynamic. However, not only Michael does not show any sign of regressing in his academic prowess, but Honor herself seems to be drawn toward him despite her early reluctance. 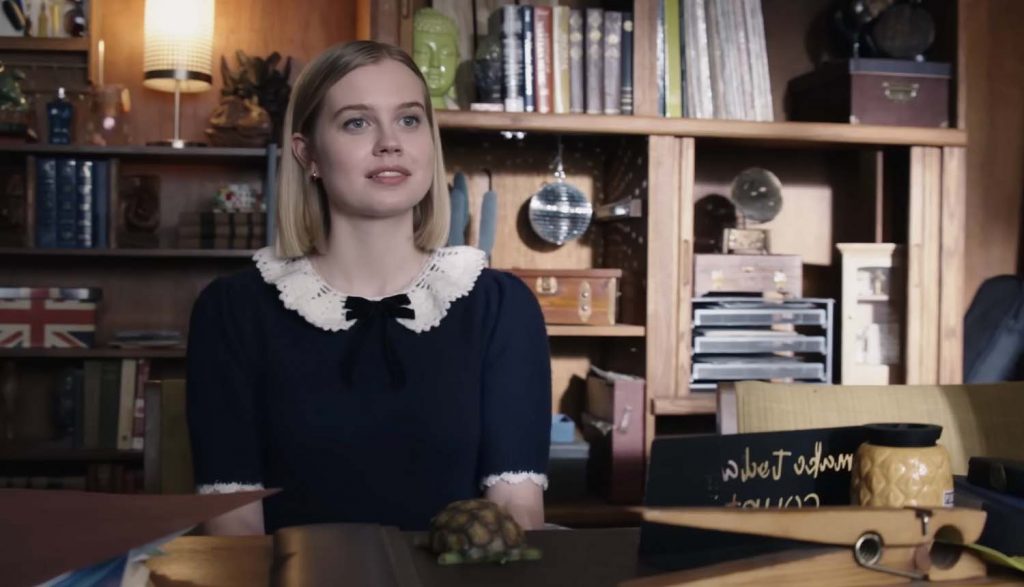 Debbie Lum’s Sundance-selected documentary of last year, ‘Try Harder!’ would be a great companion piece to this film. The documentary, more serious in tone, focuses deftly on college admissions and the dream-shattering heartbreak that comes with it. It explores the seeming finality of rejections and the toll that takes on the mental health of any young student. Just like ‘Try Harder’, Goodman’s story here also tries to give a glimmer of hope on the other side of rejections, albeit in a much more comedic way. The abject fear of missing out on excellence with the horrid possibility of being ‘average’ is negated by Honor’s cheery acceptance which absolves the supposedly ‘mediocrity’ of her life.

Angourie Rice is electrifying in her role with just the right amount of hint of likeability. We are not exactly supposed to root for her, but there is just enough twinkle in her eye in her fourth-wall-breaking assured presence that one cannot help but not want her Honor to fail in her schemes either. The rest of the cast does not falter either. Zegman and Editor Anita Brandt Burgoyne also show sure-footed confidence in their scene construction, without which the fourth wall breaking would not have been a seamless facet of the film.

After observing Michael getting into a house in the shadier part of the town, Honor asks him about that. Michael tells her that he lives in a foster care home. That is the moment Honor starts to question her predetermined schemes. Much to her own annoyance, she begins to care for Michael. And just like Travis and Kennedy, Honor also starts to wonder about the hitherto unfathomed possibility of a life without excellent grades. Honor’s change of heart is confirmed when she does not drug Michael, despite intending to, before the midterm exam day.

Did Michael pretend all the way?

As a result, Michael gets ahead in the competition of getting Calvin’s recommendation letter, which Honor does not seem to mind anymore. She is much happier in a relationship with Michael. However, the story delivers its final twist. After the midterm exam, Michael starts to avoid her. When Honor goes to the foster care home, she gradually starts taking the path of uncovering the truth. Michael lied to her about living in a foster care home. Instead, he lives with his parents in a much grander house.

Michael, in his own words, admits he is not a nice person. Breaking the conventional genre trope of geeky and bullied introverts always being good. He simply wanted to go to Harvard and for that, he garnered care and pity from Honor by making up the story of living in a foster home. The house he visited is not a foster care home, it belongs to his housemaid. All the while Honor was trying to sabotage others, without realizing she was also a target of sabotage from Michael.

Who gets the Harvard Spot?

Heartbroken, Honor quickly finds solace in the forms of her newfound friends. Kennedy, Travis, Gary, and other theatre students quickly make Honor see what she achieved. She made Kennedy find her passion and Travis accept his own truth. Looking at them, Honor also realizes that there is no sabotaging true passion and friendships.

As a result, she finds her previous zeal. She reveals that she had previously recorded Calvin’s one of the more apparent sexual propositions. She had planned to use that by blackmailing Calvin into giving her the recommendation letter. She does encash that. However, she asks, not for herself, but for Kennedy. It is evident that Calvin would have no choice but to listen to Honor, so Kennedy gets the Harvard spot. And unless we get a sequel where Kennedy is revealed to be a mastermind with the grand scheme of pretending to be asocial, she gets that on merit.

Related Article: Not Okay (2022): A Dark Comedy on the Social Media Fame Trap

Where to watch Honor Society