I Was A Simple Man [2021] ‘LAAPFF’ Review: Hawaiian Ghost Tale is Layered and Meditative

The fact that death is inevitable is the greatest example that for humans, nothing is impossible. Simply put, dying isn’t simple at all. And yet, here we are. Death looms large on Honolulu-born filmmaker Christopher Makoto Yogi’s perceptive third feature film I Was A Simple Man (2021). The film derives its plot from Yogi’s own 2011 short film Obake.

On the surface, the life of Masao might feel cool and laid-back. However, the reality is far from it. The old man is losing himself to the clutches of death. His life, far from the Hawaiian mainland, has a stillness but is equally unsettling. The man had lost his wife quite a long time ago. He has been warmly received by his extended family for a feast, which is extremely happy. However, the truth can’t be farther- it is for his last good-bye. At the same time, he is being visited by the alluring ghost of his long-lost wife Grace. The woman emerges from the nearby tree and cascades back after putting him to his last passages of sleep. Throughout the course of running time, the past is an all-encompassing entity that is hard to resist.

This story is told in four chapters. This helps a great deal because the pastoral countryside exudes the flavors of a compelling folktale. The allure of the ghost tale reminds you of the progressions in an Apichatpong Weerasethakul film. However, that mostly limits itself to the aesthetic. There’s the heart of an Ōzu film that makes it so fulfilling. The film, in its entirety, is English, and it unapologetically satirizes the same. However, the language and lyrical dialogue are never out of place. In fact, it grants the film, in some strange way, the soul of an enchanting David Lowery film.

However, none of these influences deny the sharp original mastery of Christopher. He exerts a fantastic grip over his atmosphere. More importantly, he knows just how much of a control a director needs to have over his actors. His Hawaiian world-building has a freewheeling charm with characters of great feeling. There’s a searing sense of fluidity here. Nothing feels the slightest orchestrated or synchronized. The abrupt humorless nature sticks out interestingly. A sense of bleakness present in Masao’s life has invaded the otherwise beautiful north shore of O’ahu. 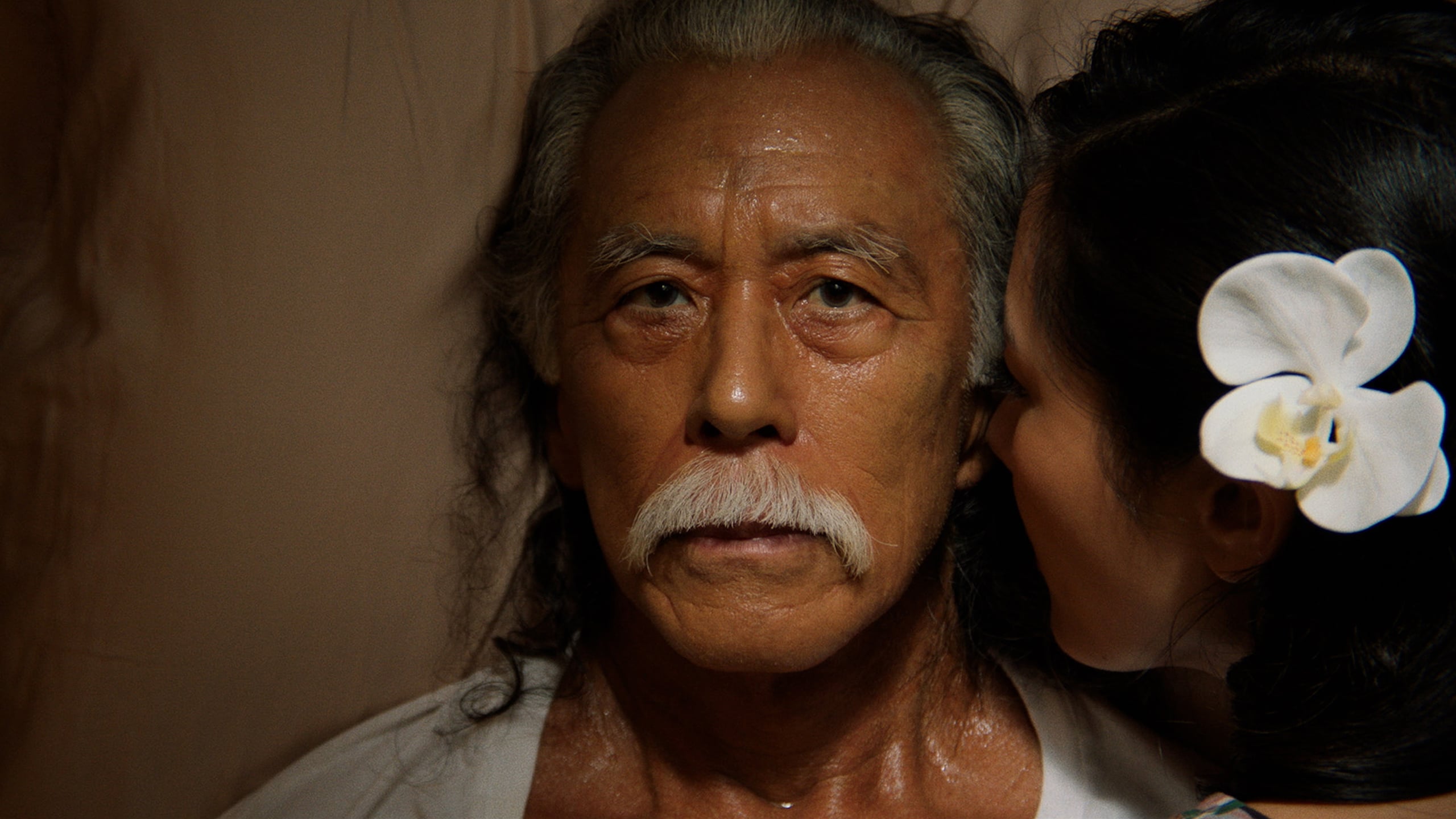 The incredible visual grammar repeatedly informs the film. It doesn’t necessarily follow the A24 formula to construct fascinating landscapes. In fact, even the night scenes are full of lush, bright colors and floral patterns. But they never feel too animated or lively for the sake of it. The cinematography is particularly rousing in the flashbacks on Masao’s own past. I really liked the scene in which a Japanese doll and a Chinese doll, which means something for Masao and Grace’s love, creep out their grandson. Scenes capturing the mental state of Masao particularly are exquisitely filmed, predominantly as night shots. I really liked how actors and their faces are blended as a part of the larger visual and aural panorama.

Above anything that it is, I Was A Simple Man is an enthralling ghost tale. There’s an enchantment that permeates through each and every scene. Now, this is less attractive and more haunting. What confirms this is the two fantastic leading performances. Late newcomer Steve Iwamoto has a classical restraint of a veteran. As Masao, we get to see his fading life through his physicality. We get that it’s hard for him to make sense of his own reality. This performance never feels fabricated or too quiet for the sake of it. The delivery of dialogue by him is pure gold. Tim Chiou as a younger Masao has an unfiltered, surprising quality to his performance. It is surprising because it seems fully aware of the older self to become, and we don’t often get to see that.

However, the best performance of the film belongs to the beautiful Constance Wu. The Crazy Rich Asians star has toned herself down to play a ghost in a spectacularly enriching manner. I’ve never seen a ghost performance as humane and charming as that of Wu as Grace. She exudes such a positive, caregiving aura to the film that this almost feels like a Christian allegory. However, it is far from divine. Quite rightly, it has a terrific supernatural rhythm to it. I loved it. This is the most pitch-perfect supporting act I’ve seen this year.

The ritualistic climax is the most compelling finish it could have afforded. Although I did feel that it existed to brush things up a little quicker, it cannot be denied that the imagination is thrilling. I Was A Simple Man is a meditative and alluring ghost tale that reveals a lot more layers than it initially lets on.

"Crossing Bridges" to "Killa": Nature as a character in films

I Was A Simple Man [2021] ‘LAAPFF’ Review: Hawaiian Ghost Tale is Layered and Meditative