Infinite Storm is a 2022 film directed by the duo of Małgorzata Szumowska and Michał Englert. It stars Naomi Watts in the leading role who is known for her brilliant performances in many films such as Mulholland Drive. In this film, she plays the role of Pam Bales, a search and rescue volunteer, who belongs to the Pamigewasset Search and Rescue team. Besides her as the lead and the primary focus of the narrative, the film also stars Billy Howle, Dennis O’hare, Parker Sawyers, Eliot Summer, and Joshua Rollins. Based on a true story of real-life Pam Bales, the film depicts a devastating incident that involves incredible bravery displayed by her. The length that she goes to save a person’s life through tumultuous situations becomes the catalyst in the story for their change of character.

Written by Josh Rollins, the screenplay has been adapted from an article called ‘High Places: Footprints in the Snow Lead to an Emotional Rescue’ by Ty Gagne. The film primarily tells the story that happened in a single day when Pam goes on a hike taking her to the top of Mount Washington. Her day unfolds in a mundane manner, which she seems to have gotten used to over the period. Before going on this trek, we get a glimpse into her character through regular everyday situations which describe the same notion. We also sense a feeling of care others feel for her and that she feels for others.

When Pam heads to the snowy mountain, she treks through it like it’s a usual affair in her life. With the help of cinematography, we are shown her minute existence in these wide, all-encompassing landscapes that she insistently takes on as a challenge with her sheer will. On her way to the top of the mountain, she is caught up in a fierce snow storm that halts her progress. Before she goes on this trail, she is told about the possibility of a blizzard on the mountain. But she still chooses to go on the hike. Amidst the terrifying wind storm, she finds a person lying in the snow. With her natural instinct, she goes on to save this person and because of him being unresponsive, decides to call him, John. 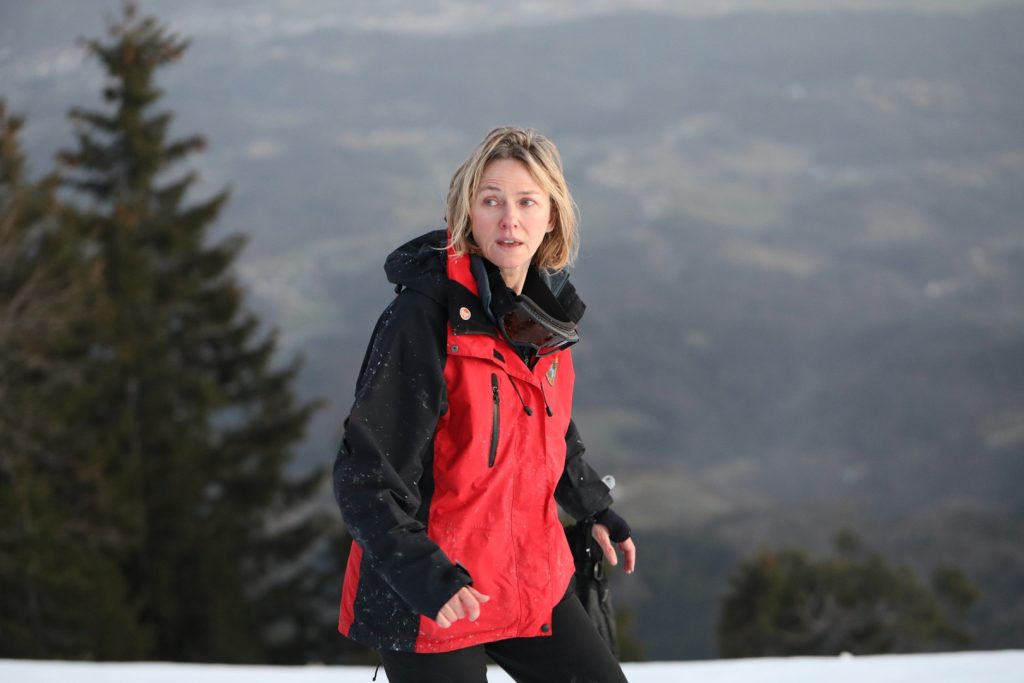 The further duration of Infinite Storm shows her attempt to take John back along with her and to escape the bone-chilling storm. Their path brings several conflicts in their way, both external and internal, that make them take a pause, speak with each other besides the topic of escape, and gather the will to tackle the challenges in front of them. Going down in such a situation is no joke. On top of that, their internal conflicts hinder their progress and make them look at this situation from a broader perspective. We get glimpses of the loss Pam has gone through in the past, which builds a background for her character and her maddeningly passionate and humane pursuit.

And throughout this journey, what holds your attention as a viewer is the fantastic performance by Naomi Watts. Her raw performance heightens the tension in the film and conveys much more than what the script entails. While the screenplay beautifully weaves the themes of loss, survival, and a purpose to live, her performance keeps you emotionally invested in the pathos with a grounded approach. With a chance encounter in her life as well as John’s, their lives take a turn in a different direction than what they expected them to be. Their discovery of purpose in their lives makes it a deeply inspiration tale. The way the film conveys how human compassion makes you see more than what lies in front of you is impressive.

Yet, what the film lacks is its exploration of larger themes. Infinite Storm is sadly not more than a riveting recollection of this situation. The narration builds the thrill and drama that goes into this trekking process in an understated approach with its camerawork and incredible sound design. The winds echo in your mind and help in building a thoroughly immersive experience. But besides placing you right in these circumstances, the film does very little to illustrate the larger value of its narrative. Its bigger themes get dwarfed in terms of exploration and stay limited at the level of mere introduction.