Jane the Virgin is an award-winning American romantic comedy-drama series and after a successful Season 1, Romedy NOW brings the Season 2 from July 21, 2016 at 7PM. Season 1 of the series ended with Jane Villanueva (Gina Rodriguez) delivering the baby amidst much emotional turmoil and dealing with differing opinions from her mother and her grandmother. Adding to it, is her latent confusion to stay with her boyfriend or marry the biological father of her child, who is already married.

The second season is all about Jane, as a character, settling into her new role as a single, first time mother, her emotional state and her journey to find herself amidst the complex relationships and demands as a new mom. 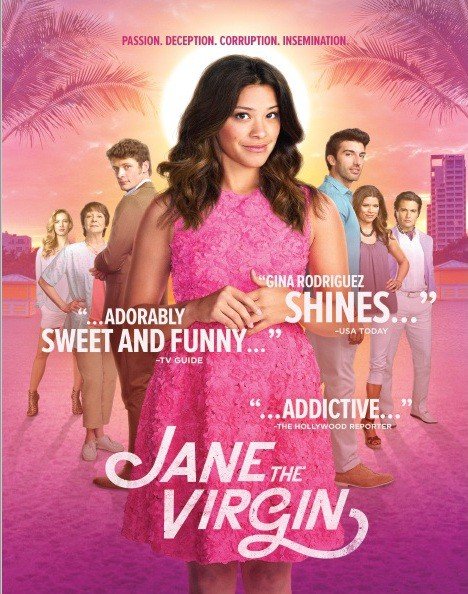 Interview with Gina Rodrigues, lead actor who play Jane in Jane the Virgin, talks about the second season

1. How does it feel returning for a second season of “Jane The Virgin”?

Gina Rodriguez: “I‟m so excited. I‟m like, I‟m literally and genuinely so freaking excited to get on set and start this next season. I mean, the first season was so much fun and the roller coasters – I can only imagine the kind of awesomeness that Jennie [Snyder Urman] has in store for us.”

2. How do the events of the Season 1 finale set the stage for Season 2?

Gina Rodriguez: “We left Jane in a very beautiful place: very strong, very much so in love with her child, putting herself and her child first knowing that she doesn‟t need to have a man – although she would love a man in her life, she doesn‟t need to have one in order to make this experience beautiful and real and very special to her and that was the experience of having Mateo. And so, we leave her at a very beautiful place. She has yet to know that Mateo is gone.”

3. What challenges will Jane face as a new mother in Season 2?

Gina Rodriguez: “We‟re going into Season 2 and I‟m excited to see Jane‟s strength, you know. I‟m excited to see the strength and a different kind of strength that we‟ve seen. We‟ve seen Jane very strong and very fearless. She sticks up for herself. But this is a territory she doesn‟t know about and motherhood and how she deals with motherhood. How she deals with the fact that her child is, you know, missing in the beginning, it‟s going to be very interesting to see how Jennie [Snyder Urman] writes that. And it‟s going to be wonderful to see how Jane continues to pursue herself as a woman and grow as a woman outside of being a mother and doing those things at once.”

4. More on the challenges of parenthood.

Gina Rodriguez: “We‟re going to explore a really great conversation, which is women and men, you know, both keeping a sense of themselves when they become – when they add on this new title, keeping a sense of their dreams and their determination and maybe it‟s just redirected now or maybe there’s a different purpose now. But I think you‟re going to find Jane to be even stronger, even more willing to take risks because of her motherhood and preserving a sense of self throughout that, which is not easy. You know, I saw it with my own mother, I see with my sisters. Like it‟s not easy to do that. So, it‟s going to be really encouraging and inspiring to play a woman that‟s going to try to figure that out because maybe we can talk about it and figure out answers and maybe that will prepare me for motherhood myself [laughs].” 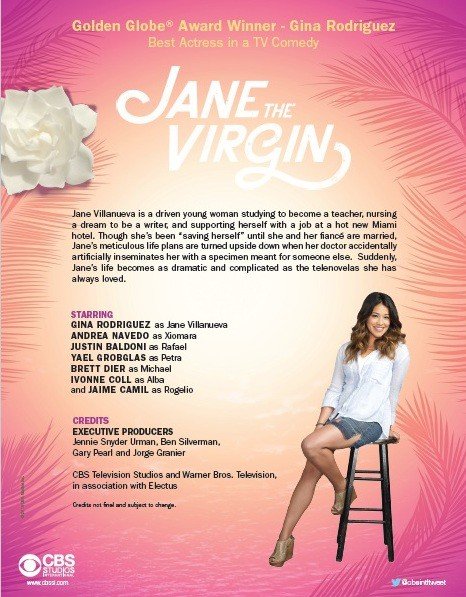 In The CW’s Golden Globe nominated comedy series “Jane The Virgin,” Gina Rodriguez stars as Jane Villanueva, whose meticulous life plans are suddenly turned upside down when she is accidentally artificially inseminated.

Golden Globe winner for Best Actress in a Comedy Series for “Jane The Virgin”, Rodriguez’s profile has been rising steadily since her breakout performance as the titular character in “Filly Brown” at the Sundance Film Festival in 2012. Named the “Next Big Thing” and one of the “Top 35 Latinos Under 35” by The Hollywood Reporter, Rodriguez is also an Imagen award winner for Best Actress in a Feature Film for “Filly Brown.” Gina continues to be noticed by many due to her incredible acting chops, raw talent and addicting personality. The LA Times has even referred to her as “forthright and formidable, a festival ingénue who deserves to be discussed in the same breath as Elizabeth Olsen and Jennifer Lawrence.”

“Jane The Virgin” has also gained recognition and taken home awards from AFI, People’s Choice and the Peabody Awards.

In addition to “Jane,” Rodriguez began shooting “Deepwater Horizon” opposite Mark Wahlberg. The film details the 2010 explosion on the BP rig that resulted in the biggest oil spill in U.S. history.