Home»Reviews»Films This Week»Long Shot [2019] Review: A Redundant Attempt at creating a Self-Aware Comedy
Films This Week/Reviews

A film featuring Charlize Theron as a foxy politician falling in love with a nerdy guy like Seth Rogen really didn’t need much to perk up the overall interest. Even after knowing that the film would follow just the same generic tropes all over again and be just as corny as any other romantic comedy, I was looking forward to it just because of the odd pairing. A weird fantasy perhaps, but I was really interested in what the makers do with their respective skills and style-sets. Sadly, while oversimplifying almost every single shift, ‘Long Shot’ achieves hardly anything more than a generous admirability. Even when both the actors try too hard to push the envelope; most of the shticks fall flat due to the predictability.

As mentioned before, the film is basically about a geeky journalist, Fred Flarsky (played by Seth Rogen), getting in touch with the Secretary of the State, Charlotte Field (Charlize Theron) and the following consequences. The odd couple, as it looks just from their appearances; they aren’t quite forthright about their appeal for one another, until a sudden accident which, quite literally brings them closer. That cringe is perhaps a part of the comic element, which, if taken like that, fits just right with the not-so-believable romantic angle. Much of the romantic developments happen at such gigantic sequences (not literally every time), where the heightened drama can again, be a part of showing how odd it is to see them having a romantic relationship, especially when she’s one of the most influential politicians, so to speak. 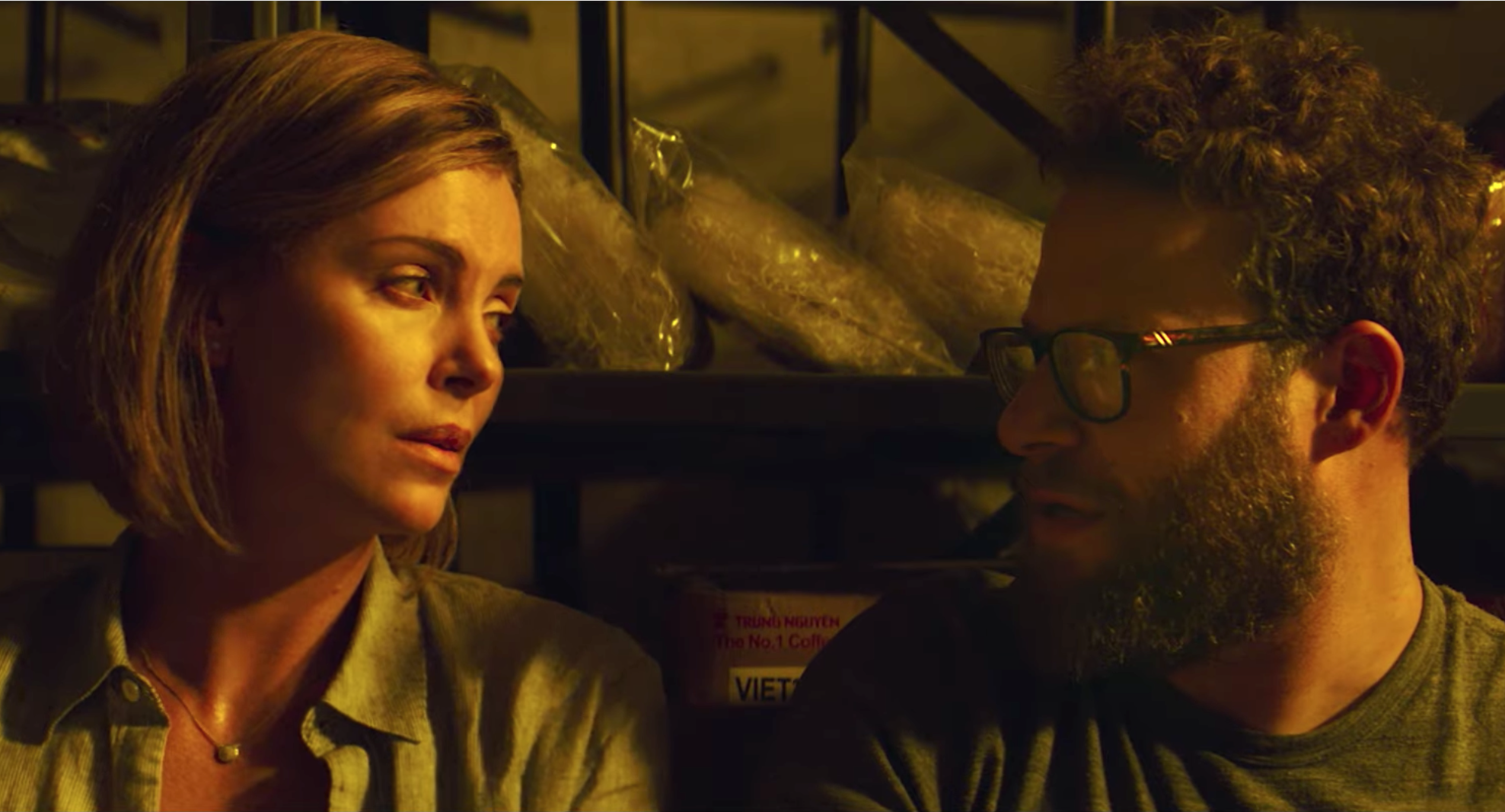 The dynamics between a common person and a politician, the moral boundaries and the compass that we judge one another or believe something at times, all of it is attempted in parts of this script. The admiration for the film pretty much stops there. Because whenever we see some of these details, they are explained beyond a point where it seems forced at times. Like when Rogen’s character realizes how he has been racist to assume that his black friend wears a Cross-chain because of his ethnicity, no matter how on-point the critique may be; it feels too rushed to believe that he has actually realized this. And this has nothing to do with my appetite for a film to dig deeper into the character-dynamics.  But, the existing bits in the film are either severely misplaced or lazily constructed to take any kind of advantage of their acting performances or even the oddness of its central premise.

Irrespective of it all, there are surely a few things to admire here. Theron, after her exceptional shift from Fury Road to Atomic Blonde, brings just as much (if not more) of her own personality to her character. The charm and flexibility she shows, not speaking about the stunts, but between the shifts from the hyper-thrilling moments to the comedic or more dramatic ones, she easily transforms between these and oozes constant energy into the overall film. Rogen, who feels not-so-convincing as her lover, still gets brownie points to use his style of humor to the maximum, which saves some of the moments from seeming completely nonsensical.

And still, there’s a constant plea that the film feels to put forward to make you laugh. It tones down its own ambition with mostly unfunny jokes that probably needed another draft to feel genuine at those places. Even when Theron tries to fit in the tonal shifts, the makers seem to care much lesser about those, which leaves the film largely patchy where the tonal shifts seem more and more unconvincing, despite its weird set-up.

In short, while trying to patch up so many aspects; ‘Long Shot’ is hardly able to embrace its own comedic ambition. It’s even sadder when both the leads are talented enough to pull it off.

TIFF 2019: A Beautiful Day in the Neighborhood Trailer & Images