It takes real courage to sit through the slog like Kaun Banegi Shikharwati. Released on Zee5 this weekend, it is a boring attempt in satirizing the royalness of royalty. Trying to buy into its premise in itself is a big struggle. A royal family is assigned many tasks as if their real life is a squid games replica – that’s what the makers try to make us believe. And it does not match the standards, rather stays miles apart with its poor writing. There are several reasons why it just doesn’t work.

For starters, the original squid games had much more to say, about the current state that we are living in, about the age of capitalism, and about the human tendencies at the bottom of the downfall of our values. And the new Zee5 series does not care to work upon the deconstruction of the myth of royalty, and on the blind belief in having a dynasty besides making a few snarky remarks here and there. There is very little attempt to introduce the depth in its layer of metaphors.

The man at the helm of this palace – Raja Mrutyunjay (played by Naseeruddin Shah) has epiphanies in between about the people going against him in the rebellious spirit. That is due to their anger directed at him because of his continuing ignorance of the affairs of the state that he is supposed to govern. The anti-establishment theme pops up once in a while, without making a comfortable stay in the narrative. Sadly, while having such an interesting topic to introspect upon, the script focuses on the daily soap-styled conflicts between its female characters, who aspire to have the throne of this place. 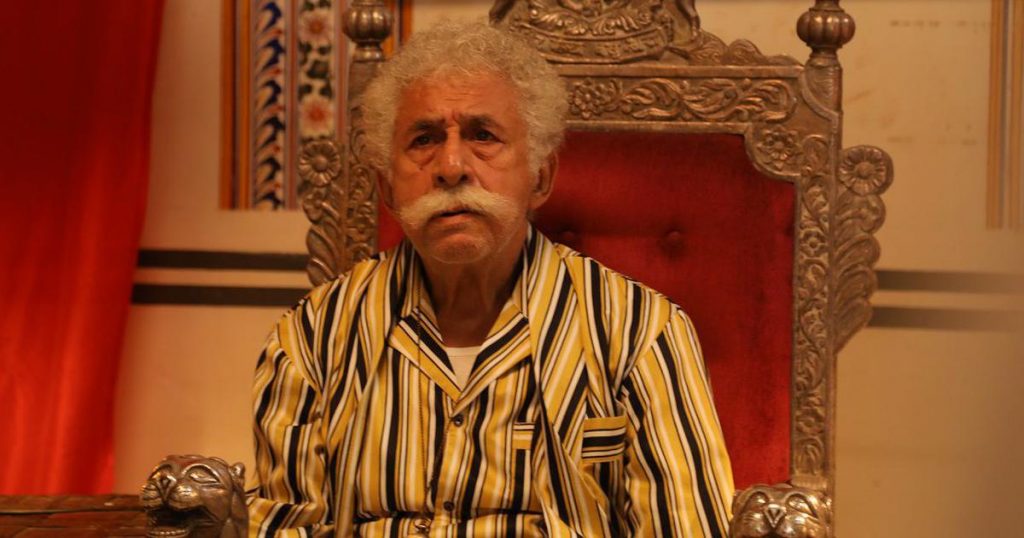 There is rivalry among these – created for the sake of the amusement of the king since they were little, which seems to have only grown over the years. These sisters have spent most of their lives being distant. Their bitterness for one another is because of the coveted prospect of being the heiress of the royal family and gaining all the privileges that come along with it. And their ever-growing hunger is used to introduce conflicts.

While having four different women with their individual set of crisis and personal conflicts, the script does not produce anything nearly compelling to keep the boat afloat. A businesswoman in the danger of going bankrupt, a social media influencer losing her fame, a young coder trying to win over her anxiety, and a saint trying to absolve herself from her past. There are different archetypes that the narrative introduces but then goes on to develop them in a conventional, melodramatic manner without the necessary depth to make any larger point.

And I could understand the intent of the makers behind its bonkers premise. These four women are confined to proving their womanhood based on the age-old ideas of what it means to be a woman. However the series hardly ever makes itself clear whether it wants to critique these expectations or glorify them. In the tug-of-war competitions between the four sisters leading to their coming-of-age narratives, the series does not rise above the basic concepts of growth to indulge in potent subjects at the core. The eventual understanding of togetherness feels hollow and half-hearted due to the weak foundation of writing.

It certainly tests your patience with its whooping sum of ten episodes to make no point whatsoever. There is very little significance to the choices of these characters, the intent, and the outcome, in the grand scheme of things. The comedic style feels outdated to be still being used in 2022. How long are we going to focus on the language barriers between English and Hindi? The humour just keeps getting increasingly boring which uncomfortably fuses with the overdone dramatics. It is not a skill to use the half-baked parts of the writing stage and then to pepper it with unnecessary melodrama. The creators might have made the same mistake.

The impeccable actors like Naseeruddin Shah and Raghubir Yadav are skilful in selling what they have been dealt with and as reliable as ever. The reason I could keep watching it was the tussle between these two actors with their comedic timings. While ‘Kaun Banegi Shikharwati’ also has those who can shine with their acting talent – including all the actresses playing the sisters – especially Soha Ali Khan, most of their performances become redundant to leave any lasting impact. The worst part is seeing the amount of talent wasted on a project that has such a weak foundation. The journey from being a dysfunctional family to a functional one has nothing to present but a set of cliches.

Cubicles (Season 2) Review: Glimpse of Life Within Workspaces with no hint of Drama