When the two-time Oscar winner Asghar Farhadi comes out with a new film, it is bound to stir a storm in the cinephile fraternity. Brimming with a first-rate ensemble of actors, A Hero (2021) is not only as anxious and swift as a world-class thriller but also has the depth and experiential acuity of an ‘Actuality’ film. Dotted with Farhadi’s quintessential ways of capturing Iranian commoners’ at their simplest, ‘A Hero’ is an emotional roller-coaster weaved with a layered screenplay and gentry of characters caught in a web of moral compassing. What began as an unthreatening tale of an act of kindness, swiftly turns into a series of mishaps for the gnomic ‘hero’ that eventually jeopardizes his entire life.

Rahim Soltani (Amir Jadidi) is serving his time in debtors’ prison for three years as he owes his creditor Bahram (Mohsin Tanabandeh) 150,000 Tomaans. When out on a 2-days leave, he decides to sell 17 gold coins to redeem a part of his debt, which were luckily found by his girlfriend Farkhondeh at a bus stop (Sahar Goldust). This could also mean his freedom from the prison if his debtor agreed to take back the case with a partial payback, and a bond for the balance amount. However, the gold coins didn’t amount to enough money value. Either because of a lack of thereof or springing righteousness from within or from a berating session by his sister Malileh (Maryam Shahdaei), Rahim decides to return the gold to its rightful owner. Pretty simple, right? Not really, cause just when you think things are falling into place for Rahim, all hell breaks loose.

Related to A Hero (2021): Every Asghar Farhadi Film Ranked

The return of the gold coins stirs a whirlpool in the prison, as the dignitaries applaud Rahim and his act of kindness. A media interview follows, which immediately crowns Rahim as ‘A Hero’ for his honesty. The noble act quickly spreads like wildfire, like warm butter on a hot toast, like a viral tweet- garnering Rahim immense social media attention. A charity function is organized, donations for Rahim flow in, with considerable pressure on Bahram to take back his complaint and give Rahim a chance. However, Bahram is not moved, he insists time and again that there is more to the case that the eye can see and that Rahim may not be the simple pawn that he is portraying himself to be. On the other hand, there is also significant buzz among the cellmates that the news was just a political move by the officials to divert the suicide of a prisoner.

Things eventually get sinister when the council official, who was to give Rahim a job, post his liberation from prison, gets involved. He questions the case and also those who were involved in it. Rahim was summoned along with his sister (who returned the money) his son (who was the eye-witness) and also the rightful owner of the gold coins (who was apparently returned the coins). As it turns out, Rahim cannot trace the rightful owner of the coins, he takes a step that plagues the entire trajectory of his life with mishaps. You find yourself sinking in the seat as and when Rahim acts on being questioned for the credibility of his act. Yet another unassuming narrative trope by Farhadi, the incident is a masterful depiction of how a simple situation can spiral out of control based on a singular decision. Hereon, you are left wondering if you should root for the ill-fated Rahim or condemn his deleterious decisions. 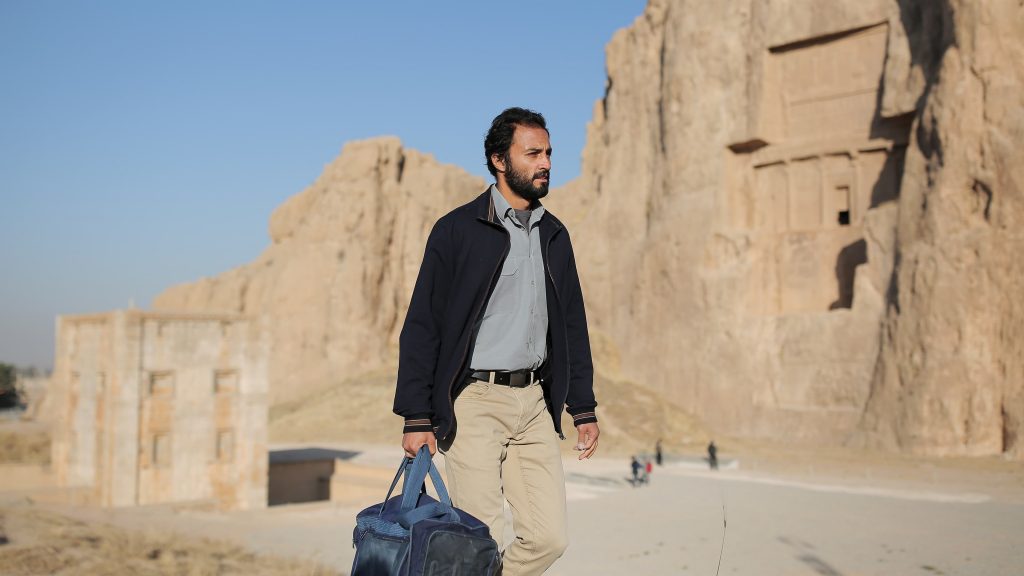 The beauty of A Hero (2021) lies in the demure way Farhadi tells his story- he is definitely not trying to assuage the character of Rahim. He lets Rahim’s actions decide for himself. So when you see Rahim returning the coins, you feel moved for his cause. At the same time, when you see Rahim attack Bahram in front of his daughter in a confined, claustrophobic space, you feel enraged at him for his misdemeanor. And so while you are constantly weighing the character of Rahim as ‘good’ or ‘bad’, you gradually realize the ‘gray’ that the filmmaker has been trying to tell you throughout. The more you watch Rahim on screen, the more you are torn between his skeptical behavior- is he just a hangdog or a dishonest mastermind. Is he really just a victim of the circumstance or did he plan the act for the social media attention that unfortunately went haywire? The questions keep coming as the film progresses.

Despite Rahim’s cringe deets of pawning his stuttering son in front of the audiences to evoke empathy, and losing his restraint in front of Bahram, Farhadi sucks his viewers into rooting for a man who is caught in a gyre of moral ambiguity. The message even comes in the film when Mr. Taheri (the police personnel) addresses Rahim as, “You are either really simple or really clever”. So the viewers, much like the protagonist, are stuck in the ambiguity of whether he was doing the right things for the wrong reasons or he was doing the wrong things for the right reasons. However, regardless of this judgment, Farhadi elicits the viewers into wanting freedom for Rahim even if that meant compromising on the legal system.

Also Read: Everybody Knows (2018): A Rare Misfire from Asghar Farhadi

Amidst the drama encompassing the moralities, the film also highlights how the emergence of social media has further convoluted the parameters of justice. It is capable of giving instant gratification, but at the same time, it can also tear you down immediately and strip you of your self-worth. Social media love is exhilarating but social media hate? That can be twice as daunting. If it can make you ‘A Hero’, it can also jeopardize your honor. Exactly what happened with Rahim when Nazanin released his video. But again, the effect of the blow could be softened by the charity announcement, thus, verifying our argument.

In all, the film constantly tests your frustration and anticipation and makes you question how a singular act of ‘good’ deed could vehemently be induced by an ambivalent intent of greed or adulation. But again, that is not what the filmmaker is aiming for, he never judges his characters or is biased towards the situations he puts them in. And that is what makes A Hero (2021) a delightful watch despite its heart-rending climax. Constantly shifting genres, it is a strong moral drama and a devastating portrait of a man who gets caught up in a dubious whirl of motives, needs, ingenuity, and a ‘good’ deed.

A Hero is currently streaming on Prime Video US now.

If A Hero (2021) isn’t available for streaming in your area, watch it by using ExpressVPN. It’s fast, secure, and unblocks Prime Video, Netflix, HBO Max, and pretty much any other streaming platform. Here are some exciting deals for you.

Emergency [2022]: 'Sundance' Review - An Intense, first-hand look at the black-experience