In 2020, something as basic as constitutional equality might not seem radical to most of us. However, in 1971, the year where the FX series Mrs. America picks up, this was the big national debate. We meet Phyllis Schlafly (Cate Blanchett), mother of six, an expert on nuclear policy & unsuccessful Congress candidate. Her husband, Fred (John Slattery) is an Illinois lawyer, who “lets” Phyllis do all these activities & run for Congress as long as she loses. She’s fierce, formidable & a natural leader. While she doesn’t pay heed to the soon to be ratified Equal Rights Amendment (E.R.A), it’s her friend Alice (Sarah Paulson) who draws her attention to how this bill might marginalize housewives & much worse, draft women, into the military. This is when she shifts her energies from fighting communism to fighting feminism. The E.R.A however, is but part of a larger plan to advance her conservative agenda.

Mrs. America is the tale of a revolution, with a counter-revolutionary as its protagonist. While Phyllis is at the center of the story, there’s also the other side – women fighting for the E.R.A. This group consists of the most powerful names in the women’s movement of American history – Bella Abzug (Margo Martindale), Gloria Steinem (Rose Byrne), Betty Freidan (Tracy Ulman), Shirley Chisholm (Uzo Aduba), Brenda Feigen (Ari Graynor) and Jill Ruckelshaus (Elizabeth Banks) among others. What’s interesting is how this group is also not a homogenous set. Betty (the author of The Feminine Mystique), who feels like a has-been, has her doubts about the current phase of the revolution. She’s vocally opposed to lesbian rights & this causes tension about what should & shouldn’t be a part of their movement. Some like Bella choose to be pragmatic while others like Gloria want to do right by all women & believe the movement can be an umbrella for all women’s issues – abortion, sexual preferences, constitutional equality, and many others. And then, there are also socially liberal Republican voices like Jill trying to find their space in the largely Democrat-leaning group.

Related to Mrs. America – The 26 Best Hotstar TV Shows That Are Worth Your Time

What struck me as the sharpest observation of the series was what Bella Abzug says about Phyllis being “a goddamn feminist and perhaps the most liberated woman in America” herself. Turns out it’s true – Phyllis goes to law school at 50, much against her lawyer husband’s wish; mobilizes a force of housewives against ERA; has political ambitions & is highly opinionated. It’s not very surprising then, that most of her loyal followers, who feel threatened of being robbed of their homemaker “privilege”, find purpose outside of their homes – in this fight against the ratification. 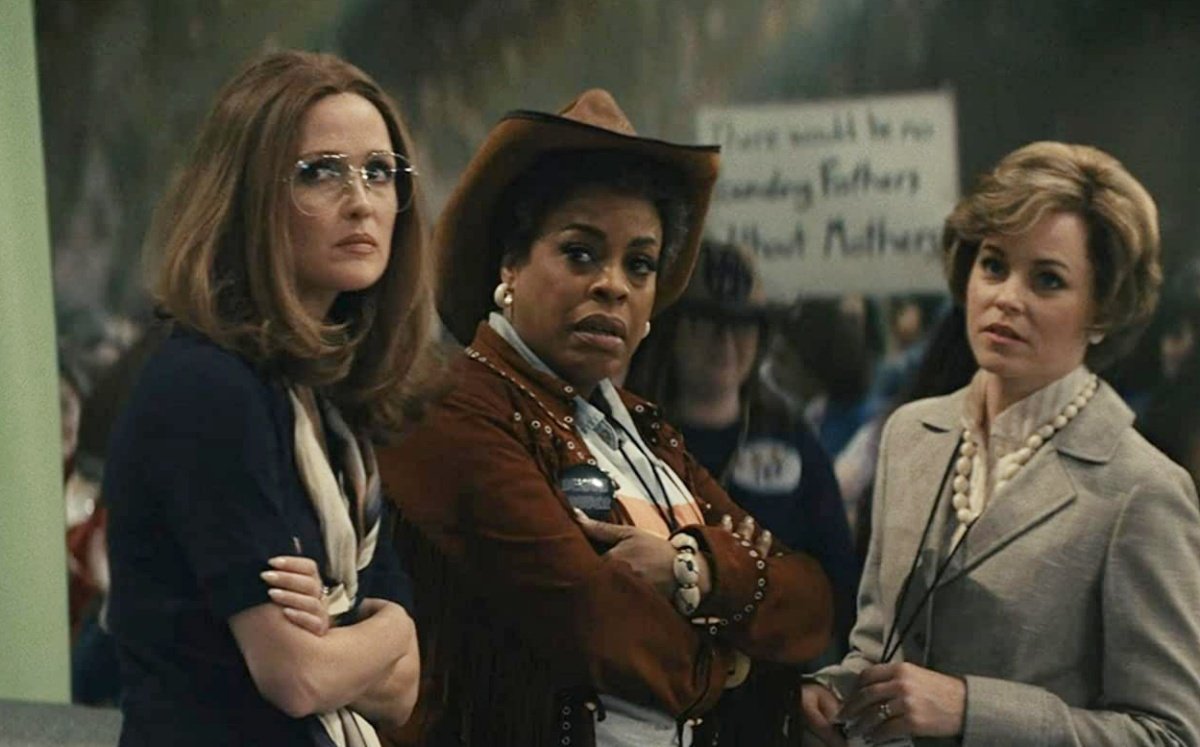 The fight, that changed the course of American history, does get ugly. The conservatives led by Phyllis resort to far-fetched theories, fake news (yes it isn’t exclusive to our times), throwing slurs at feminists- ‘commie radical man-hating depressed lesbians’ & aligning with racist & religious groups. Throughout the course, Phyllis appears to be more & more like the ancestor of an alt-right troll on Twitter. The feminists, on the other hand, do their best to deal with the filth & varying ideologies in their own brethren. For instance, there are problematic people (predatory Democrat men with serious allegations), but crucial to getting the ratification.

For those not well versed with American history like myself, the show does get a little confusing owing to the sheer number of characters involved. In the larger scheme of things, however, the progress of the movement & the subsequent counter; demonstrations, televised debates, marathons, protests, lobbying & national conventions are all staged meticulously. In that sense, Mrs. America is in the league of The People vs O.J. Simpson: American Crime Story (also featuring Sarah Paulson) – both being the re-telling of divisive national debates, and women taking the lead in their quest for justice.

A powerful tale like this only needs an equally powerful cast to create a masterpiece. And Mrs. America with the names it has to brag is an out & out winner in this department. Cate Blanchett as Schlafly is cunning, conspiring, but also a firm believer in her cause. She practically disappears into playing Schlafly & gives us a character we love to hate. Others including Byrne, Martindale, Graynor, Banks & Ulman are all as determined as the real-life women they portray. Special mention for Uzo Aduba as Chisholm, a performance that got her a well-deserved Emmy this year. And then there’s Sarah Paulson’s Alice, who serves as the voice of reason – initially Phyllis’ devout friend & follower, she later starts questioning all that she stands for. It’s a satisfactory character arc & Paulson is terrific as always.

Related To Mrs America: 10 Great Films On Hotstar That You Can Stream Right Now

As the end credits rolled and I saw the eventual fate of the E.R.A, mixed with real-life footage of the women who fought for & against it; I wondered about the time it takes between sowing seeds of change to actually seeing them bear fruit – it’s ridiculously long. The E.R.A was first drafted in 1923. 97 years later, the fight for equality still continues. Revolution, as they say, is not a bed of roses. It’s a struggle between the past & the future.