Hirokazu Koreeda has built his career as a director over the last two decades through thirteen feature-length family dramas in Japanese, collaborating with his regional actors, often unknown to Western audiences. After “Shoplifters“, his film that won the Palm d’Or for Best Picture last year, Koreeda has made a bold move, and his latest film, The Truth (2019), which received the honour of opening the 76th edition of the Venice Film Festival, shattered almost everything that we knew by now about this Japanese director.

I say almost everything, because apart from the French-English language, big-name actors such as Ethan Hawke, Juliette Binoche and Catherine Deneuve, and high-budget production, one thing has remained the same, the Japanese author still has an obsession with unusual family relationships.

True Mother, her daughter and a book of lies …

The film follows Fabienne, a French film star at a career setback who decides to publish an autobiography entitled “The Truth.” For that occasion, her screenwriter daughter Lumir returns from New York, back home to Paris with her husband Hank, an actor in low-budget series and daughter Charlotte.

Reading her mother’s book, Lumir reveals that a lot of details in “The Truth (La vérité)” are left out, or reshaped, from the insane false details of her childhood, over the death of her rather lively father, Pierre, to the neglect of Fabienne’s best friend and talented fellow actress Sarah. The fine line between the cruel truth and stellar lies is further lost when the old actress gets a role in the film “Memories of My Mother, “along with a younger colleague, Manon, whom everyone perceives as “the next Sarah.” 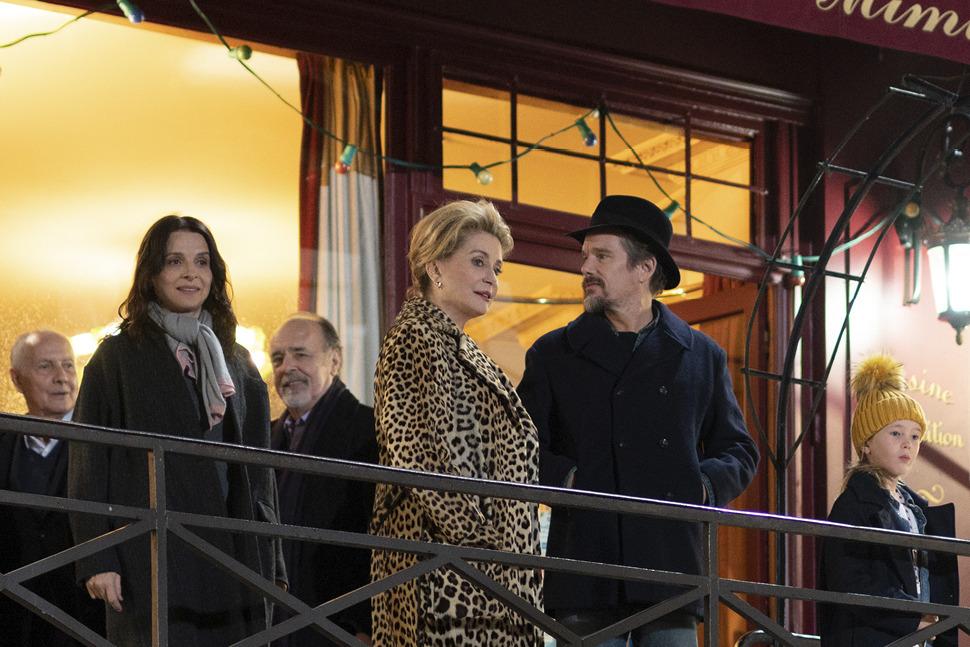 False mothers and daughters and true journeys through time

Although “The Truth” may at first seem like a straightforward, simple and average drama, the film is much more complex, essentially being an emotionally-driven mystery of high-class lives. All characters, from the butler and the cook, through Manon and Hank to Lumir and Fabienne, carry a piece of the puzzle of the “absolute truth” with them, a deep passionate tragedy waiting to be revealed.

Thus, in the opening moments of the film, director Koreeda convinces us of the false grace and brilliance of Fabienne and her seemingly harmonious and carefree family. However, as the film progresses, so do its characters, with their innocent, almost daily actions, showing us what is being kept silent in order to maintain the reputation and glory presented to the world.

Some of the film’s most memorable moments are depicting the release of truth through meta-cinematic spatiality. In the moments of the filming of “Memories of My Mother”, the characters of “The Truth” finally become themselves, discovering who they really are and who those around them are, only to rehide their lies at the end of shooting. An especially fun moment on the film when this happens is when playful (grand)daughter Charlotte pretends to be a great Hollywood actress.

The core of the film lies in the very relationship between Fabienne and Lumir. The mother-daughter relationship, different temperaments and life circumstances manage to intrigue at every moment. It is a serious yet entertaining duo and it is best demonstrated by the director’s commitment to embedding the protagonists in their careers.

Lumir is more of a screenwriter than a daughter, and for her, Fabienne becomes just another insane, stubborn actress for whom she needs to formulate a believable text. Fabienne, on the other hand, is keenly aware of her age and her status in the film industry, which is declining day by day, and she actually accepts wearing a “star mask” in front of her loved ones. The layering of true and false emotions and memories is constantly changing in the film while building up a dramatic tension just as much as a comic detachment.

“The Truth” can be repetitive at times, as Koreeda revisits the same locations and presents the same problems and ideas. Although this works in a great way to shape the layers of fiction and reality on film, on several occasions, it may seem repetitive (especially to an audience accustomed to films by European and American directors).

Still, it’s a minor complaint, and ‘The Truth (2019)’ is thoughtful and detailed in its screenplay, also presenting us with some of the best acting performances in the careers of Catherine Deneuve and Juliette Binoche. When it comes to the bright and playful directing of Koreeda who is not afraid to experiment, it is safe to say that this is one of the most significant films that we will remember from 2019.