The two recent It movies are terrible, failing in both the horror and coming of age genres. They are not scary, they don’t use the horror genre to expound on the horrors of real life in an interesting manner, and even the relationship between the characters is barely admirable.

With the horror in this series, anything goes. Such fantastical scenarios and monster iterations will appear and disappear, usually when the characters go snooping for this evil itself, and there’s no consistency or guidelines to ground it. Other horror films with supernatural elements usually have a clear basis – in the Nightmare on Elm Street series, you can only be attacked in a dream. With this It movies, the monster is meant to be a kind of hallucination that only the central cast can see and isn’t really real (until it is).

Sometimes the destruction and pain the monster inflicts is only in the heads of these characters, yet other times it’s real, which is a common trope in horror films, and it makes sense that this kind of horror fantasy will eventually (and for what should be a clear reason) start to have a real-world effect. These spooky horror moments are often a red herring – the monster just scares these characters, but they just simply run away or ‘wake up’ from the horror, but in this series there’s no discernible reason for when the monster starts to have a real-world impact, it seems only when the film randomly demands it, and these It films overdo this trick – almost as many times as it overdoes its lame jump-scares.

The equation for anticipating the jump-scares is easy in these films: someone’s looking around a dark and dingy area, accompanied by some spooky atmospheric music, then as they look into a particularly shadowy area, the music comes to a silence, which lasts a few seconds, then BOO! jump-scare emerges, accompanied by non-diegetic clank sound. This occurs approximately seventy-four times across these two films, so you’ll probably be desensitised to it after not a long time. 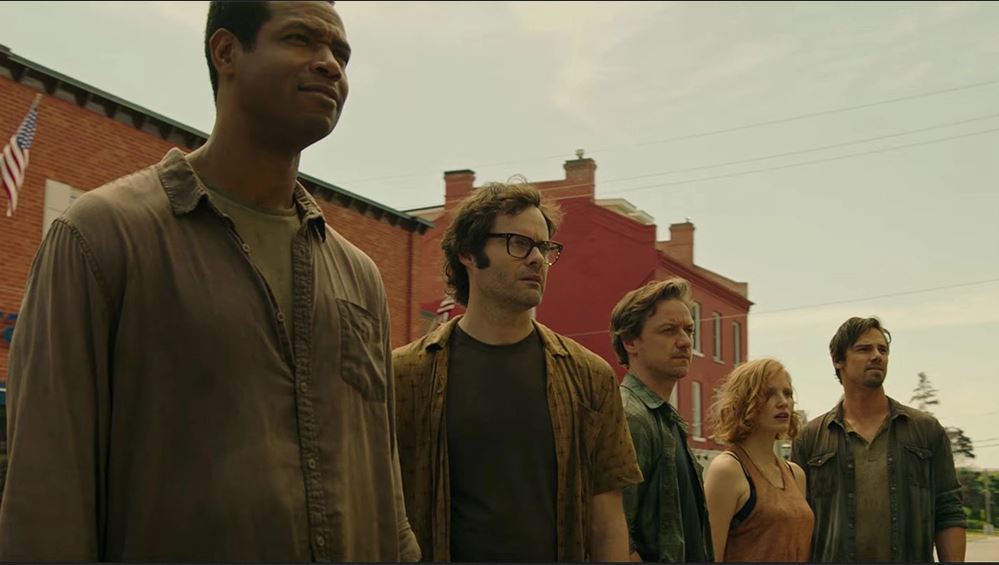 There’s not much else to the film’s horror. There’s no mood-building or dark psychological insight or a general unsettling feeling, it’s a pure haunted house ride, that lasts a total of five hours. And the clown villain at the centre of both films is played by Bill Skarsgård with no nuance or intellect, just with a lot of overly-performative wackiness. To see a performance like this at a Halloween party would be relatively amusing, but across these two overlong films, it’s too exaggerated to be scary, yet not goofy enough to be funny.

Director Andy Muscietto has zero understanding of the horror genre. He can’t comprehend how to use it to tap into our primal fears, or even how pace the scares, or even just pull off an effective jump-scare. These horror films of his are hollow and ineffective, as he can only use surface-level spooks and frights as his main and only modus operandi.

Related to It Movies: It Chapter 2 Trailer Review

It Chapter Two has clear wink-nudge references to Psycho, The Thing, and The Shining, but its brand of horror (and storytelling and filmmaking in general) is the antithesis of those films. They’re auteur works that manage to convey a simple story with a unique directorial style that can be so unusual, it’s what gives them their sophisticatedly unnerving mood. Both It films, conversely, have nothing original to contribute to the genre, and will never enter the pantheon of great horror films like the aforementioned, despite their success commercial and (to an extent) success with audiences.

To these films’ credit, they are least try with the characters. There’s nothing particularly outstanding or original that hasn’t been seen in a whole bunch of other coming of age tales, but there’s more of a focus on the characters’ interactions than on the horror (though by focus, I’m not talking about screen-time). Their chemistry is clearly stronger in the first film, as they spend so much time apart in the second film, that even when they come together to face their demons, they don’t feel so reconciled.

And I guess what the monster in the It movies is representing is quite clearly fear itself, like that of childhood trauma, which sticks to these characters as they grow old and must face them in the sequel. It’s a decent enough theme, despite that the monster they are contending with the most is the clown, even though there’s no real reason a clown should be the main avatar of their fears – none of the characters have a deep-seeded fear of clowns (if one of the kids was a child of John Wayne Gacy, this would be a different story), so a clown playing the epitome of fear merely comes across as goofy within this context.

These films at least sort of try, and they’re based on some meaty work by Stephen King that could’ve been abbreviated down to its essence – children growing into adults as they fight against the evil of their childhood town. But the novel isn’t perfect, and the films don’t make the themes any clearer or more horrific. They represent your typical popcorn horror blockbuster entertainment, which is horrendously contradictory – great horror rarely relies on the aesthetics of tent-pole films, like the loud, obvious, rushed (yet relentlessly never-ending) mood a “horror” film like these set. They do have the carnival-esque kind of horror that evokes some gross and gruey delights at times, but it’s not substantive enough to fill out the ridiculous run-times these films aim for.

6 Movies About Teachers, Outside The Classroom

The Scarecrows (Les épouvantails) [2019]: 'Venice' Review- The Horrors of Survival