Pygmalion and Galatea at Marienbad. Meaning of art in Alain Resnais’s “Last year at Marienbad”

The 1960s were a very special time in the history of cinema. During this decade, especially in France, directors did not hesitate to break all the rules and filmic conventions known before. The French New Wave was strongly against cinema in the shape as it used to be and focused on giving the voice to auteurs, and not producers or studio executives. As a result, Nouvelle Vague films usually were highly introspective and personal. Nevertheless, simple stories did not mean a simple form. A French New Wave filmmaker – Alain Resnais was very passionate about the style of his works. One of his most visually mesmerizing films is Last year at Marienbad from 1961.

This enigmatic masterpiece is a story of a man in a strange and isolated chateau who becomes acquainted with a woman and insists on them having met before. The two main characters are played by Giorgio Albertazzi and Delphine Seyrig.  The plot of the film is not relevant, in fact, it is not a regular plot, just a story about a story. If it is not the plot, then what makes Last year at Marienbad such an exquisite piece of filmmaking? The style of Alain Resnais’s film is hauntingly beautiful and one of its kind. The multilayer form gives plenty of possibilities for interpretation. 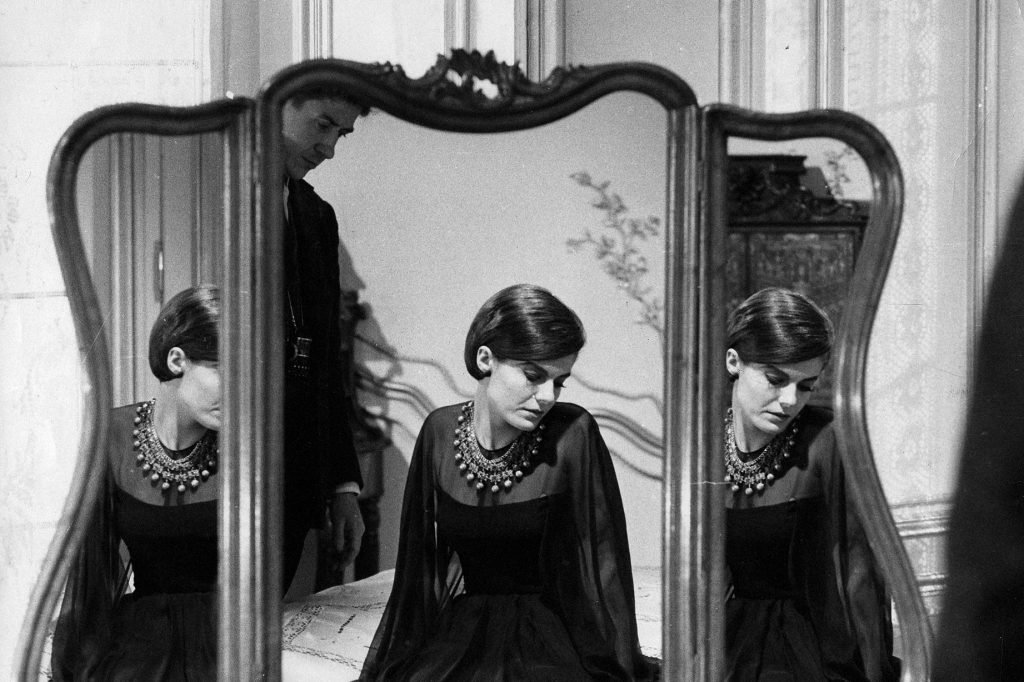 The opening sequence of Last year at Marienbad can confuse a first-time watcher. The film starts just like a documentary on rococo palaces. What is more important, is the fact that for about three minutes we do not see any of the characters. The off-screen narration of the main protagonist lists panelling, stucco, decorative cornices, carved door frames and says that he feels himself while surrounded by all these ornaments. We are about to realize that all the other characters also feel good in this stiff and sophisticated interior.

Alain Resnais in his opening sequence suggests that the palace and artworks are more important than human characters. None of them has names and they are referred to just as The Lady or The Brunette. They do not push the action forward, solely fill the grand halls and balance the composition of beautiful shots by Sacha Vierny. This occurs just as if the characters were merely the ornaments, and the ornaments were the characters. Also, all of the female actors wear very decorative jewellery and dresses designed by Coco Chanel herself. Rich costumes hide minimalistic characters.

This suggests that the actors are just ornaments and have a substantiation in the fact that they very often resemble sculptures. A characteristic of sculptures is that they tell stories through unfinished gestures and show the frozen climax of the action. This intention of not telling the story till the very end is represented also in the construction of the dramaturgy of Last year at Marienbad. Its narrative is withheld and repetitive as the main character constantly tells the female character one story all over again every time they meet. The film’s action is frozen in its culmination and shown from various sides. This is a clear association with sculptures that can be admired from different points of view and angles.

The fragmentary and circular narrative is a medium of deconstructing filmic convention. Through the form of his work, Alain Resnais poses a question about what is necessary for a work of art to become a film. Roger Ebert, an American critic, once wrote that it is all about what is between the cuts. This means that there are not any precise guidelines and it is rather about the feeling than rational evidence. However, the reason for choosing such a particular style for Last year at Marienbad is very rational. What is a better way of telling about ephemeral memories and elusive emotions than through dream-like, oneiric sequences?

Using actors as sculptures, besides previously discussed reasons, is also justified because of the statues’ role in the plot of the film. The mysterious couple supposedly met next to a sculpture presenting a royal couple in ancient togas. The Narrator says that here antiquity is just a convention of representation. In the case of Last year at Marienbad, the film is a convention by which an ancient story is told. Numerous interpretations of Resnais’s masterpiece draw attention to mythological motifs. Scholars often mentioned similarities between the film’s leads and Orpheus and Eurydice. However, I believe that the most important link between Marienbad and ancient Greece is the myth of Pygmalion. Pygmalion was a legendary king of Cyprus who falls in love with a statue he has carved. The goddess of love – Aphrodite hears the poor man’s prayers and enlivens his masterpiece – Galatea.

The Pygmalion effect is a self-fulfilling prophecy that is based on satisfying positive expectations towards someone because of a positive expectation we have created. The main character of Last year at Marienbad still awaits his fulfilment. Resnais’s Galatea is independent and doesn’t follow the training so easily. The character from Last year at Marienbad suffers from the Pygmalion complex. He tries to have an influence on his lover but she rebels against him. The protagonist of the film has created his own vision of the leading female character and struggles to realize that reality cannot live up to his expectations.

Comparing the female lead of Last year at Marienbad with Galatea has also substantiation in the dialogues. The male character tells her that she looks as if she was alive and also that all the eyes were created in order to look and admire her. After all, aesthetic pleasure is all about the senses, especially sight and vision. This proves that Delphine Seyrig’s character is strictly decorative and trophy-like. Her admirer never mentions anything about her values of character or abilities. He is interested only in the alluring façade. When he mentions their last year’s fierce romance he longs to experience it again.

Apart from sculpture-like actors, there is another attractive means of expression in Resnais’s film. It is the usage of mirrors and reflections, which is a characteristic feature. The cinematographer Sacha Vierny, very often, composes shots that imitate reflections or actually have mirrors in the frame. This makes the image look very pictorial. Diego Velazques often uses mirrors to add another level of storytelling in his paintings. Sacha Vierny does the same to enhance the feeling of the claustrophobic rococo hotel and haunting memories one cannot escape. There are a few moments in the film when the images give reference to Maurits Cornelis Escher, for example, scenes with mathematical graphics of the maze-like garden.

While discussing art that influenced Last year at Marienbad it is also obligatory to mention art that was influenced by this film. In 2011 Karl Lagerfeld took inspiration from Last year at Marienbad while designing his spring-summer haute couture collection for Chanel. His exclusive custom-fitted clothing is a visible sign of the film’s modern importance in broadly understood culture. It is also interesting to mention that nowadays Last year at Marienbad is treated as Chanel’s legacy. During the Venice Film Festival in 2018, a special screening of Resnais’s work was held. It was organized by Chanel – the company which also supported the restoration of the film in 4k using the well-preserved original negatives from 1960. This event was more important for the fashion world which focused on the artist of Coco Chanel designed costumes than the artistry of Alain Resnais or Sacha Vierny. For this particular audience art, on-screen was understood as dresses displayed on the screen.

Another modern piece that shows an undying fascination with Last year at Marienbad is a video clip for Blur’s song To The End. It literally quotes many shots from Alain Resnais and uses the same kind of fragmentary and repetitive editing. However loyal to the original it tries to be, it fails in creating such a mesmerizing vision. A brit-pop song certainly does not improve the final effect. Perhaps Roger Ebert’s explanation could be used here once again – it is all about what is between the cuts.