In Jean Pierre Melville’s carefully constructed neo-noir world of “Le Samourai“, every male character wears a raincoat covering their entire two-piece vest and irrespective of the weather – a grey hat. They prefer to smoke instead of making a conversation. A very American-ized inspiration to be sure, with Melville focusing very much on style over substance, but the underlying genius of Melville and Le Samourai is its focus on the incidentals.

From the opening 2-minute long static shot where we see Alain Delon’s unnamed protagonist lying on the bed smoking and blowing rings towards the ceiling until the clock strikes, and he gets up, and with measured movements almost resembling muscle memory, he gets dressed in the attire described above and then locking his apartment goes downstairs. Standing on the footpath, he waits for a car to park, the driver disembarking from the car and walking away. Surreptitiously glancing, our protagonist slowly enters the car, takes out a bunch of keys, and puts it on the seat beside him. He then takes each key and tries on the ignition of the car, a time-consuming job for sure, but Melville makes sure to show us Delon’s non-expressive face. He is cool, and most importantly, he has done this before.

Le Samourai is a movie about professionalism, and about details. Delon’s protagonist Jef Costelo, is a professional who focuses on the details of his alibi, from the time he is supposed to have left his girlfriend’s house, to the time he is supposed to have been at a card game, while in reality, he was assassinating the owner of a night club called Martey’s. 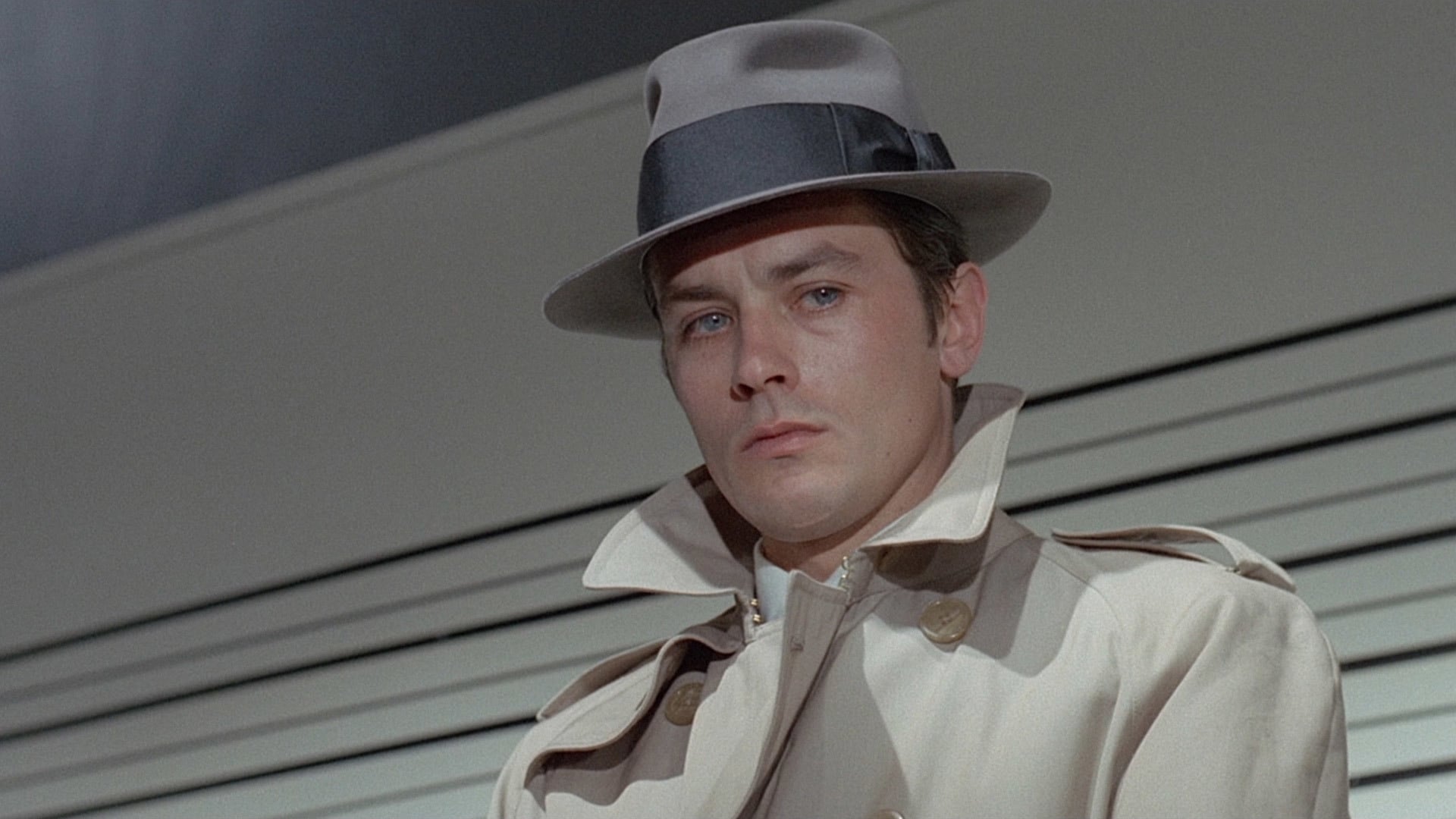 Delon’s Costello is efficient and comfortable in a pattern, so when the pattern breaks his life slowly unravels. From being unwittingly discovered on the scene of the crime by the pianist of the jazz quartet in the nightclub, to being arrested by the police and being questioned – these aren’t events he had thought through, but like any professional, Costelo wades through, answering each question by the dogged inspector who suspects him but doesn’t know how to prove it. The downfall again happens when the pattern breaks, because this anomaly gives rise to curiosity, both on the part of Costello as well as his potential employers.

There is an argument to be made that for such a pulpy premise, the movie is too solemn, but that again speaks to the reality established in this movie. From our protagonist, a silent assassin, to our antagonists, everyone is extremely capable and trying to outmaneuver each other, and the only way this dance even breaks is when the usual pattern falls through – this hyper-realism ultimately helps to elevate a pulpy fare to something feeling a bit more cerebral, even though the overarching plot is simplistic and light on details.

Also, Read – How The Face of Another Finds Its Right Audience in 2019

But Le Samourai is a director’s movie. Melville knows exactly how to frame a shot, and to manipulate viewers into not realizing that they are in the same house Costello was conversing in two scenes before. It is impossible to understand until Melville wants you to realize. It is also different as Melville opts to not use too much background score – the resulting silence or the sound mix feels unsettling. The sequence of the room being bugged and the counterpoint of the bug being discovered is a masterclass in sound mix and editing. And for a character of few words, Delon gives Costello more depth in the physical acting than words are actually required. He is the perfect protagonist in this stylized neo-noir world, where it is impossible to survive unless your proficiency is absolute, and even then contingency plans fail.

There are even hints of a commentary into the upper echelons of French society, a conversation between the inspector and Costello’s girlfriend brings to light the openness and yet the casual sexism of that society. It is not stressed but looking at how Melville structures this movie, this scene was required there, which is fascinating.

The White Fortress [2021]: 'Berlinale' Review - An Entertaining Love Story with a Horrifying Core