Rarely, you find adaptations that do justice to the author’s vision. The Face of Another (1966) is one such exception because the director Hiroshi Teshigahara is an auteur. The world he creates in his films takes the viewer into the protagonists’ lives and makes you experience their discomfort. The unease the viewer feels is similar to being in Kafka’s world. Kafka fans will appreciate this film.

I have watched foreign films with subtitles and only in watching this I realised how important body language and the tone of voice is when assimilating an experience in a different language. Here the acting is so phenomenal that it seemed real, authentic without the crutches of subtitles to make me feel for the characters and participate in the unfolding events.

Related to The Face of Another (1966): 10 Best Films About Facial Surgery

The Face of Another (1966) discusses identity and it is evident from the protagonist’s thought provoking dialogues. He is unable to recognise himself anymore after an accident has disfigured his face. The opening scene shows prosthetic body parts suspended in a liquid and we get to hear the voice of a psychiatrist. This scene immediately establishes a theme- the connection between mind and body. It sets the mood for the entire movie. When the protagonist blames himself for the accident saying it might have been his overconfidence in his technical knowledge that caused this.

Again, you are reminded of the intimate connection between mind and body. We see how fascinated the psychiatrist is with the way in which people perceive themselves with a difference in looks, what it does to their self-esteem etc. Our protagonist becomes his guinea pig and he is able to live out his fantasy and this appears to be a win-win situation for the protagonist at first. He gets another chance at life, or does he? The over-enthusiasm of the psychiatrist reminds us of Frankenstein.

We are never shown how the protagonist looked before the accident. We only get to know that his life had been stable- a stable job, a stable marriage. In the scene that shows the protagonist’s domestic life, we see his bandaged face facing the camera and his back facing his wife, the most important person in his life. The camera focuses closely on his wife’s features- she has painted nails, made-up eyes and lips. We are not told anything. We are only shown this. The camera does the talking. She is attractive and prefers to keep appearances, we understand. She is polishing her gem. And all this happens behind our protagonist. As if the world is going in, moving on behind him. 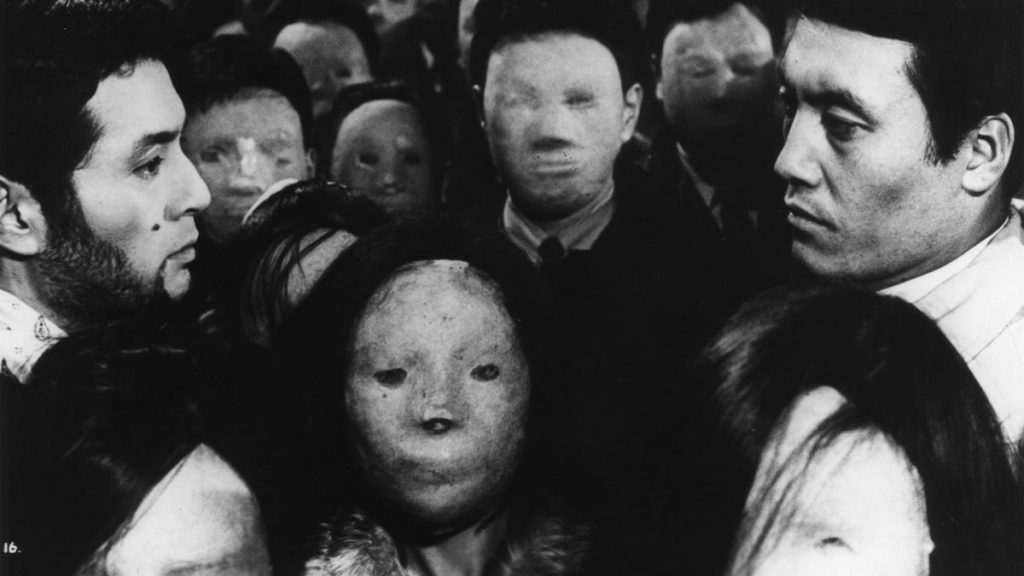 I have been following photography and artwork of people’s back profiles and I wonder what is so captivating about it? Mystery? Shyness? Insecurity? It challenges the viewer, who am I looking at? You wonder. Who is this person? It reminds me of scenes from movies when a person mistakes a stranger for someone they know very well because of the way they look from behind. It isn’t reliable. It plays tricks on our senses. It shows vulnerability. Like when you have no control when someone talks or does things behind your back.

In the scene, when his wife stops doing what she loves i.e. polishing her gem, only when he interrupts her, we get to see how he is hindering her progress, her routine. When his wife does not sit directly opposite him, when she evades his face, but still makes conversation, and fidgets with the radio it made me think of how we converse in 2019. Behind screens.

Even in person, we are so used to looking at our screens that we are constantly distracted by notifications, not giving our full attention to the person with us. Screens are used to evade awkward conversations, they are used to supplement conversations- nowadays when someone doesn’t know something, they are not easily challenged, they can Google it and reply. The contrast is shown here in the film, when people had to be well-read to participate in real-time conversations, face to face.

In an era when being relevant on social media creates a sense of identity, I thought of how people have multiple lives and multiple identities online. When vanity is everywhere, people paying to look like their favourite celebs, notifications buzzing all the time, with new photos of beautiful celebs to add to your anxiety… Why don’t we trust a profile that has no proper verification? No profile photo? We upload a photo and wait for likes and comments, for validation. When someone’s world turns upside down they deactivate their profile. Many people are very comfortable chatting online but are totally different people in person.

Our protagonist says, ‘I would be comfortable maybe if I was corresponding by letters etc.’ In this way, the face of another (1966) makes you explore the depth of human psyche, insecurities, need for acceptance, validation, desire, repulsion etc. and the anxiety is most palpable now in 2019.

“Individuality” is emphasised in the shot when we see as a grid of head shots of random Japanese people. It made me think of online profiles and how we judge someone from a profile photo. A photo can speak volumes about you. It determines whether you get the job you desire, the partner you desire and more. The camera then focuses on a crowd of people walking down the road, it heightens the sense that we all are only a speck in this overcrowded world, so what is our identity? Where is out individuality? Then the camera zooms in on some passers by. From the crowd to the specific. This reminded me of an illustration by Korean artist Ryeou Won Son. 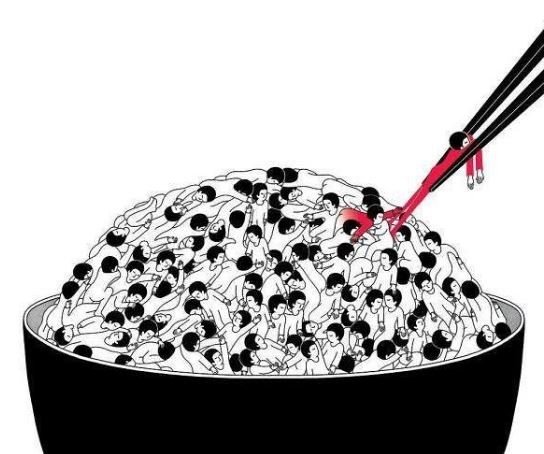 It is abstract art. I interpreted it as focus on individuality, identity, over population etc. The artist uses black and white mainly but red to highlight the individual. It’s like the zooming in of the camera in the film to focus on a few faces from the crowd. Since it’s a black and white film, the viewer’s perception of the scene heavily relies on the lighting. This is brilliantly used in the scene when the protagonist asks to switch off the lights, he is more confident in the dark now as he doesn’t want to be seen.

We usually see disfigured people as villains/monsters in movies. Here our protagonist is jealous of his wife’s looks. He is so bitter about the twist in his fate that he mentions more than once about disfiguring his wife’s face but he doesn’t get a chance to avenge or carry out his actions and the viewers are saved from the cliché. He gets a new chance with a new face. There is no sensationalisation or shocking revelation of his disfigured face. It is shown in a far away shot where you can see the full frame of the protagonist. This makes him seem human and makes the viewer instead focus on his actions and the way he panics at the idea of being seen that way.

With his face bandaged, we heavily rely on the protagonist’s anguishing comments. His voice is now his identity. But he extinguishes this too by saying, ‘Anyone will sound like this in these bandages.’ In that instance, the viewer falls from the thin platform the protagonist had created. That small connection which had hooked us. If not his voice, then who is he? And at this point, we truly feel for the character. We understand how devastating the situation is. We all have a certain image of ourselves and that comes from what people close to us think of us. The protagonist here is devastated at being treated differently by the people in his life. He longs for routine especially by his wife. It seems to be his most definable quality, to be loved, to be desired.

For viewers who might find his presence and thoughts overwhelming, there is a parallel story which shows how a girl with one side of her face scarred, is brave enough to go out in the world. She is confident because a side of her face is still beautiful and she is trying to make a life for herself but it is difficult for her too. She is constantly judged. Even she wishes to be desired. We see scenes from her life and the viewer wonders if this character has any connection with our protagonist who actually dominates the screen space.

It is interesting to view both the stories unfold simultaneously as separate narratives. The girl deserves her story to be told without having to play a part in the protagonist’s life. So it’s like watching a short film within a larger film and it can stand alone. The scene of an unsuccessful attempt at raping her made me think of plight of women like her, victims of acid attacks and how women are still subjected to violence in 2019, making it very difficult for these women to move about in society and find jobs. Though for the girl it is a scar from a bomb explosion, possibly, from the war.

What saves the movie from being a depressing watch throughout is the intellectual conversation that takes place between characters. The philosophical questions that the protagonist asks his wife. The questions that the psychiatrist asks our protagonist. They seem well-read and always have intellectual conversations, we are not told their background stories, just in the way they reply. 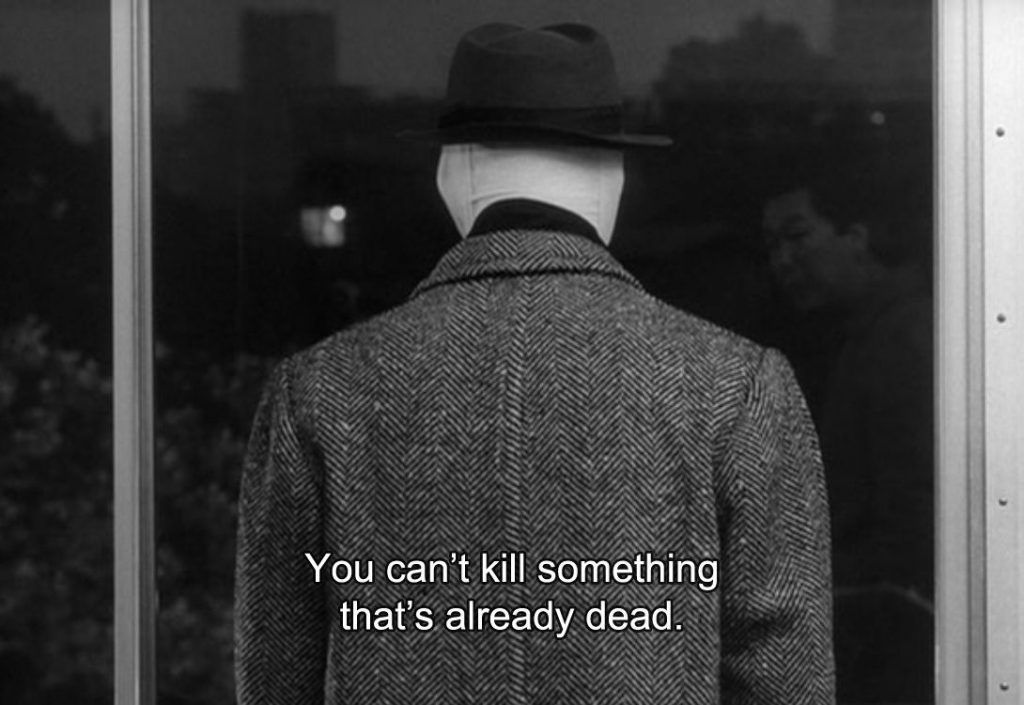 Another character that stood out is the mentally challenged girl. Identity is name, face, voice and what else? Smell. Here, the girl has a very sharp sense of smell and can recognise our protagonist immediately, even with the new face. It challenges his idea of identity. The heightened sense of smell of the girl is pointed out to the protagonist only later. I was reminded of the character from Revolutionary Road who is admitted to a mental asylum. He is a brilliant mathematician who has a few interactions with the main couple and in just those few interactions he challenges their notions of life.

In The Face of Another (1966), the vulnerability of the girl is focused on and we get to guess if our protagonist will take advantage of her. I wish the girl had been given more screen space, more to her character because even her sharp sense of smell is degraded when the psychiatrist says, ‘Even a dog could smell you.’ Then the protagonist goes on to smarter people to test this theory.

The most interesting part of the face of another (1966) is after the protagonist gets a new face. There is a hook which makes viewers want to know the protagonist’s ulterior motive. Though his motive is predictable, how events unfold is not. If you’re looking for a thought-provoking film which explores difficult themes, then you should watch this. It is however, deeply disturbing, so if you like Kafkaesque stories and can bear the heaviness of the story, then do watch it.

Unbelievable Netflix (2019) Review: The Truth Will Set Us Free