'The Looming Storm' possesses the vision to look beyond the familiar psychopathic killer narrative and views the flagitious serial-murder as an inclusive part of the larger transgressions inflicted by the inhumane system.

The rapidly industrialized provincial towns, the anonymity and isolation of the local working population have served as the dangerous backdrop for elusive serial killers in cinema (much of it based on true stories). Alarming rate of industrialization (irrespective of Capitalist-Communist ideologies or Western-Eastern cultural divide) and the related disparities in social and economic status have long been established as a significant pre-condition for serial killings. While American serial killers of the 70s and 80s strongly captured the imagination of public, thanks to scrupulous domestic investigations and media spotlight, there are equally vicious murderers concealed behind the iron curtain of Cold-War-era Communist states and crisis-ridden faux-democratic countries with an incompetent police force.

Similar to all the movies mentioned above, The Looming Storm isn’t primarily a thriller featuring the edge-of-the-seat hunt for a serial-killer. The unwavering focus falls upon the gloomy atmosphere that strongly expresses the entire disintegrating social and economic structure, where serial murders happen to be one other saddest, unproductive aspect of the reckless modernization. The chunk of the narrative unfolds in flashback and set in the year 1997; the year when Chinese regime started implementing the ‘necessary’ changes to gain economic foothold. The common working man of China is crushed by the sudden shut-down of debt-ridden, under-performing factories. When we first see the protagonist Yu Guowei (Duan Yihong) – freshly released from prison in 2008 – he was asked to spell his name for an ID card. He impassively replies: “yu” for unnecessary remnants, “guo” for nation and “wei” for “glorious.” Hence Yu is referred as one of the million faces left-over amidst his country’s race towards ‘progress’. 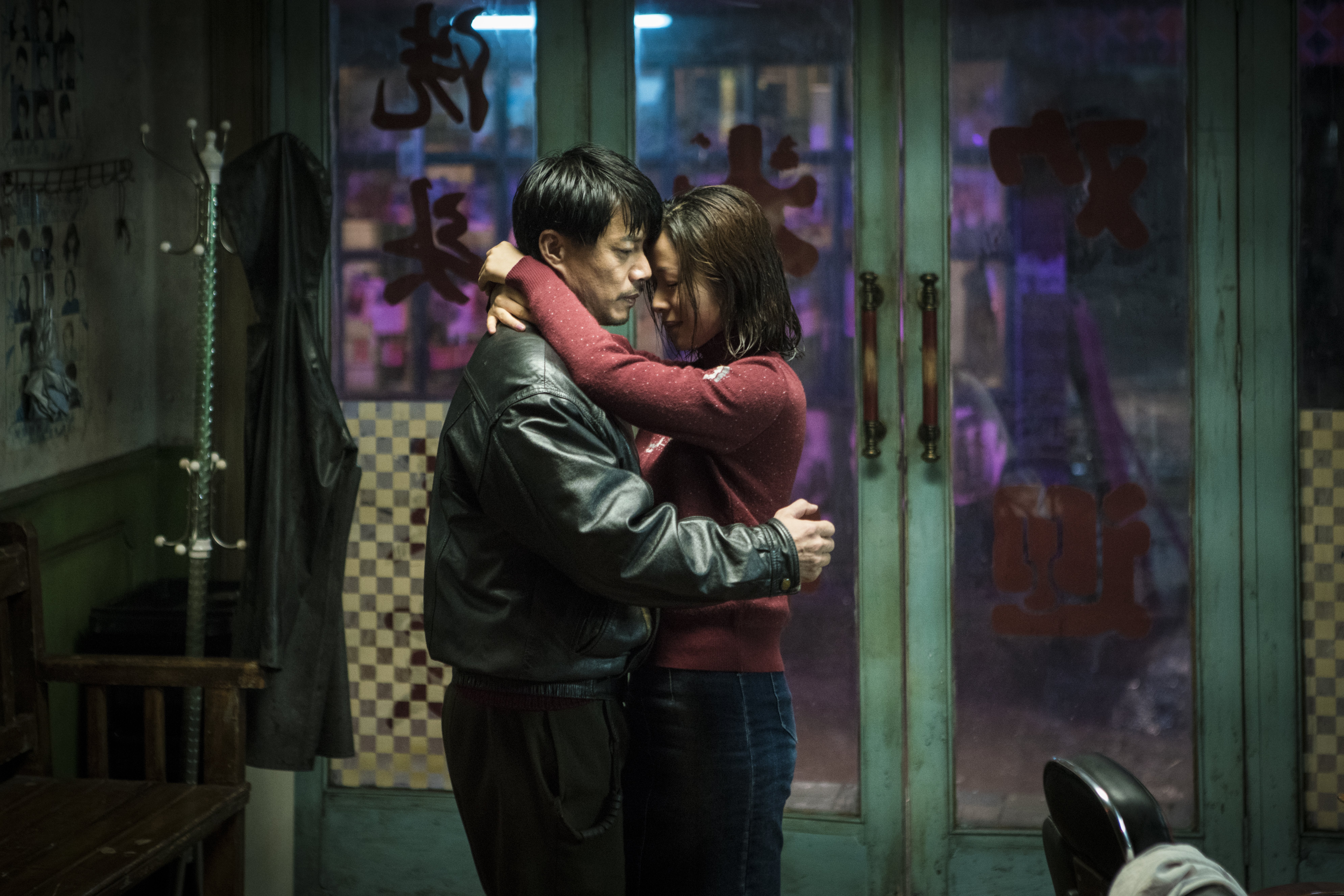 The action then jumps to 1997 with Yu riding his sidecar scooter in the soggy roads of the dying town, the hulking and decaying factory structures lay in the background like a giant fossilized creature. Yu is the chief security officer at the local factory. He catches petty thieves and even receives the commendation of ‘model worker’ for the year. But Yu is interested in police work and fancies himself as a highbrow investigator. Since there’s very little to do in this mono-cultured town, Yu and his clumsy, young sidekick Xiao Liu (Zheng Wei) inquires about the brutal murder of a young woman, whose body found near the factory grounds. It is the third murder within a short time-period and even the limited evidence, collected by understaffed local police, points toward serial-killings.

Chief Zhang (Du Yuan) is in charge of the case, a good yet reticent and exhausted detective, working well past his retirement age. Playing up his detective aspirations, Yu visits the scene of an illicit local disco (set in a crumbling stadium) and talks with a hooker to ID a possible suspect. Yu believes his unofficial investigation may bring in the killer. The tactics somehow works and he even chases after a hooded figure in the industrial grounds and railroad yards. But the mysterious guy escapes, not before Yu obtaining the alleged killer’s shoe. Later, he meets a pretty sex worker Yanzi (Jiang Yiyun) and seems to have developed an affection for her. Yanzi believes the same and she relishes when Yu buys her a hair salon (her dream is to be hairdresser in Hong Kong) to lead a humble, dignified existence. However, Yanzi is wholly unaware of Yu’s obsessive pursuit that soars to dangerous proportions.

Director Dong and cinematographer Cai Tao visualizes the rain-soaked town in washed-out colors and despite the ominous, disconcerting nature of the setting, it all looks oddly beautiful. The ceaseless down-pour, the slumped-shoulders of workers cloaked in brown or black rain-coats, the muddy streets, derelict shops, and the hulking factory instills a sweeping sense of time and space which is utterly captivating. The writing, especially the middle-part showcasing Yu’s tentative connection with Yanzi, mostly remains hurried and the characters are under-developed. The tonal changes are bit erratic and viewers may not quite get a firm grip on the action unfolding on-screen. With a tighter plot structure, the film’s complexities and weighty themes could have been established lot better.

Dong Yue’s movie would naturally draw comparison to Memories of Murder, which had a much even pace and profound psychological dimension. Here the script is just too heavy on symbols and metaphors, while missing out on strong emotional core (in spite of the unexpected final twist). Nevertheless, Dong’s deft directorial skills and immersive aesthetics make up for some of the writing flaws. The Looming Storm definitely possesses the vision to look beyond the familiar psychopathic killer narrative and views the flagitious serial-murder as an inclusive part of the larger transgressions inflicted by the inhumane system. Yu’s futile chases and eventual self-destruction tells us about the causalities of rampant economic policies (a society that not only ostracized him but also totally erased his past existence). If only the personal narrative was as clear-eyed and gripping as the thematic impulses or political agenda, the end result would have been more astounding. Still, The Looming Storm (120 minutes) is a compulsively watchable moody drama that offers an interesting commentary on modern China’s disparity-ridden socioeconomic shifts.

Peeping Tom Review [1960]: A Fascinating Journey Into the Mind of a Serial Killer