We couldn’t deny the deep truth in the unabomber’s condemnation of technology. Right up to the eerie final shot, the series sort of makes us to reconsider our infrangible relationship with technology. At the same time, it shows how ideological determination that doesn’t take humanity into account isn’t worth much.

It is hard to believe that there was once a man who terrorized the American nation by sending up deadly bomb packages to airliners and universities, and eluded capture from FBI for more than a decade and half. After 9/11 with the Bush regime zeroing-in on Afghanistan, the horrifying acts of Ted Kaczynski, the man better known as Unabomber, may seem comparatively minuscule. Yet before the alleged era of jihadist terrorism, Kaczynski planned out a campaign of terror to draw attention to his views on the ‘insidious’ technological progress. Between 1978 and 1996, the Universities and Airline Bomber (unabomber), sent ingeniously designed homemade bombs (16 bombs in total), across the nation through the U.S. mail, resulting in the death of three and seriously injuring 23 other people. Tasked with tracking down the serial bomber, FBI was lured into one of the longest and most expensive manhunt in U.S. history. Considering the renewed public interest in true crime and its dominance in the TV series format, Discovery Channel have made a fine attempt to showcase the gruesome crimes, painstaking investigation, and the eventual arrest and conviction of Ted Kaczynski. Conceived as eight part limited series and created by Andrew Sodroski, Jim Clemente, and Tony Gittelson, Manhunt: Unabomber Season 1 works as a captivating, binge-worthy show despite few pedestrian and formulaic fictionalizations. Moreover, the series is worth watching to just witness Paul Bettany’s powerful performance in the titular character.

The mystery in a true crime work entirely deviates from the mystery in a whodunit. Every fact of the crime is neatly laid out in the public forum and so there’s not possibility of mind-blowing ‘twist’. Yet what makes true crime projects interesting is the way one looks beyond the facts and studies the human nature at its worst. It delves deep into a person’s psychology or society’s collective psychology to provide the whole picture of the crime, oft-ignored by sensation-seeking media clippings. Manhunt Unabomber episodes stay intriguing till the final one, although very early in the 1st episode Ted Kacyznski is shown behind the bars. The fascination lies in perceiving how the exhaustive investigation led to the capture of Ted and how all the evidence were mapped out to trap the perpetrator in the court. The first three episodes of Manhunt constantly move between the Unabomber investigation in 1995/1996 and the lead-up to Kaczynski’s trial in 1997/1998. Similar to the protagonist in David Fincher’s TV series Mindhunter, James Fitzgerald (Sam Worthington) is an FBI agent and ingenious criminal profiler. He started out as a beat cop, but after lot of hard work he becomes part of FBI. By this time, the Bureau was absorbed in its costliest investigation of unabomber threat. 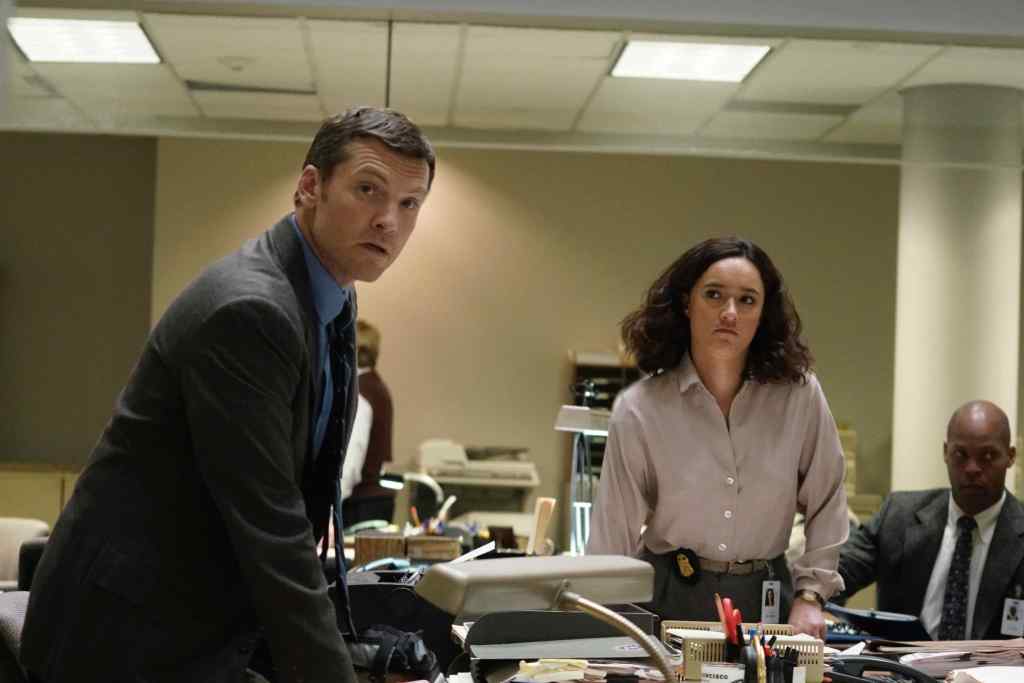 Fitz casually deconstructs a cryptic letter sent by the unabomber, which earns him a place in the task force. However, his superiors expect him to adhere to the structural conformity, and crushes down any of his well thought-out theories regarding the unabomber’s personality. Fitz and his superiors get lucky when the unabomber issues an ultimatum (in September 1995): he will stop his bombing campaign, if the FBI allows Washington Post and the New York Times to publish his 35,000-word, 56 page manifesto, titled “Industrial Society and Its Future”. Fitzgerald and his team dug deeper into the manifesto and used unabomber’s writing style, his linguistics to figure out clues about his true identity. Fitz termed his method as ‘forensic linguistics’ which is initially met with derogation and  skepticism by many of his peers. When the manifesto goes public, David Kaczynski (Mark Duplass) reluctantly contacts FBI and feels that the tone of unabomber’s manifesto resembles the writing of his estranged elder brother Ted. Armed with only David’s doubt and Fitz’ profile based on linguistics, the serial bomber was eventually brought down (he is currently alive and serving eight consecutive life sentences).

The early episodes does suffer a bit from unnecessarily jumbled narrative and glib characterizations. Fitz is portrayed as the loner who increasingly gets obsessed by unabomber to largely abandon his worn-out wife (Elizabeth Reaser) and three kids. The narrative trajectory involving Fitz’ familial relationship is all too familiar and predictable. By 1997, after the capture of unabomber, Fitz himself is seen living a life in the woods. His obsession with the case has brought upon a sort of a spiritual awakening and to follow the path of Ted. But soon FBI agents knock on Fitz’ cabin, seeking his help to extract a guilty plea from Ted. This leads to a fine verbal stand-off, where Bettany’s unabomber cleverly picks apart Fitz’ mode of investigation and staunchly believes he might even get free. The 1997 scenario, however, increasingly gets convoluted, compared to the laser-like focused narrative (of 1995) that led to successful capture of Ted. Part of the reason is that such confrontation between Fitz and Ted didn’t happen in reality (the real Fitz says he has never met the unabomber face-to-face). It was all written (a plot conceit) to showcase the deviously clever nature of the unabomber, in Hannibal Lecter-style. The 1997 narrative works well only in the final episode as the dramatization and reconstruction of courtroom trial provides lot of fascinating tidbits.

Despite his cruelty, Ted Kaczynski is termed as a genius (with an IQ of 160 plus; anyone with an IQ above 140 is supposedly seen as a genius). He studied Mathematics at Harvard at the tender age of sixteen, destined to make into the top-tier of intellectuals. But there were harsh changes in Ted’s life journey which reduced him to live in a tiny backwoods cabin with no running water or electricity for decades. And, there in his self-inflicted isolation, Ted carefully concocted the schemes to send mail bombs to anonymous persons through United States Postal Service. Much of Ted Kaczynski’s thoughts laid out in the manifesto are oddly prophetic. Twenty years before, he wrote about how technology and our reliance on it would come to dominate our daily life, which couldn’t be refuted in the smartphone and social-media era. Alas, he didn’t just stop with censuring technology and our blind trust upon it; he deviously thought that planting bombs and blowing people as a kind of symbol would gain immediate public attention and lead to a radical change. While we can validate the truth in unabomber’s argument, we could never come to terms with his vehement approach. 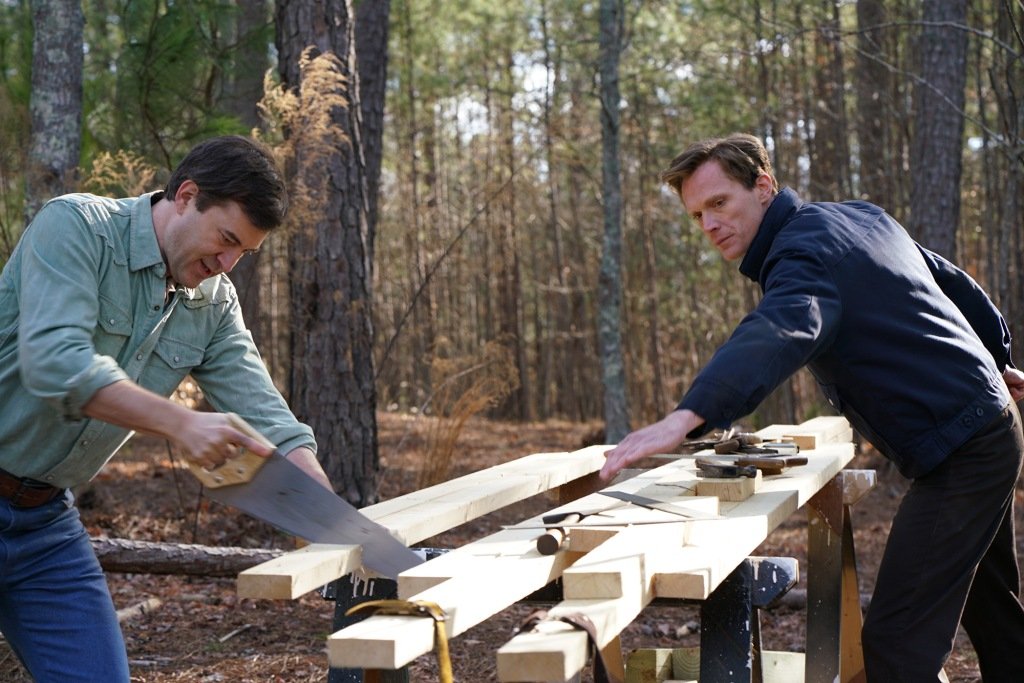 James Fitzgerald has served as the show’s ‘consulting producer’. He says he tried to contact Ted Kaczynski to present his side of the story. But Ted didn’t cooperate, even though the series is said to have accurately portrayed Ted’s life. Ted’s friendship with the librarian and her kid in Lincoln, Montana seemed like an effective dramatization. But it all happened in real life too and the whole of small town Lincoln believed Ted was just a harmless hermit. In fact, the best episode among the eight is the sixth one, which follows the pressures and trauma heaped upon Ted from adolescence. We could almost feel sorry for the guy, who is persistently betrayed and ostracized. And, Paul Bettany makes this episode more memorable. He thoroughly shows his character’s vulnerable, sympathetic side alongside the origination of his evil and apathetic nature. Director Greg Yaitanes does a great job in visualizing the murky psychological temperament of Ted. Despite certain clunky writing, Yataines also does well in emphasizing on the dichotomy existing between Ted and Fitz. Both in their single-minded obsession and isolation resemble each other. Yet what separates Fitz from the criminal is his genuine emotion while seeing the bombing victims. Like Fitz, we couldn’t deny the deep truth in the unabomber’s condemnation of technology. Right up to the eerie final shot, the series sort of makes us to reconsider our infrangible relationship with technology. At the same time, it shows how ideological determination that doesn’t take humanity into account isn’t worth much.

At nearly six hours, the eight episodes of Manhunt: Unabomber is a thrilling and well-paced crime drama about one of America’s most notorious and horrifying crime sprees. Few of the fictionalized narrative remain too familiar to rob the series of its momentum. Nevertheless, the excellent casting (including the towering performance from Paul Bettany) and directorial merits saturates it with curiosity and alacrity.