In today’s world, where our perception of beauty depends on how it is advertised to us, the younger generation is trying to break the conventional lookout. They wish for a kinder world for everyone, or at least that appears to be their intention. ‘Mirror, Mirror’ (Spanish: Espejo, Espejo), written and directed by Marc Crehuet, attempts to navigate our complicated relationship with the concept of beauty. This Spanish comedy streaming on Netflix uses a mirror as its narrative tool to illustrate further on the same topic. It uses a set of a cosmetic company, which proves to be lucrative for the critique.

We’re given an introduction to the lives of five employees from a cosmetic company. One of them – Paula (Natalia de Molina), is a younger employee who even looks and speaks like an informed influencer from a younger generation. The second one is her sister – Christina (Malena Alterio), who works at one of the higher positions and who helped her get the job. The third one is the manager – Álvaro (Santi Millán), a middle-aged, straight, white man who is so full of his smugness. The fourth one is Alberto (Carlos Areces) – a fat, bald, and conventionally unattractive man. And the last one is a lady – Antonia (Betsy Túrnez), who sits at the front desk, welcoming the guests.

These five people go through the mirror realm and speak with their reflections to understand things deep in their psyche. For the anniversary of their cosmetic company, Paula makes a video that, in her words, celebrates all kinds of beauty. By getting Alberto, an elderly employee, and a trans person, among others, she attempts to capture a new-gen version of breaking the barriers of beauty. When Christina sees it, she considers it too progressive for their company and asks her to speak with the higher-ups before sharing it with the public. Despite her sister’s suggestion, Paula posts the video on the internet.

It doesn’t please Álvaro – who fits in the definition of conventionally handsome. He asks her to take it down and asks to make it with attractive models, the way they have always done. Not long after, when he speaks with his senior, he realizes that the company president likes the video and its approach and wants it to be precise. Álvaro mentions it to Paula but makes himself the kind hero of the negotiation who fought for her! Meanwhile, he learns her lingo and the details that he can imbibe from her to create an impression that he is, in fact, aware of the gender & sexuality spectrum. However, at the meeting, he miserably fails in his attempt. The female president then asks Paula to present.

This young female employee taking his position in this scenario shakes the power dynamic for him. Born wealthy and always brimming with confidence despite being mediocre, he never had a self-reflection phase. The power shift makes him reevaluate his life choices and whether he is worth his position. It’s as if he can’t see things being in his control anymore. Meanwhile, Christina goes through a sort of awakening when she sees her reflection being that of a man. She tries to let it go but can’t seem to shake it off that easily. After seeing liberated trans men in Paula’s promotional video, she finds herself in this existential crisis. Her conservative father always made derogatory remarks toward the LGBTQ+ community people, which made her suppress her desires. 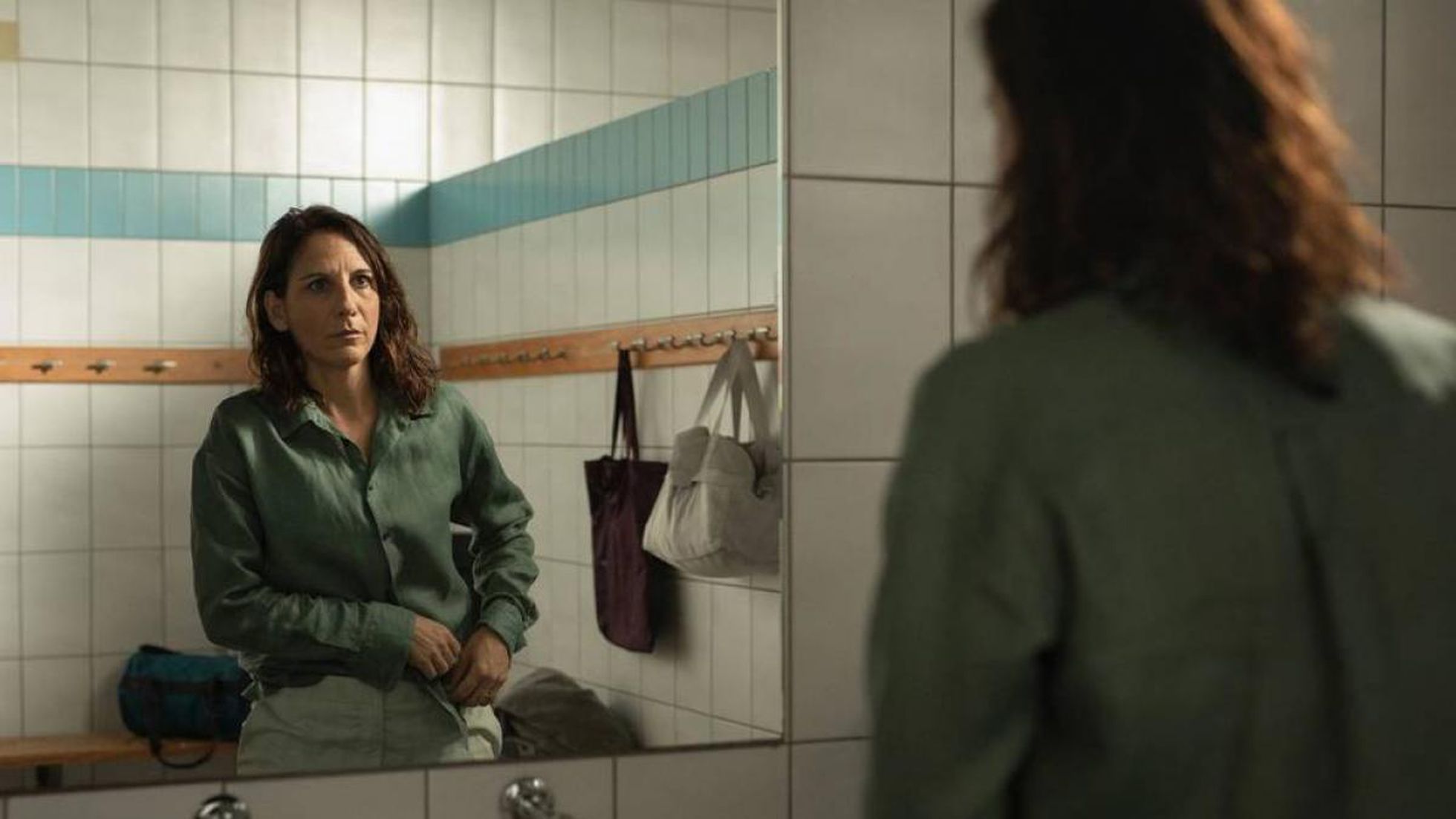 The other two characters suffer through their share of insecurities. Alberto, who desires someone like Paula but can’t express his feelings, speaks with a confident version of himself in the mirror – who trash-talks him into changing his attitude to change his reality. On the other hand, Antonia is annoyed by being constantly ignored despite her pleasing welcome. Her desire to burn the place down becomes apparent through her interactions with her reflection. None of the employees spend even a minute interacting with her and consider her worthless.

An underwhelming introspection of beauty

If you look at the script of Mirror Mirror, you will think it has many great ideas on paper. The film, written and directed by Marc Crehuet, tries to navigate the complicated relationship we have always had with the concept of beauty. It deals with people from different privilege levels, not just of wealth and gender but also of outward beauty. Taking a mirror as a narrative tool for self-reflection for its characters makes a direct comment on their need to express their desires and work on them. The mirrors represent their other selves, whom they are scared to confront.

The concept is interesting on its own, despite being too on the face. The execution isn’t ideal or inventive to take the film to the next level. Although intriguing, the investigation of beauty only manages to scratch the surface and does not say anything that hasn’t been saying before. Paula’s character arc still seems like an exciting addition for its lookout into the attention-hungry younger generation using politics for their personal gain. Yet there is not enough to navigate this character’s journey beside the exciting revelation of her being just as two-faced as the others.

The script deals with the other characters with a largely conventional approach. The smug, playboy, rich man goes through his stages of self-awareness. A trans-man confronts his reality after having lived in a limiting existence of the fear of others or the fear of making a no-return, life-changing decision. A conventionally unattractive man embarrasses himself with an iota of attention he gets from a conventionally attractive woman. A lady who kept living her life being ignored…well, she just wants to burn the place down! Very little is revealed about the characters beyond what I’ve mentioned here.

That is where the film fails. It limits itself to its baseline ideas to not let any of its characters breathe a life beyond what they mean thematically to the film. While the argument is valid and welcome, the narration is too ordinary to consider it a great movie. Its attempt to critique the cosmetic industry and its advertising doesn’t dig deep either. The ride might be amusing till it lasts, but the lack of character development makes the film a forgettable experience.

At the anniversary gala, the dynamics between people change due to the stages of self-realization they go through. Álvaro appears to have become humble and showcases his guilt for ignorance or, more so, his mediocrity. Alberto professes his love to Paula, only to be let down by her. While his belief that it would succeed is naïve, it appears that Paula’s brand of acceptance is limited to getting success and doesn’t reflect in her behavior. She is only using it to go ahead on the corporate ladder. When her sibling comes out to her as a trans man, she finds it all too much to handle. So, the speech she was confidently preaching means very little if applied in practice.

That also reflects in her subsequent meeting with the president, where she mentions how trans folks shouldn’t be present in the video since they need to do what’s best for the brand. Her state of utter confusion to confront the reality that she was amusing herself with from a distance becomes visible.

Related Articles: Do Revenge Movie Ending, Explained – What Plan Do Drea And Eleanor Forge To Bring Down Their Enemies?

Where to watch Mirror, Mirror