Films of the past have been set in the 2020s with a dark depiction of the future. Even if the displayed setting wasn’t dark, it presented an alarming glimpse at what would have been looked at as an imminent future. A movie that comes to mind is Real Steel. It foretold how human boxing would give way to robot boxing. That is far from the case, with the elite pugilists continuing to rule the roost and yesteryear stars returning for their moment in the spotlight. 2194’s Jung_E shows that humans have found other ways to live, i.e., in shelters on Earth and in space colonies. Could that be the future? We believed in the 80s and 90s portrayals of films of the 2000s. Hence, such a depiction must be taken with a pinch of salt.

What can one say about the depiction of Earth 171 years into the future? Climate change is a glaring concern with the earth getting warmer, the ice disappearing, and the air becoming toxic. However, human tendencies like sarcasm still exist. Unfortunately, greed also exists and is at the forefront. There is loyalty and devotion too, which present Jung_E with the values to proceed. These values lend meaning to this story of a corporation’s aim to create the perfect combat AI robot and a daughter’s wish to reconnect with her mother. As these personal and non-personal reasons come to the fore, the late Kang Soo-yeon gives audiences a reason to stay with this film.

Right after the opening messages, audiences get introduced to a world where humans’ refuges are metal bodies to protect them from what their ancestors did. The action begins at what seems to be an outpost, where the signs of battle are evident. The dark interiors see boxes and other objects scattered around. Isolated flames provide evidence of the battle and serve as a source of illumination for a fight between the legendary warrior Jung-yi and a horde of enemy robots.

It isn’t exactly clear whether Jung_E is set on one of the colonial outposts or on Earth. Based on the presence of Korean actors, audiences can safely assume that this particular outpost is on the Korean Peninsula. If not, it’s a complete oversight of the casting team and the producers for not representing various countries of the world on a space outpost. Wasn’t that the case in 2012? The film saw people from all over the world come together on a vessel to escape the end of the world.

Getting back to the fight, I liked that none of the action sequences were exaggerated. Despite robots battling a human in a tech suit, the action is swift and grounded. However, Jung-yi falters later on, and the audience learns that this has been the case for a long time. It is a simulation, and the human is actually a droid akin to a Cyborg from the DCEU. A film depicting humanity trying to create the perfect combat AI to help end war should have presented a scene where they faced danger from external forces (in this case- the Adrian Republic). That would have heightened the need to have such an invention. This seemed to be a missed opportunity.

Kang Soo-yeon’s Yun Seo-hyun seems glassy-eyed when listening to people discuss the project and stares blankly at them or the camera. This gives way to a fiery stare of resolve when on the opposite end of a weapon. We learn why it is personal for her, which leads to the question. Why didn’t she ask these questions earlier? It could have been because the project’s personal nature clouded her or served as a source of single-minded devotion for her.

While the film may seem slow, the story progression justifies it with an exploration of Yun’s state. We are allowed to understand why she is invested in the droid. The build-up, opposition, clash of values, and resistance give way to a power-packed climax with a particular sequence that makes it worth watching. It may catch you off guard if you are consuming the film as though you are just staring into the distance. However, the premise may have you expecting something else, and you may feel betrayed by what plays out. I advise buckling down and watching it because it’s a good story with the aforementioned power-packed ending.

The ending saw Seo-hyun and Jung-yi escape the facility and flee on a train. However, Sang-hoon was there, and he participated in a battle against them on a moving train with many robots appearing to aid him. 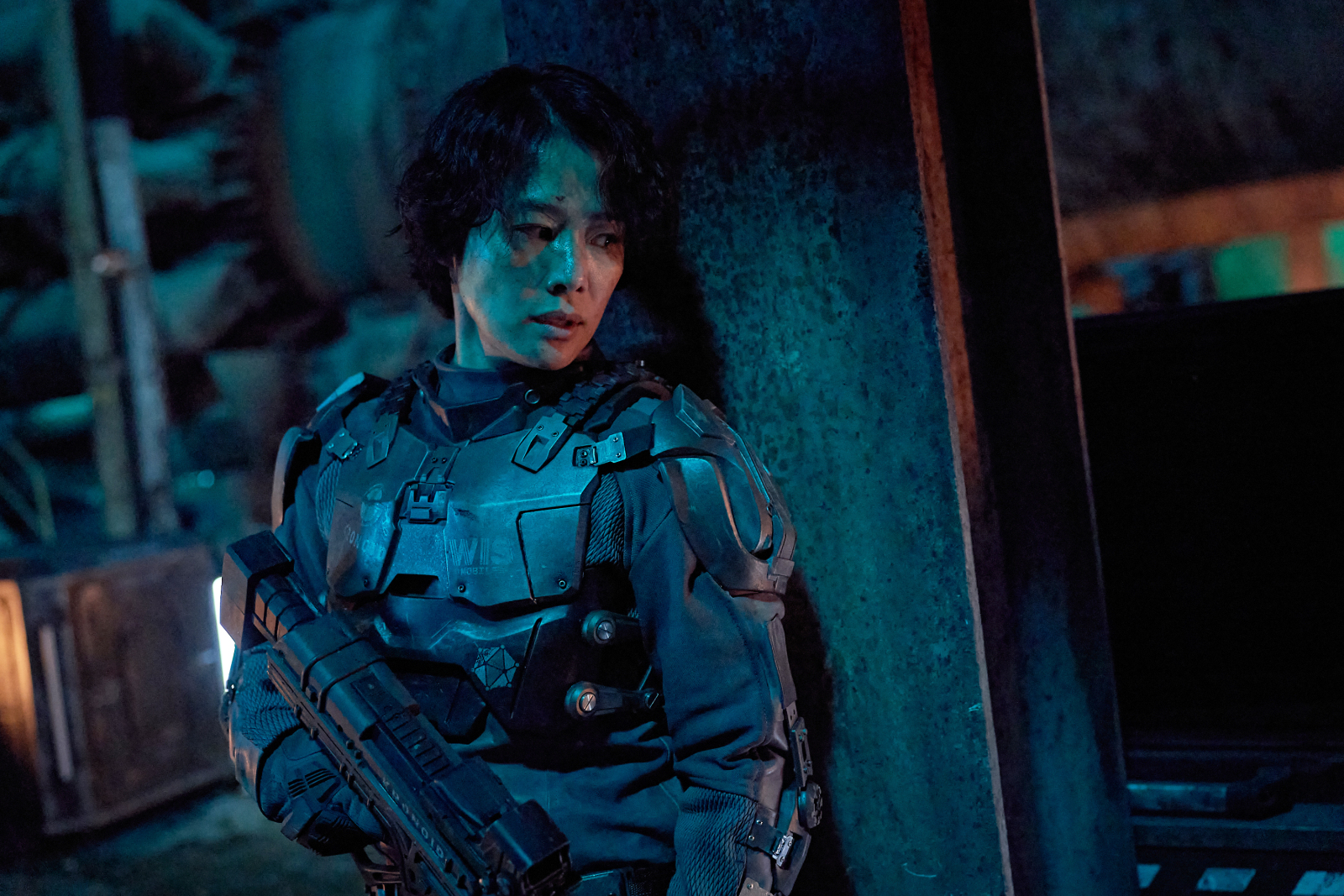 How did Jung-yi find another gear in her fight?

Captain Yun Jung-yi had been failing in the simulator battle for ages. It was almost as though she had lost the drive to succeed as she had managed to make enough for her daughter’s surgery. Hence, the robots may have fancied their chances on the train. However, Yun revealed she had removed Jung-yi’s daughter’s memories. This may have converted the legendary mercenary into a pure combat warrior without intrinsic limitations.

There is another school of thought, though. Was the removal of memories a bluff? It could have been so as Jung-yi fought like a warrior when there was something at stake and seemingly fell when she knew her daughter would make it. Hence, by goading Sang-hoon to attack her, Yun gave Jung-yi a reason to fight. This helped the droid, with the legendary mercenary’s cloned brain, finally find another gear to succeed.

Why did Seo-hyun tell Jung-yi about the future where she would fall in battle?

After years of defeats, Seo-hyun knew that Jung-yi had to be given some information to beat the simulation. As a result, she told the droid the precise moment she fell in battle, hoping that one piece of information would prove crucial.

Why did Jung-yi care for the droid?

The droid contained the cloned brain of Jung-yi, i.e. Seo-hyun’s mother. She knew that her mother only fought so that she could help fund her treatment. The will to survive and get money is what saw the mother turn into a legendary warrior and keep the Adrian Republic at bay. Once the money was accumulated and surgery scheduled, things changed, as Jung-yi didn’t have the serious urge to fight. It may have been a reason why she suffered her first defeat.

After years of defeat with her brain cloned to a droid, Yun recognized that Jung-yi could find another gear if she had a reason to fight. It also would allow her to ask her mother questions away from the scrutiny of the authorities.

Why did Sang-hoon snap?

Sang-hoon was the director of the center where the scientists were trying to craft the perfect combat robot. However, unknown to him, he was also a droid. In the final train scene, when Jung-yi punches him in retaliation for him shooting Yun, he realizes he is a droid. This was because a piece of his skin slipped off. This resulted in him snapping and engaging in a brutal war with his fellow droid.

How did Jung-yi escape the law robots?

Yun took off the Jung-yi mask from the specific droid that had her mother’s cloned brain. The droid then escorted Yun (a supposedly injured individual) away from the site where the robots had attacked. Once away, they got into a train and fled before being intercepted.

After taking a bullet wound and wishing her brain-cloned mother luck, it’s obvious that she passed away due to her wounds. However, that isn’t explicitly shown on screen. The character did look broken and was a complete wreck as she sat limp against the wall of the train.

Captain Yun Jung-yi being cloned and made into a combat AI would be proof enough that she was Jung_E. It may be seen as a tribute to Wall-E.

However, director Sang-ho Yeon opted to leave nothing to interpretation about the identity. In the final stills, we see the robot perched on a mountain summit in the forest. As the sunlight illuminates its metallic exterior, the name Jung_E on its forehead is clearly visible.

What did you think of Yeon Sang-ho’s science fiction film?

Related Content: I Am Mother Netflix [2019] Review – A Slick but Underwhelming AI-Themed Thriller