Moloka’i Bound (2019) Review: Writer/director Alika Maikau’s Moloka’i Bound is set in Hawai’i, the place where he grew up and knows closely. It does not take the contextual reference of the title literally- Moloka’i is the fifth most populous island of Hawai’i and is famously known for its tall, enveloping sea cliffs.

Here the perimeter of this landscape is developed in the central relationship between two characters that Maikau chooses to depict so earnestly within the eight minutes of screentime. The characters here are enveloped by their past as well as their present in a way that prevents them from realizing what lies ahead. The result is a deeply felt portrait of a relationship that must endure a growing sense of redemption at its core.

Moloka’i Bound follows Kainoa (Mandrial-Santos) as he goes to meet his young teenager named Jonathan (Austin Tucker) who has not been picked up after school yet and the conversation that follows in the meantime. We are not aware of their relationship yet, and it is through the free-flowing yet effective dialogue that a connection is realized. At first we question if Kainoa is out there to sell drugs: we question his credibility by his appearance.

Slowly, as we see him interact with Jonathan, filled with reminders of generational differences and pushes, Maikau expertly crafts a relationship built wholly on perception and wordplay. Even when the conversation amounts to little details of their respective lives, it paints a vastly different portrait of their situations. Kainoa’s intentions ring true even if we are not fully aware of where he is coming from. He mends the broken sandal of Jonathan and lights a cigarette for him playfully- palpable in his desire to reach out and connect. 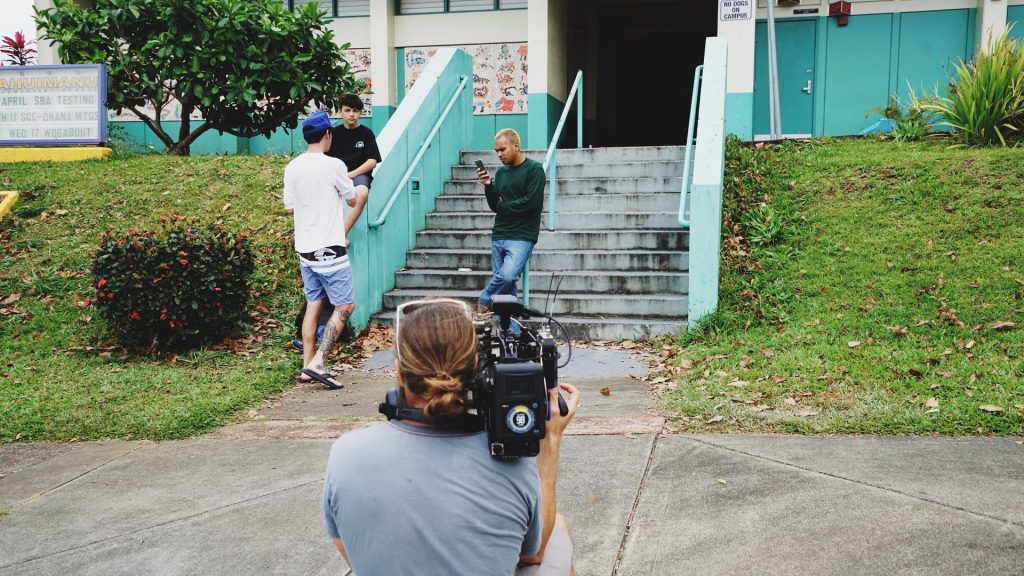 This central conversation is captured and edited with a superb eye for detail by Chapin Hall. The long sequence is balanced with even close-ups and wide shots that beautifully display the individual space the characters occupy in the narrative. The reflection of each character is cut by the difference in their surroundings when observed from the front and then from behind- never overtly present but beautifully designed. Who is enveloping whom? Who is trying to reach out, but cannot because of their institutional beliefs? These reflections are tactfully realized in this single extended conversation.

Notice how the close-ups are linked with the wide shots to display the growing sense of connection in this single conversation. Kainoa attempts to reach as close as possible, and fidgets his way from one point to another- captured brilliantly in a few shots in-between. In this extended sequence that makes up for the majority of Moloka’i Bound, Maikau shows restraint and depth that grabs the essence of a feature film narrative- as if this is just a snapshot of a larger picture we have not witnessed earlier. It is decidedly low-key and minimal in its tone and execution, and this works wonders for the urgent sense of realism that Maikau brings about.

Extracting finely tuned performances from Mandriel-Santos and Austin Tucker, Maikau chooses to focus on a wounded relationship that is revealed at the very end, in a poignant climax. Even if the denouement seems a little predictable, the result is never less poignant that is achieved in the final moments. The brief, yet natural conversation that Moloka’i Bound focusses on, gathers questions of trust and acceptance, of how far can one reach to redeem themselves. Maikau’s short feature captures a snapshot of a relationship that tethers on wider concepts of acceptance and forgiveness as we come to terms with the characters’ actions. It is undeniably rooted in its Hawaiian heritage and yet remains fiercely universal.