My Name Is Vendetta (2022): Netflix’s new Italian revenge action thriller ‘My Name Is Vendetta’ is a passable concoction of all the tropes you can expect from a film of such ilk. Directed by Cosimo Gomez and written by him, Sandrone Dazieri, and Andrea Nobile, ‘My Name Is Vendetta’ has the basic premise to set its protagonists in a cat-and-mouse chase. Filled with decent action sequences and armed with a generic revenge plot, the film relies heavily on the brooding and conflicted performance of Alessandro Gassmann. And luckily for the film, he takes it to a fairly satisfying, if not novel, end.

My Name Is Vendetta (2022) Summary and Synopsis

All it takes is one mistake, and the past can catch up to you and completely change your future. That seems to be the motto of the film ‘My Name Is Vendetta.’ Santo (Alessandro Gassmann) is having a picturesque time with his wife and daughter, Ingrid (Sinja Dieks), and Sofia (Ginevra Francesconi). Ice Hockey practices, driving around rough terrains along a lush valley. Picturesque times and locations demand a picture to be taken. 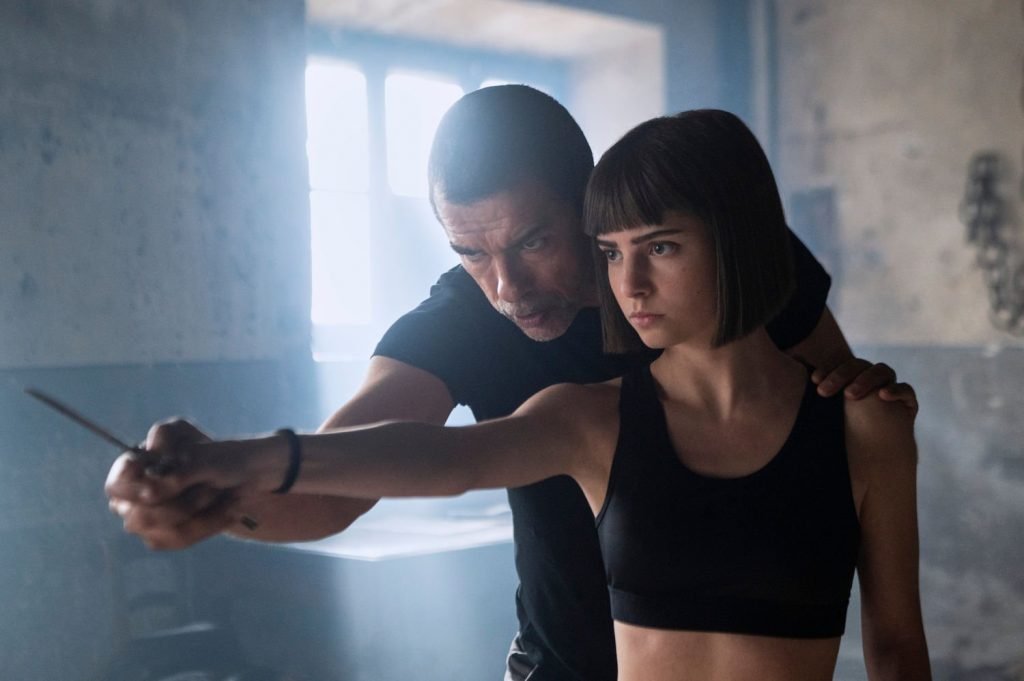 That is Sofia’s mistake when she sneakily takes and posts her father’s photo on Instagram. This triggers a chain of events that Sofia has never anticipated. Santo, not his real name, is an escaped killer from Italy. The Milanese mafia is still searching for him. One such man is Don Angelo (Remo Girone). Santo has killed Don Angelo’s elder son, probably in a feud. And Don Angelo continues to harbor the feeling of revenge.

Don Angelo has employed an extensive social media searching technical team responsible for finding Santo via facial scan searching. And when Sofia uploads that ill-fated photo on Instagram, she seals her and her family’s destiny. Don Angelo’s men storms into Santo’s hillside cottage and brutally kills Ingrid and her brother. Sofia manages to escape, and Santo, caught up in work, inadvertently avoids the fight.

Santo eventually comes to the house to see the wreckage. Distraught and shocked, he manages to find Sofia and quickly flees the place. From police and their enemies. A berserk Sofia gets frightened when Santo reveals his past connections with the mafia. When Santo leaves to get answers from a known associate, Sofia tries to escape with help from a friend.

This does not result well. Don Angelo’s men tail them and catch them. Santo comes at the right time to save Sofia from the killer. Her friend gets killed. Santo and Sofia then travel to Milan together. An injured Santo requires medical help, and Sofia gets him into a shady Chinese hospital that is also an illegal place for abortion. However, Sofia’s photo in traffic footage enables Don Angelo’s men to find them again.

Santo and Sofia about manage to evade the killers, who reach the hospital with guns. Santo teaches Sofia some self-defense arts, and they decide to take the next step. They kidnap Don Angelo’s other son and use him to lure most of the Mafioso. Where Santo, one by one, eliminates all of them. But Santo quickly realizes that he, and his daughter, would not be safe unless they take the final step.

My Name Is Vendetta (2022) Ending, Explained

Why does Santo kill himself?

Santo readies his daughter for the next step. As he calls her, he also charts his entire plan. Santo knows that in this literal cutthroat world of the mafia, killing is the only way to survive. Leave no loose ends. That is why he decides to end Don Angelo’s life as well.

The Art of Revenge: What will happen to Sofia?

However, that is not exactly how things proceed. The police rescue Sofia and the kidnapped younger son of Don Angelo. As Sofia herself did not commit any murder, she apparently gets away with a more minor punishment. She is enrolled in a correctional and educational institute. Don Angelo’s younger song visits her there. The sleazy nature of the son has already been shown before. He extends his seemingly benign helping hand to her in the form of a business card. Sofia takes the card.

However, he quickly shows his true face after coming out of the visiting facilities of the institute. He has taken over his father’s empire. Legal and illegal. He has the Mafioso now at his speed dial. His hitherto not-seeking-revenge nature takes a tumble as he orders a hit on Sofia in her room in the correctional institute.

Vendetta does not die; it only hibernates, waiting for the right spur. Sofia, after all this, seems to have understood that. She prepares her plan and does not wait for the mafia to find her. She escapes her institute in the dead of night. Her enemy only handed her the weapon for her revenge only—the business card.

The card allows Sofia to get inside the office of Don Angelo’s empire, where she waits. Astutely. For the son to arrive. Once he arrives, she lures him by tapping into his general sleazy nature and then drives a knife straight through the underside of the jaw. Like her father has told her, she also ensures that the last face her enemy sees is hers, the one taking the revenge. After all, Santo is right about that. There is nothing crueler and more satisfying than that.

Related: Everything Coming To Netflix In December 2022

My Name Is Vendetta (2022) Official Trailer