Reboot (Season 1) Episode 7, “Baskets”: The previous episode of Reboot focused on the characters trying to rewrite the stories from their past. While Gordon makes sure that Hannah goes ahead to ask out the woman she loves, Reed and Bree keep walking on the tiny thread of falling back in love the way used to during the original show aired. There is another romance featuring Zack, brewing in the background. The new episode works upon revealing more intricate details about the characters that make them seen as more than just actors from the reboot show. Created by Steven Levitan, this refreshing comedy-drama series is streaming on Hulu.

Episode 7 of the series, titled ‘Baskets’ begins with the writers leaving the set after a script run-through. Gordon (Paul Reiser) and Hannah (Rachel Bloom) walk out together and talk about their next tasks for the day. They both go along with one of those tasks after which they head to their respective workplaces for the day. Hannah goes to the set to help with Clay’s looping session and Gordon walks back toward the writer’s room. On his way, he speaks with Alan (Fred Melamed) and shares his guilt for sending his daughter on a task specifically because he hated doing it in the past.

In the writer’s room, he surprisingly finds their show’s star, Bree (Judy Greer). She is there to spend the entire day with them to work on the next script. During their huddle session, she pitches a few ideas that are plainly copied from some older sitcoms. Almost every writer hates her ideas, and when Janae (Korama Danquah) gives a branching idea to hers, she makes this writer feel special. Meanwhile, Reed (Keagan-Michael Key) bumps into Zack (Calum Worthy), who informs him about his plan to go play volleyball. He invites himself to this match, expecting there will be adults playing the game. However, when Zack throws the ball at him, he misses embarrassingly. It also remains unclear whether he is actually good at the sport or not.

On the set, Hannah tells Dennis (Ryan Dietz) being embarrassed for making her father take the harder task of handling Bree’s participation in the writer’s room. Then she sees that Clay is terrible at working on his dialogues during the looping session and realizes that even her father plotted against her for having worked with Clay before. She gets furious thinking about it. Meanwhile, the writer’s room struggles to make Bree feel at home in the writer’s room since she keeps coming up with derivative and dreadful ideas that none of the writers feel should be in the script, looking at their expressions.

Bree slowly tries to charm her way into making the writers accept her as one of their own, at least for the day. She compliments Janae for praising her being thin while all she was doing was stating it as a mere statement. The other younger writers – Azmina (Kimia Behpoornia) to Benny (Dan Leahy), also try to make their way into Bree’s heart. When Gordon objects to it, Benny mentions that they just want to be liked by her. That upsets Gordon, who then gets up from his place and decides to do something about Bree, who is ruining the progress of their script.

On the other side, Reed shows up to play volleyball and finds a bunch of young teenagers, who are much shorter than him. He inquires Zack about it who gave the impression to him that they will be playing with older people. Another thing that worries him is that the teens look unprepared for the game by the way they were dressed, which was not suited for athletic activities. Zack makes him emotional mentioning how these kids made him feel less alone in the past. When two of these kids walk up to him, he mentions the unfair nature of the game due to his height. They make fun of his observation by mentioning David and Goliath’s fight. He finally starts playing with them, but the match soon becomes awkward due to his towering figure.

On the set, Hannah keeps up with her attempts to make Clay say his short dialogues, correctly. That’s when Timberly (Alyah Chanelle Scott) pops by for her looping session, she mentions doing it for the first time, which worries Hannah. However, the very next moment, she performs her long dialogues with conviction, emotional resonance, and perfect comic timing, which makes her and Dennis’ jaws drop. She notes how her dialogues were long and Clay’s are short, which would make it easier for him. It ends up adding more to his stress while already struggling to do his bare minimum. 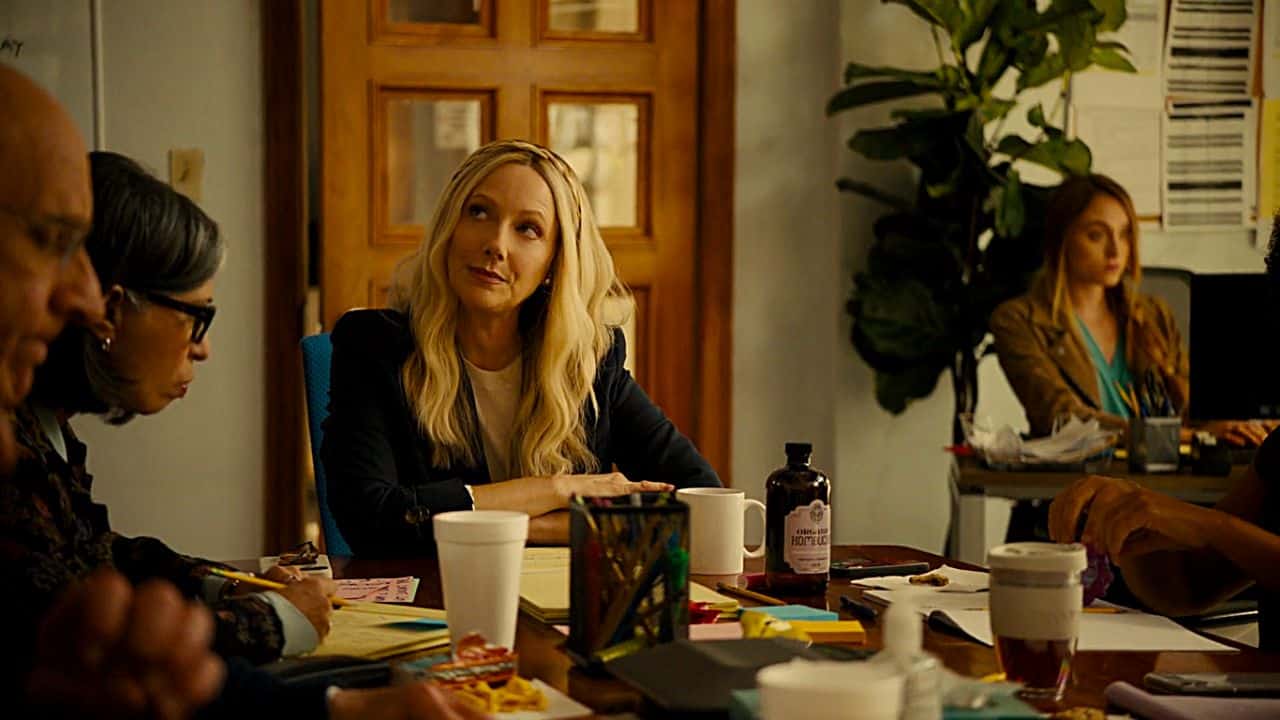 After this embarrassing session, Hannah walks out and jumps into Gordon walking towards the set. They get angry at one another for putting them in those places and decide to switch their roles for the day. Meanwhile, at the game, Reed tries not to be aggressive with his moves and that ends up with him losing the edge in the game. Teens start making fun of him using old-school references, from Frasier to Sabbath. He takes this age-related insult personally and starts playing aggressively. He ends up scoring one goal after the other.

Meanwhile, at the writer’s table, Bree keeps trying to make her character (and herself) look more desirable by introducing cameos of Chris Pine to make men fight over her. Hannah gets frustrated by this and bluntly tells her that none of her ideas would work. She gets upset and walks out. On the set, Clay mentions feeling worse for mistaking his lines because of Hannah who was incredibly kind to Clay despite his mishaps. Gordon decides to implement a different strategy and speaks rudely and puts pressure on him. However, that strategy doesn’t work on him either, and ends up with the same embarrassing results.

During the volleyball game, Reed keeps up with his excellent game and aggressive playing. The trash talk by teens keeps inciting him to play like that. In between, he ends up hurting a teen who starts bleeding from his nose. A young girl starts shooting this incident on her phone accusing him of being antisemitic. He defends himself, but she doesn’t pay heed to his requests and threatens him to put the video online. He goes up to her and tells her to delete the video. Meanwhile, another teenager records both incidents – including him taking her phone away. He tries to stop her from posting it online since he may get canceled and it would jeopardize his career. That’s when Zack comes there. Both the girls, being his fans, decide to agree to his deal for not making the video public if Zack agrees to their request.

Does Clay do well with his looping session?

Zack shares his phone number with both the girls and agrees to go to prom with them besides agreeing to fulfill some other requests. The teens make fun of them stating a reference from Golden Girls and Reed gets amazed yet again by their knowledge of these old shows. Meanwhile, Selma (Rose Abdoo) follows Bree outside the writer’s room and describes her own experiences of working as the only female writer in a sexist environment and standing her own ground, since she loved the job. She advises Bree to be less uptight and to be considered serious in the group.

Bree shares an idea that impresses the entire writer’s room, who starts pitching in their connecting thoughts to her idea. It grows into something worth taking into the script and the writers add the idea to the whiteboard. This achievement makes Bree feel giddy and elated. Meanwhile, on the set, when Gordon’s aggressive approach doesn’t work, Clay shares saying these lines in the past being drunk. Being a part of AA, he is not supposed to drink now and work the way he used to.

With his instinctive approach, Gordon goes on to hug Clay with affection and say the line. This time, the actor says it without a single mistake. They realize the lack of affection is the barrier to him not being able to do his work right. The whole moment ends up being exceptionally compassionate without letting the dramatic tonality create a jarring shift from the comic writing.

Where to watch Reboot

8:37 Rebirth (2022) Review - A sagacious look at trauma and the ramifications of a single moment of violence