Home»Reviews»Film Festivals»One and Four [2022]: ‘NYAFF’ Review – Defying the Perception of absolute truth and the fallacy of its adequacy
Film Festivals/NYAFF/Reviews

One and Four [2022]: ‘NYAFF’ Review – Defying the Perception of absolute truth and the fallacy of its adequacy

Here comes another gorgeous film based on the Rashomon effect. ‘One and Four’s tightly wound narrative brings out Kurosawa’s timeless cinematic invention. There is a debate about Orson Welles doing it with Citizen Kane before him because we are on the issue. But what really matters is how beautifully Tibetian filmmaker Jigme Trinley, in his directorial debut, connives with the daunting and unyielding terrain of his locations to integrate complex ideas about the conflict between nature and humans.

It is almost a single-location film – Sanggye’s mountain cabin. Sanggye is a forestry official posted to man the designated area. ‘One and Four’ takes place over the course of a single day. Three different men and an animal come to visit him as he vies with the reality of things. It would be too straightforward to call the film a psychological prison. These elements are strongly seen across the different acts but do not have a tidal influence on what Trinley intends to do. Along with the strangeness of the uncertain, Trinley also uses the facetious nature of human speech. Manipulation elevates the appeal of the story that relies heavily on the viewer accepting Sanggye’s fate. It is ‘One and Four’s backbone. And the foundation of its plot.

Related to One and Four – Special Delivery [2022]: ‘Fantasia’ Review – A Thrilling, Emotional Ride That Checks All The Boxes

The snow-covered forests and mountains become the perfect secluded setting for Trinley to stage the drama. From the get-go, his film is a walking collection of contradictions and conflicts. All of Trinley’s main men share an air of mutual distrust among them, which is indeed the driving force. The various technical elements of ‘One and Four’ string together an erratic tone that is slightly leaning more towards an experiment rather than a fully formed feature. They prove to be engaging nonetheless. When the very first bricks of the story are laid, you as a viewer prepare yourself to experience the expected. We do not get any sudden detours of social or political commentaries. In fact, one of the highlights of the film is how craftily Trinley is able to trust his visual storytelling abilities over the tendency to change tactics. 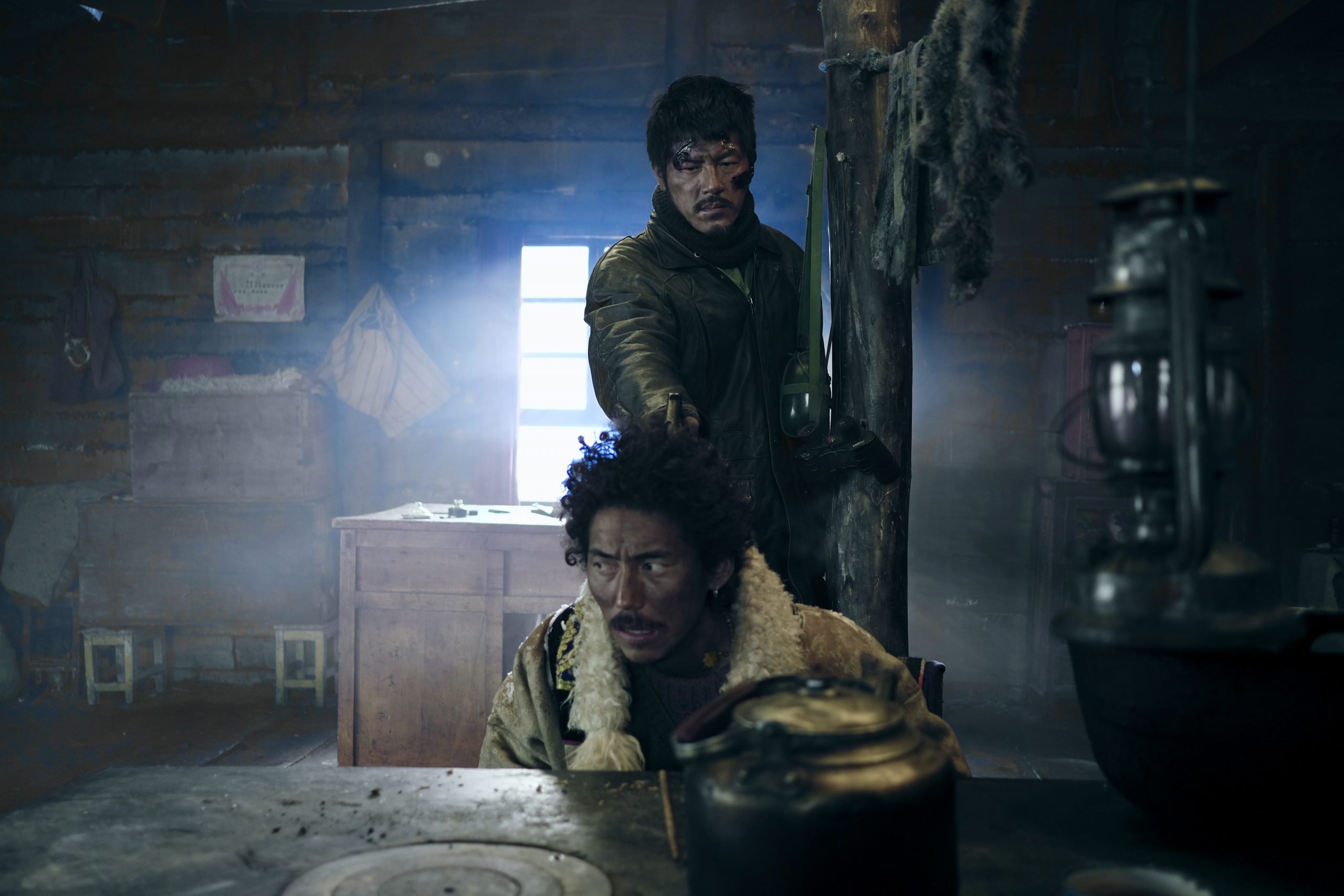 The horror-dystopian tinge that we feel due to the excellent camerawork wanes gradually as the plot becomes clearer. Not in terms of form; but conception and ideas. The surrealism is replaced by a more palpable, frightening replication of a Mexican standoff – but with four men. Sanggye acts as the neutral voice that guides us as much as it confuses us. The more we know, the less we understand. But being farther away from the truth is actually a fruitful exercise here. Not knowing the exact chain of events does not indicate being inadequate in this case. It is a proposition that you must relish and enjoy as a viewer. There are marked similarities to some great works like Tarantino’s ‘The Hateful Eight’ and Kurosawa’s ‘Rashomon’ but Trinley cannot be accused of copying their styles. Such is the ubiquity of their vision that remnants of it do find their way into Trinley’s narrative.

The challenge for Trinley is to fulfill the requirement of substance that facilitates thematic musings and exposition. He comes up short in trying to make that happen. It is not for the lack of trying but the nature of his creative choices is such that taking steps to tick that box would have derailed what he already had in the narrative. The only spark that he can ignite is the man vs. wild war. Seeing the gory images of the deer without its antlers and the animal walking into his house in the climax really evokes a lot of emotion. It takes a considerable toll on you getting to see wildlife in such a vulnerable state. ‘One and Four’ is definitely a contender and should be on your radar if you are out looking for an eerie experience from exciting, new faces.

Special Delivery [2022]: 'Fantasia' Review - A Thrilling, Emotional Ride That Checks All The Boxes

One and Four [2022]: ‘NYAFF’ Review – Defying the Perception of absolute truth and the fallacy of its adequacy