Only Murders in The Building (Season 2), Episodes 1 & 2 Recap and Ending Explained: Season one of Hulu’s Only Murders in The Building ended with the murder of Bunny Folger, a bloodied Mabel (#BloodyMabel), and the unlikely podcast trio (Mabel Mora, Oliver Putnam, Charles Savage) being shepherded away from the Arconia to the local precinct. There was also the promise of a true-crime podcast (this fall) covering their brush with the law.

We got a sequel way before fall, and it has elements of the same whodunit that made season 1 intriguing.

The episode offers us an explanation of who sent the protagonists the message (“Get out of the building now.”) in the climax of the Season 1 finale ‘Open and Shut’.

It kicks off with a monologue from Steve Martin’s Charles Haden-Savage and the song ‘I Love New York’. This sequence of perceived grandeur cuts to the interrogation room where Savage, Mabel Mora (Selena Gomez), and Oliver Putnam (Martin Short) are being interrogated as Persons of Interest. Even though they aren’t looking good in the eyes of the law, Mabel retains her sassiness and uses it on the interrogator. Meanwhile, Martin Short continues to crave the spotlight and expresses disgust at not being featured on the front page of the morning dailies. His craving for attention leads him to exclaim in delight when he learns he is a person of interest.

The trio is discouraged from continuing on their podcast and Mabel seeks to be boring for once. She wants to have meaning away from the murders.

While they try to move on, the newfound fame grants opportunities to the septuagenarians but subtle reminders show that Savage must stay out of jail to avail of them. Hence, he leaps on board and joins the ever-ready Putnam, who has had a very interesting interaction with a new neighbor (Amy Schumer as herself). Meanwhile, Mabel discovers herself at an art gallery and meets a new friend Alice (Cara Delevingne) who doesn’t quite tell her that she isn’t joining a cult.

Although they tried to move on, a rival podcast (Tina Fey’s show) still positions them as guilty in the court of public opinion. Hence, Mora, Savage, and Putman know that it is imperative for them to test their amateur sleuth skills and find something to clear their name. Clearing their names would be a tad tough, as the latter had been quite communicative about his dislike for the previous building manager.

“Say it, forget it, write it, regret it”

They want to search Folger’s apartment, but the only way through is via a vent through Mabel’s house. The sound of ‘Bunny’ gets them through the small space where audiences get introduced to Mrs. Gambolini, i.e. a talking parrot that picked up a lot of cues from its late owner.

While in the apartment, they learn about a missing painting, a secret lift, and a coverup to kill two birds with one stone. (secure the paintings, discredit the sleuths) They also learn that Tim Kono’s murder wasn’t the only planned one and someone is still playing around with them.

Besides this, episode one has throwbacks to the pilot interaction. It also provides explanations about sophomore seasons; especially in the true-crime podcast genre. A rarity indeed, but if this show proceeds in this way, Cinda Canning’s take on the Arconia Murder could work in tandem with the Only Murders in the Building podcast. One about the murderers and the other about the murders in the building. 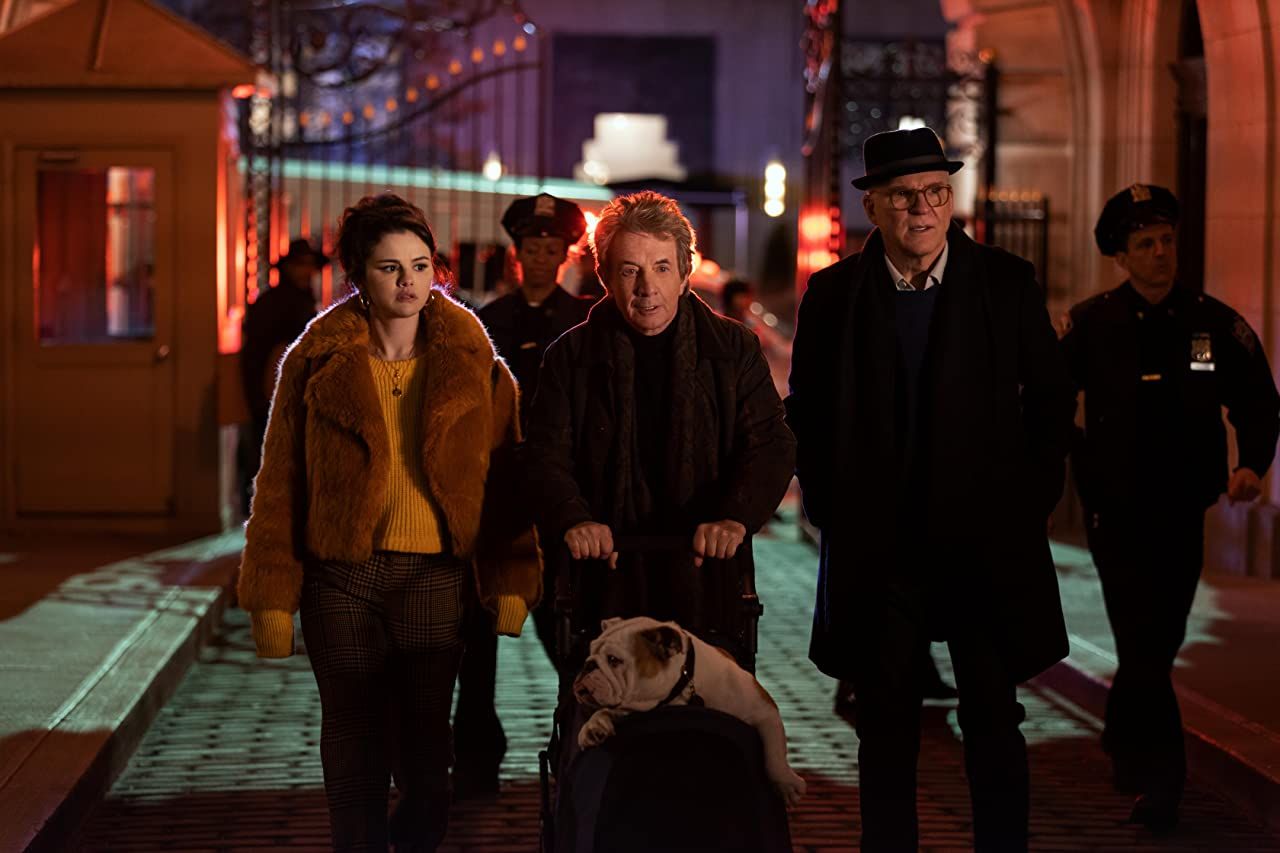 ‘Framed’ kicks off with an explanation about the secret lift and a glimpse into rather surprising backstories that will undoubtedly unravel over the course of the season. Mabel slowly remembers the events of the fateful night of Bunny’s murder, and the deceased individual’s words keep popping up. One word line helps the trio draw a connection that she was being pressured for that particular painting that has mysteriously turned up at Haden-Savage’s apartment.

They decide to get the painting back where it belongs and use the wake as an opportunity to carry out their plan. This event pushes along the fact that podcasters are sniffing around for information about the Only Murders in The Building podcast hosts. Here, audiences learn of The Arconia’s new Board President, and that Bunny’s mother Lenora (Shirley MacLaine) will play a major role over the upcoming eight episodes. She sniffs (yes; you read that correctly) the trio and clears them of any wrongdoing.

Even though Mabel and Oliver seem thrilled at having improved in their second season, part of the plan goes awry and they need to improvise. Through this scene and two more towards the end of the episode, we learn that there are duplicate paintings.

Amy Schumer and Oliver Putnam continue their discussion from the season premiere and discuss the point of view from which they would present a TV version of Only Murders in The Building.

Mabel visits Alice at the art studio and accepts her invitation to destroy a sculpture, following which she comes out.

Only Murders in The Building (Season 2), Episode 2 “Framed” Ending Explained

From the first two episodes (particularly the final interaction between Savage and Mrs. Folger), it is clear that after Season 1 focused on Mabel’s backstory, this season will focus on Charles Haden-Savage with ‘OliMabel’ slotting in as the supporting characters.

All signs point toward someone being out there to frame him. Given the equation between Charles’ father and Bunny’s mother and what happened to Bunny, it could be a scorned someone. The painter’s disappearance resulting in a windfall and the makers opting to show Mrs. Folger’s poor skills with the knife during the wake can open a door to the old lady being the killer.

‘Framed’ shows the aftermath of someone toying around with the leads. A question that emerges from this episode is- How does someone enter another one’s apartment with such ease?

The missing painting mysteriously appears at Savage’s apartment. We soon learn that there are duplicates of the same with Amy Schumer not wanting one if it isn’t the original.

Audiences also understand that the Arconia is a building akin to Celebrity Big Brother. The elevator explanation at the start could just be the tip of the iceberg, with more such secret pathways (peepholes) existing.

Amy Schumer could be positioning herself as the big bad. It could be the red herring (the show is famous for them), but the vibes she gives in episode 2 and the bassoon player history clearly provide enough food for thought here.

It is unknown how Alice will get involved with the Arconia storyline. We even don’t know whether she will be part of it, but it’s good to see Mabel have someone her own age to hang out with.

Mrs. Gambolini’s “I know who did it” was the last dialogue of ‘Framed’. It may be a tad straightforward for the bird to directly provide a clue to the mystery, but a cue towards giving the podcasters something to use their gray cells on in episode 3 is a possibility. The “who did it” is vague as the “it” could mean anything possible and not necessarily the murder or the painting robbery. It could even be a Bunny Folger line that Mrs. Gambolini picked up.

Tying all this in with the note Putnam found towards the end of episode one, and the words Bunny said to Mabel, we can proceed with the assumption that “that painting” was never a doubt. Bunny’s “Savage” is somewhat clearer now, but “14” remains a mystery; one we don’t think Mrs. Gambolini can help crack. However, if the bird does know something, it will be very interesting to see what path they take next.

Like the pilot promised, the show continues to treat a mystery akin to an onion. It will allow audiences to peel it apart layer by layer. Perhaps that is how Mabel’s memory of the night of Bunny’s murder will get restored. In two episodes, we have gone from nothing was said to “14” and “Savage.” What could be next?

Only Murders in The Building (Season 2), Episodes 1 & 2 are now streaming on Disney+Hotstar