Michael Apted’s Thunderheart (1992) is a glossy yet captivating Hollywood production to deal with the plight of Native Americans, relocated to reservations in the American wilderness and burdened forever with the disadvantage of social isolation, poverty, homelessness, and alcoholism. Although in theory the indigenous communities are treated as sovereign territories within the United States, managed by a tribal government that supposedly offers the persecuted race dignity and freedom, in reality, the nation-state absolutely dominates the Natives unmooring their cultural values and imposing upon them the malevolent environmental and social practices. Under the cloak of murder/mystery, Thunderheart investigates the Native Americans’ perpetual struggle to preserve their traditional values and natural resources.

Thunderheart is inspired by real events: the death of two FBI agents in June 1975, the consequent clampdown on the American Indian Movement (AIM) by the US government, and the 57 unsolved murders in the Pine Ridge Indian Reservation. In the late 1960s, a Native American grassroots organization – AIM- emerged to speak about the issues of systemic corruption, poverty, and police brutality impacting the North American indigenous communities. In the last week of February 1973, AIM staged an occupation protest against corruption in local tribal government in the town of Wounded Knee in Pine Ridge Reservation. It lasted till the first week of May 1973- for 71 days. The siege ended with the death of two Sioux men – shot by federal agents. The gunfights also injured a federal agent, paralyzing him. White House promised the surrendered AIM members that they would look into their complaints. However, the systemic violence within the reservation only increased. 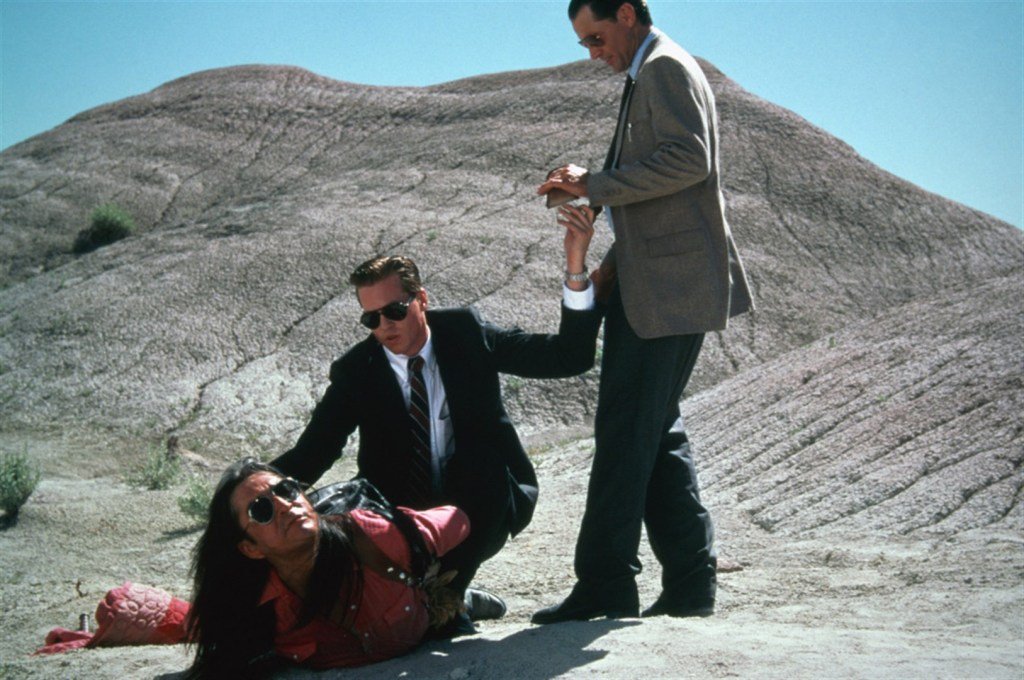 What followed was the shootout and murder of two FBI agents (in June 26, 1975) which led to the capture of AIM member Leonard Peltier. He was convicted for the murders although it’s widely believed that it’s a classic case of miscarriage of justice. Now considered a political prisoner, Mr. Peltier is behind bars for more than 45 years. The British film-maker Michael Apted, known for his land-mark ‘7 Up’ documentary series, made a strong case against FBI on how it tampered with evidence in order to build a case against Leonard Peltier. Apted also thought-provokingly examines all the violent events and systemic oppression that led to the shootout between FBI agents and Native Americans in June 1975.

Titled Incident at Ogala (1992) and narrated by Robert Redford, the documentary is a perfect companion piece to Thunderheart which touches upon the aforementioned events within a dramatic set-up. Mr. Apted is an extraordinarily versatile film-maker who is adept at documentary-filmmaking and also comfortable with genre films. Some of his best feature-films in Hollywood include Coal Miner’s Daughter (1980), Gorky Park (1983), Gorillas in the Mist (1988), and Amazing Grace (2006). Written by John Fusco and photographed by Roger Deakins, Apted puts his supreme directorial skills to use in Thunderheart without diluting the narrative’s deep political overtones.

The film opens with young FBI agent, Ray Lavoi (Val Kilmer) being sent to Sioux lands of South Dakota to investigate a murder on the reservation. He is sent there solely because of his ethnicity. Lavoi is one-quarter Ogala Sioux. His half-blood alcoholic Native American father perished when Lavoi was only seven. His stepfather is a colonel. Ray has never had any interest in his Native-American heritage. Yet under the pretense of sending ‘one of their own men’, he is to work with a seasoned FBI agent, Frank Coutelle (Sam Shepard). It’s clearly a political move to muffle the cries of the members of radical ARM (a play on the real ‘AIM’).

But of course, ARM, Coutelle, and Lavoi himself know that he’s just there as a symbol, not to do any real investigation. Frank Coutelle takes the rookie FBI agent – with the background in deep undercover experience – on a tour through the reservation, pointing out: “Look at this, we got the Third World to smack dab in the heart of America. Hard to believe, huh? It used to be all theirs, clear on up into Canada. This is what they got left with.” Initially, Ray is indifferent like every other FBI agent in the job, and Coutelle suggests that the murder is only the result of an internecine struggle between two rival factions of the Sioux: the traditionalists vs the ones consorting with authorities to reap the benefits of the American dream. A swaggering, gun-toting group of native vigilantes, led by Jack Milton (Fred Ward), these men have bestowed themselves an intimidating acronym – GOONS (Guardians of Ogala Nation).

Though classified as dangerous, only two of ARM’s (Aboriginal Rights Movement) members in the reservation are alive and well: a school-teacher named Maggie Eagle Bear (Sheila Tousey) and the politically savvy Jimmy Looks Twice (John Trudell). A traditional leader known as Grandpa Sam Reaches (Chief Ted Thin Elk) remains as the spiritual leader of the movement. The nonchalant Coutelle pins the murder on Jimmy Looks Twice even though it’s plain to Ray that his seasoned partner’s conclusions don’t fit with the evidence they have. Ray receives more clues to the murder case from the no-nonsense local tribal police chief, Walter Crow Horse (Graham Greene). 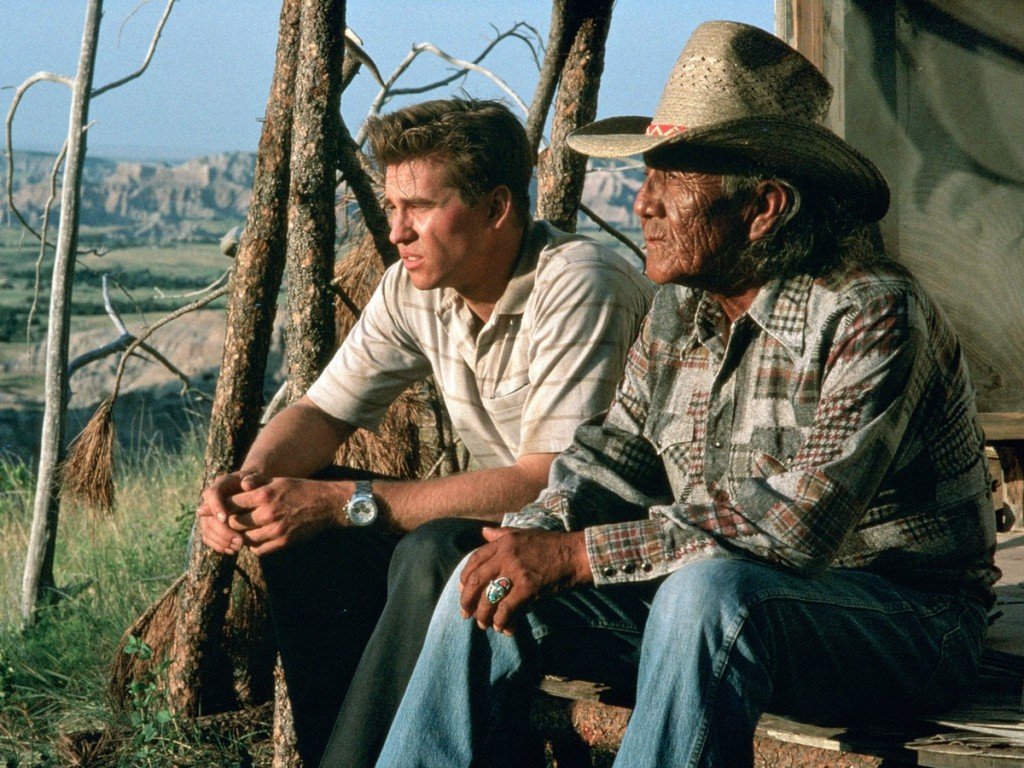 Ray Lavoi and Walter are the perfect opposites, but as Ray understands the real politics in play they overcome their differences to solve the case. Ray also forms unusual alliances with the teacher Maggie and Grandpa Sam Reaches. Through these interactions, Ray Lavoi sheds his confused feelings about his Sioux heritage and begins to embrace that identity to win over the corrupt whites.

Despite a superficial ending that cloyingly emphasizes the triumph of righteousness, Thunderheart for the most part effectively blends the two ‘journeys’ Ray Lavoi makes: one is the overt pursuit of truth regarding the murder, and the other is a spiritual journey to his roots. As he becomes more spiritually aware of his people’s struggles, the politics becomes easy to understand. He learns that it’s always about power, and killing the truth. Moreover, Jimmy says, “We choose the right to be who we are. We know the difference between the reality of freedom and the illusion of freedom. There is a way to live with the earth and away not to live with the earth. We choose the way of earth. It’s about power, Ray.”

Although John Milton’s goons and the ARM members bring up the familiar, old-fashioned dichotomy of ‘good-Indian, bad Indian, Fusco’s script zeroes-in on the institutional abuse and exploitation (aka white power structure). Apted and Fusco provide an insightful and empathetic view of the Native American existence. Their distinctive sense of humor and respect for traditions and rituals is explored more than the usual portrayals of their impoverishment. Grandpa Sam Reaches and Walter Crow Horse is rich, fleshed-out characters whose sense of humor and humanism pushes Ray to accept his real identity. Both Graham Greene and Chief Ted Thin Elk offer scene-stealing supporting performances.

Overall, Thunderheart (119 minutes) takes a poignant and thoughtful look at the struggles of the Native American community who are systematically held hostage by their white conquerors.