Slow Horses (Season 1) Episode 3 – Explained and Analysed: This is the pivotal episode, the moment where false operations come home to roost and completely disrupt all well-laid plans.

Slow Horses Episode 3 is the table-setter episode, where necessary bits of information are going to be revealed about the plot providing clarity to the protagonists along with the audience. That runs the risk of sidelining the main protagonist of the previous episodes at points which is exactly what happens with Cartwright’s character, as he is put on the backburner, and Jackson Lamb gets the much-needed spotlight.

The case of the hooded thug

Good thing for the show as well as the audience as Gary Oldman’s Jackson Lamb is an acerbic firecracker of a character. He rescues Cartwright from the prison holding near the hospital and berates him for revealing his identity as an MI5 agent when calling in the ambulance. It is heavily implied that Second Office is behind Cartwright’s temporary imprisonment. As they leave, MI5 “dogs” show up and reveal to the home office that Cartwright is gone. In the car Lamb debriefs Cartwright asking him about their appearance that night at Hobden’s. Cartwright vaguely replies that Hobden has something important for Regent Park, and he might be connected to the kidnappers. Then the topic shifts to Sid where Cartwright confronts Lamb about Sid being hired to shadow him. Lamb bites back in the traditionally sarcastic tone tinged with cruelty. When asked by Lamb as to who shot Sid, Cartwright deduces that the man was wearing tactical gear and a balaclava, and it felt like he was trying to channel the vibe of the MI5 dogs, but according to Cartwright, “something felt off”, and because he didn’t speak the whole time, River concludes that the attacker would be worried his voice might be recognized.

Meanwhile, the episode had opened with Louise and Min drinking at the bar together. These were two of the least developed characters in the prior episodes, so it felt good to see these characters get ample amount of screentime, as they drunkenly return to Slough House, fool around with opening the door, leading to them fooling around at the stairs until they hear a noise emanating from Lamb’s office. Curious whether it’s mice infestation or something else, the pair head upstairs and while overturning the office get blindsided by a hooded thug. Min struggles with the thug leading to them both falling down the stairs and the thug breaking his neck due to the fall. Louise opens the mask covering the thug’s face revealing it to be Jackson Moody. 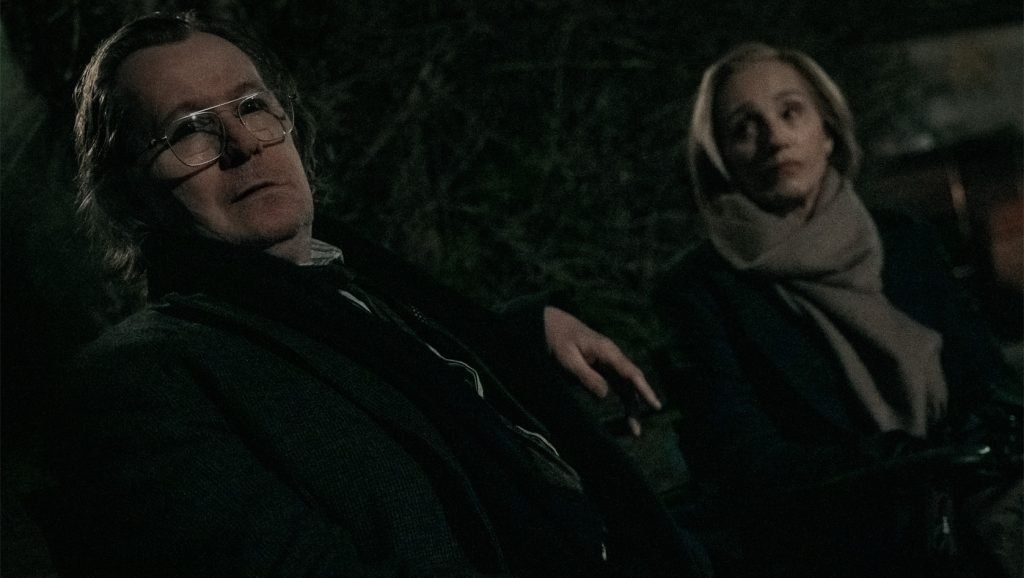 As Lamb and Cartwright return to Slough House, they come face to face with the scene of the tussle. Lamb’s cold calculated reconstructing of the events and asking questions to Min, all with the traditional droll British humour intact is just great writing here. On examining Moody’s pockets, he comes across an envelope with cash or “flight money, two mobile phones and the bugs which he had planted in Lamb’s office. Lamb deduces that he was “cleaning up”. He calls the lone number on one of Moody’s phones which turns out to be Diana, whereby he proclaims to her “We need to talk”.

Lamb meets Diana out by the canals, where he confronts her about Sid Baker’s current fate, her identity as Diana’s mole in Slough House, and how she was shot by Jed Moody, another one of her recruits. In response, Diana tries to pull rank on Lamb, to which Lamb derisively reveals Moody is dead, due to his shoelaces being untied which led to a tumble down the stairs. Lamb then reveals that logically he could call the police, because there is an accidental death at the office, or he could call in the dogs. Diana then reveals that this entire operation was a plan to neutralize the nationalists all under Greg Simmonds. The scheme is to indirectly hire a neo-fascist group to kidnap a Muslim kid and threaten to dismember his head on social media live. Except that won’t happen because her agents are working with the Sons of Albion on the inside, ready to blow the operation wide open. Hobden had overheard Diana telling the details of her plan to her brother at the Frontline Club, so the entire chain of events regarding Hobden is to stop him from revealing it to his peers among the nationalists, especially the MP Peter Judd. What makes Diana Taverner’s plan even more devilish is her target Hasan Ahmed, who isn’t a random Muslim stand up comedian. He is the nephew of the Pakistani agent Mahmud Gul. She plans to orchestrate events that would undermine the nationalist movement among the public populace, and by rescuing Hasan she also hopes to improve the relationship between British and Pakistani intelligence.

It is a positively diabolical plan which forces Hobden to panic and rush to MP Peter Judd’s office, trying to warn him of a potential media storm in case Hasan is murdered within 4 hours. Irritated by Hobden’s panicky presence, the pair come to a loud discussion which results in Hobden getting a fist to the face by Judd and being told to leave. But Judd is still visibly worried because of MI5’s involvement in the operation. Diana makes a deal with Lamb to keep all this information a secret and rescue Hasan from the kidnappers. In return, Lamb wants the Standish file which reveals his involvement with Standish’s husband, and his agents being fireproof, affectionately calling his agents “my losers”.

Its elaborate plan for Diana is at the risk of completely falling apart because it is resting on a foundation of coincidences and events none could have foreseen. The first is Hasan trying to escape by pulling the wooden bars from the walls of his basement. When that fails, his captors bring him topside and tie him up to the chair, gagging his face. Meanwhile, Lamb approaches the hideout along with Louisa, Min and Cartwright. The second unforeseen incident is one of the kidnappers Curly, getting irritated and suspicious of Moe, the leader of the pack. Irritated because of Moe’s belligerency, suspicious because of the lack of demand of a ransom for the kidnapping, as it would mean that the end goal would be to kill Hasan, but Moe’s cautious nature about it casts aspersions on his legitimacy in the group. All these compounds in a sudden and violent turn when Curly suddenly pulls up an axe and swings it with intent to murder. As Jackson and his team enter the building, they find the walls of the room smeared with blood, and Moe’s decapitated head on the table. Hasan and all the other kidnappers have disappeared, leaving the whole MI5 plan in jeopardy. The plot thickens.

Episode 3 of Slow Horses is an important episode with a lot less action but a lot more moving of the different plot threads resulting in a far clearer picture. The balance between the humor and the espionage aspect strikes just right, thus solidifying the uniqueness of the show in terms of tone and story.