The Post (2017) is one of those all-American, ambitiously political movies that swiftly represents the past to reflect upon on the aggravating present. It’s cry for the freedom-of-the-press is intended to deeply resonate in the hapless Trump-era. Yeah, the narrative is at times remains on-the-nose with its blustering message in civics. But it’s hard to resist the inherent charm of the movie, especially when Steven Spielberg is in complete control of the material and when historical figures are incredibly humanized by the ingenious ensemble cast.  The Post first originated in the form of spec script, written by 31 year old Liz Hannah, chronicling the idealistic stand of Washington Post publisher Katharine Graham and executive editor Ben Bradlee in their historical decision to publish the Pentagon Papers. Famous producer and former Sony Chief Amy Pascal got hold of the script and handed it to Spielberg, who brought upon the best possible actors to play the central characters. Advisedly, Josh Singer — the Oscar-winning writer of Spotlight – was also brought on-board to fine-tune the script, and so within a year the spec script was rapidly transformed into a multiple-Oscar nominated feature. 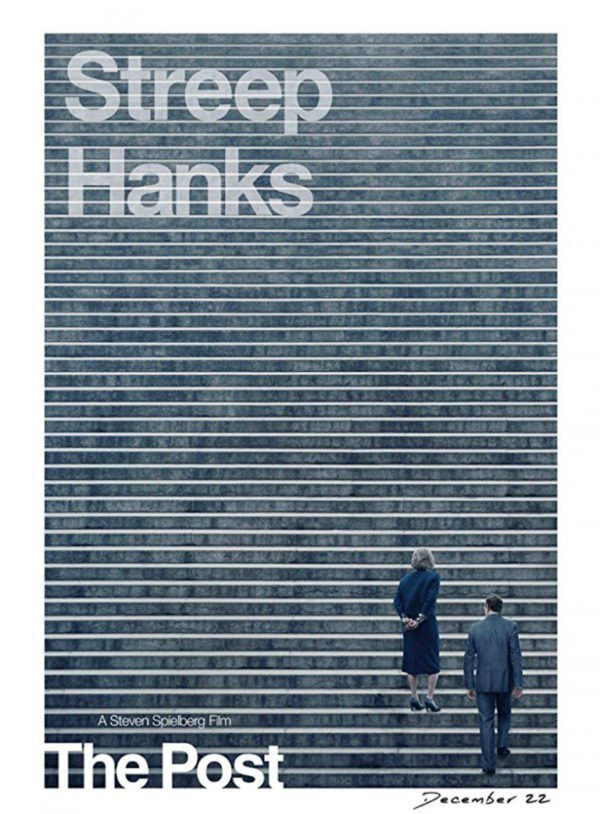 The 1971 release of Pentagon Papers — the 47-volume Department of Defense (DoD) study on the Vietnam War – was a pivotal moment in American democracy. It exposed the extent of lies spun around by the top government officials on the extending war campaign in Vietnam. Of course, the story was first scooped out by New York Times, to the dismay of Washington Post’s editor-in-chief Bradlee (Tom Hanks). At this time, the modest-sized paper was contending for national prominence, as its owner & publisher Katharine Graham (Meryl Streep) decided to take the Post public. Katharine, the wealthy social matron with no real business experience whatsoever, inherited her current top position, after the suicide of her influential husband Philip (in 1963), to whom Katharine’s father actually entrusted the paper. Ignored or belittled by her army of male business associates, Ms. Graham was considered not to be up to the job. But the Pentagon Papers debacle brought the best qualities out of her. Quite soon after the New York Times story on the deceptive Vietnam War policy, the Nixon administration got a federal judge to bar the Times from further publishing the leaked documents, threatening with charges of felony and treason.

The Pentagon Papers was leaked by Daniel Ellsberg (Matthew Rhys), a United States military analyst who was employed by the RAND Corporation, to assess the war strategies in Southeast Asia. When ‘Times’ was pushed back by Nixon, Bradlee with a help of determined reporter Ben Bagdikian (Bob Odenkirk) gets hold of Ellsberg (he was Times’ source too) and gains access to loads of unpublished secret documents. However, there was a dilemma to whether publish it or not, since the legal intricacies could risk the paper’s future and land Bradlee and Graham in prison with felony charges. As the clock ticks over, the small group of dogged reporters shuffles through Ellsberg’s out-of-order papers, in the hope of preserving the America’s time-honored belief in free press. The Post is mostly concerned with the 15 day period between Times’ story and Bradlee-Graham team’s challenging of Nixon’s unconstitutional court order. In fact, a huge chunk of the story takes place within a day, as cantankerous reporters, resilient editors, glowering business associates, and nervous lawyers brood upon the real cost of standing up for democracy.

The foremost strength of the movie is Spielberg’s positively infectious fascination for recalcitrant journalism. He adeptly ekes out a puzzling thriller out of impromptu conferences in darkly lit rooms, ringing telephones, teeming newsrooms, and overlapping dialogues. As usual, Spielberg and Dp Janusz Kaminski perfectly know when to push and capture the urgency in a moment and when to stay afloat in order to provide due emotional space for the star actors. Kaminski’s camera oft zooms on to the conduits of information providers – the payphones, pneumatic tubes, photocopiers, etc – with utter reverence. At one moment, the camera hurtles toward the box carrying the Pentagon Papers, as if it was the Holy Grail. Such visual approaches do boast the danger of turning into an overt mythologization of real history. Nevertheless, Spielberg evokes considerable nuance in depicting the psychological conflicts of the characters. Despite the array of grandstanding techniques, Spielberg subtly humanizes the characters – an approach he used for his historical characters in Lincoln & Bridge of Spies – and in turn circuitously elevates their heroic qualities. The writers Hannah & Singer cooks up scenarios that constantly question the tidiness of the characterizations. Bradlee recalls his famous friendship with John F. Kennedy and Jackie Kennedy, while Katharine Graham mulls over her friendship with former Defense Secretary Robert McNamara (played by a fantastic Bruce Greenwood) and Lyndon Johnson. In the end, the Pentagon Papers debacle is as much about freedom of the press as these two well-heeled personalities of journalistic world understanding the inappropriateness of their closer proximity to men in power — a universal lesson that’s more timely than ever. 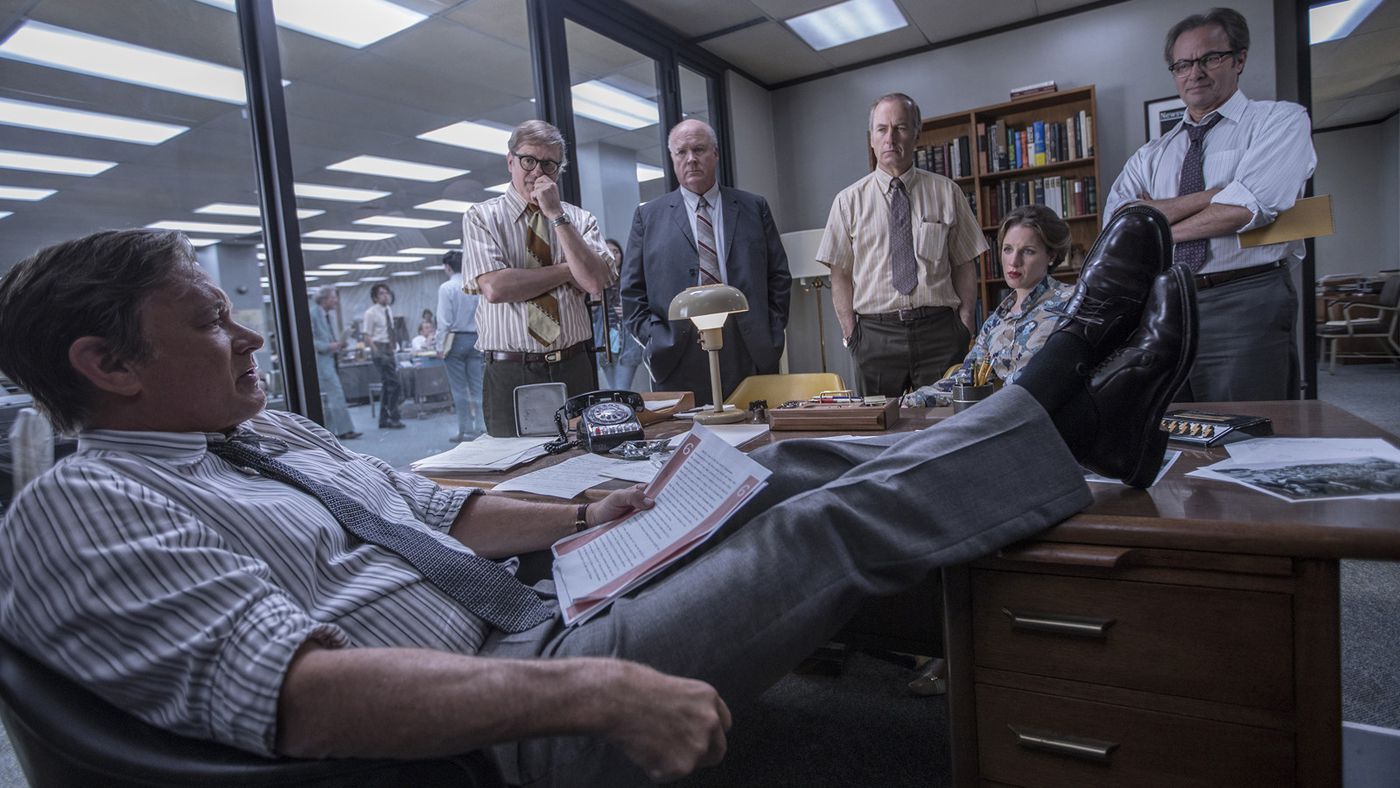 “We have to be the check on their power. If we don’t hold them accountable, who will?”, says the firebrand Bradlee, which is one of the many scenes in the film that overtly tries to pass a message to the contemporary American public and press. Some comes off as overkill, while some are nuanced enough to make an impact. One such interesting moment is the wordless shot of Ms. Graham descending the steps of the Supreme Court after the hearing, while a group of young women watch her with adoration; suddenly her courageous stand becomes pivotal part of the history that carries the promise to subsequently influence the pioneering women’s ascension in the men’s world. That scene worked far better than the previous ceremoniously mushy exchange between Graham and an undermined female court worker. The whole narrative trajectory focusing on Katharine Graham’s travails as a women vying for the respect she deserves is very well fleshed-out. And, Meryl Streep plays the role with her customary aplomb. Her astute mannerisms — fluttering of hands, anxious glances, hesitant voice — engages us on a much deeper level, which otherwise would have turned the character into standard poster child of feminism. Similar to James Stewart-Frank Capra combination, Spielberg-Tom Hanks pair embodies the canonical American values of fairness and honor. Moreover, it’s always hard to say no to the Hanks’ infallible good-guy persona. Spielberg has also brought in slew of wonderful supporting actors for the smaller roles: Bob Odenkirk as a rebellious, old-fashioned reporter, Tracy Letts as Graham’s emboldening principal advisor, Michael Stuhlbarg, Jesse Plemons, Sarah Paulson, Carrie Coon, etc.

There is no arguing that Spielberg’s The Post (116 minutes) is a conventional Hollywood drama made for the award-seasons, and partially wrapped with self-congratulatory and sentimental flavor. Yet, eventually it remains as a well crafted and supremely performed meaningful entertainer, whose shortcomings don’t suppress the vibrancy of its message.