After a scene stealing introduction in last year’s Captain America: Civil War, Tom Holland’s Spiderman gets his own full-length feature.  The good news is that director Jon Watts has managed to create a film that is different from any of the previous Spidey outings as well as the ever-expanding slate of MCU titles. Spiderman is the youngest he’s ever been, and the small neighborhood high school environment he operates out of is more prominent than ever. It has repeatedly been said that this is a coming of age film, and it lives up to that claim with a fun ensemble of goofy characters, and an interesting personal arc for our hero.

Despite not getting into the details of an origin, this is very much Peter Parker at his most young and inexperienced stages, more clumsy than graceful and more impulsive than intelligent. Tom Holland is the youngest actor to portray Peter on the big screen and this results in him also being the most convincing yet. He gets plenty of room to flex Spidey’s expected one liners and witticisms and brings the right mix of smart yet socially awkward to Peter. It helps that he’s surrounded by an effortlessly charming supporting cast, each of whom gets their own moments to shine, especially refreshing is the new and cooler take on Aunt May. 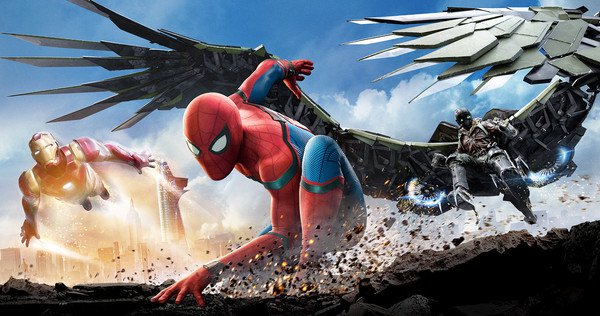 The film also benefits from one of Marvel’s best-written villains. Michael Keaton plays the Vulture with the right amount of motive and menace, you empathize with him and he makes all the lines land. There’s a scene towards the end of the film between him and Peter that’s terrific and involves both doing a lot of heavy lifting with just their eyes and expressions. It’s also an interesting plot development that this is the second film now, following Civil War where the villain is born of the consequences of events in earlier films. It adds a new dimension of believability and realism to the universe.

One of Homecoming’s biggest achievements is how funny it is, I honestly could not remember the last time I heard a cinema echo with such laughter. All the one liners, jokes and scenarios and with maximum effect. Also, don’t be surprised if the film makes you nostalgic for your own high school days. Downey Jr is expectedly competent and a neat addition. Both him and Jon Favreau’s Happy Hogan are used well in restraint and only when necessary so they can have most impact when present.

Related to Spiderman: All Spider-Man Movies Ranked From Worst to Best

Unfortunately, the films biggest shortcoming is the action sequences and spectacle. Sam Raimi revolutionized the superhero genre and his jaw dropping set pieces have aged well and still have more oomph than anything in this film. The Amazing Spiderman films, for all their flaws at least, had a couple of spectacular sequences that made for top notch IMAX 3D viewing. There is nothing of the sort in this film. This is not to say that any of the action is bad, it is cleanly choreographed and well-staged – just very underwhelming.

Spiderman Homecoming is a hilarious, well-acted, fast-paced and plotted action comedy that serves better as a coming of age high school story than as big screen superhero spectacle. While Michael Keaton’s villain is fantastic, the action sequences lack the edge and excitement that the rest of the film does. It is still an incredibly entertaining watch and another feather in the MCU’s ever growing cap that leaves you pumped for what lies ahead.