Tom McCarthy’s stupendous drama “Spotlight” (2015) opens and ends on the confined spaces of two different institutions – police and press. One silenced a crime, while the other stood alone to shine down its ‘spotlight’. Contemporary movies about journalists have often taken a cynical and audacious look at the profession. Tom McCarthy’s film offers a counter-argument for the worthiness of the investigative journalism; about how it could stand up against an entity that deems itself as ‘untouchable’. “Spotlight” reminds of us why effective journalism is a significant part of a healthy democracy. It asks tough questions on the mechanism of a powerful institution that abuses its followers’ faith, but at the same time it’s not the kind of film that takes on an insipid judgemental stand. There’s a torrential flow of humane moments in “Spotlight” that is so sincere and non-sentimental.

‘Spotlight’ is the four member investigative journalist team that operates with in Boston Globe, a leading daily newspaper for the state of Massachusetts. The film is set on 2001 as the Globe’s editor retires and is replaced by Mr. Marty Baron (Liev Schreiber) from Miami. He is the first Jew to be appointed at the masthead of a newspaper, whose user base is predominantly Catholic. Baron’s started his job with a simple question on a newsroom meeting: “What’s the follow up on priest Geoghan case?” Geoghan was accused of molesting more than 100 children in different parishes all over the country, including Boston, although a little was written about the case. Editor Ben Bradlee Jr. (John Slattery) doesn’t give a satisfactory answer to Baron and so requests ‘Spotlight’ editor Walter Robinson aka Robby (Micheal Keaton) to look into Geoghan case. Baron wants to go after the ‘Church’ system (manned by Cardinal Law) that has willfully ignored the abuses made by Geoghan and had kept on reassigning him. 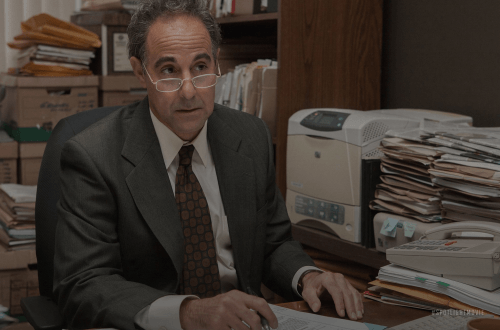 Apart from Boston-bred Robby, the ‘spotlight’ consists of tenacious enquirer Mike Rezendes (Mark Ruffalo), cool-headed and empathetic Sacha Pfeiffer (Rachel McAdams) and persistent researcher Matty Carroll (Brian d’Arcy James). While digging up on Geoghan, Mike remarks on the similar ‘Porter Case’ and a string of hidden abuse cases comes to light. Sexual abuse cases, which are either settled out of court or the intensity of its allegations, are kept under wraps, since many of the esteemed Boston people entwined with Church and Cardinal Law. Relentless investigation by ‘Spotlight’ showed that even the newspaper staffs of ‘Globe’ have ignored to print these cases in the past. The calm, unmarried Jewish outsider Mr. Baron and his motivated crew stand alone to wage a hard-to-win democratic fight against the most powerful institution in the city.

As an actor Tom McCarthy either plays a good-mannered or obnoxious American (his best role was playing as morally compromised journalist in the TV series “The Wire”). McCarthy is a far better writer/director, whose narratives repeatedly concentrates on the societal outcasts or people perceived as ‘quirky’. Apart from the disastrous “The Cobbler”, McCarthy weaved compelling stories. His directorial debut “The Station Agent” (2003) was about dispirited dwarf (played by ‘Game of Thrones’ fame Peter Dinklage) and a reclusive artist. “The Visitor” (2007) was about an alienated American and two illegal immigrants, living in his apartment. “Win Win” (2011) once again explored the human bond between two unlikely characters. With “Spotlight”, Mr. McCarthy uses his familiar outcast characters (Baron, Mitch Garabedian, Phil Saviano, etc) and offers his nuanced take on human relationships, but still the film has a central story that demands McCarthy to work on a large canvas than his previous films. And, the writer/director perfectly succeeds as he both focuses on the mechanics of vast investigations and also imbues an emotional urgency for the viewers to easily connect. 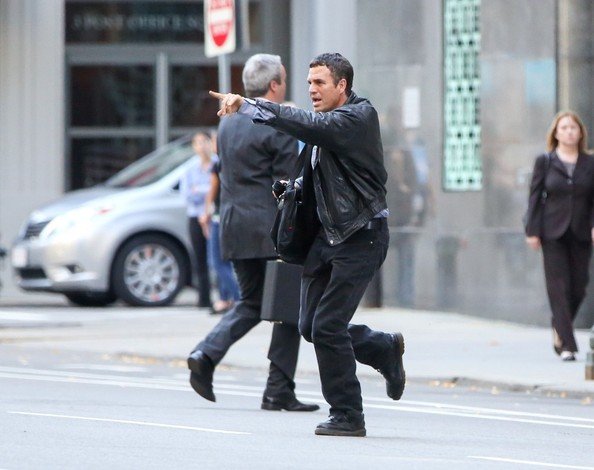 From the beginning of film in a police precinct to its end frame, where Robby says “This is Spotlight”, the script flows in an organic and nuanced manner. Within the brief opening sequence, Josh Singer & McCarthy sets up how everyone remains complicit by allowing the violator to go free (although this event never recalled later in the narrative). The script intimately follows each of the characters, moment by moment, and with revelations or casual conversations, we get more involved with the characters. WE get to how vulnerable as well as earnest they are in their pursuit for justice, without ever resorting to depict melodramatic subplots. The testimonies of the victims/survivors never shy away from the sordid details or hard-to-digest truth. In one devastating testimony sequence, a survivor painfully asks “How do you say no to God?” and goes onto conclude that “it’s not physical abuse, its spiritual abuse”.

Movies that are usually designated as ‘David vs Goliath’ drama tend to spend a lot of time on its characters and their backgrounds to forge a robust connection with our heart. “Spotlight’s” primary challenge is to showcase all the vivid, humongous details about the case and also to allow us to connect with those in pursuit of truth. A misstep in the script would either turn such a narrative into a sentimental, punching-the-air drama or a tedious docu-drama. Like a wire-walker, Singer &McCarthy elegantly walks through the investigative and the essential humane elements. Only through bits and pieces, we learn about the journalists’ life. Mike Rezendes’ troubles with the marriage life; Sacha’s emotional dilemma; Robby’s strong personal attachments to the city are subtly brooded upon and leaves for the viewers to understand each of their emotional investment on the case. Despite, the journalist achievements, there aren’t ostentatiously heroic dialogues. Mr. Baron eloquently states , towards the end: “Sometimes, it’s easy to forget that we spend most of our time, stumbling around the dark and when suddenly a light gets turned on, there’s fair share of blame to go around……..All of you have done some very good reporting here”. Baron doesn’t finish this statement by hugging his fellow journalists and proclaims ‘we have won’. He simply cautions them like an experienced man in the field “Catholic community are gonna have a strong response to this………I will need you back here Monday morning, focused and ready to your job”.

In fact, every character in the film is aware that their investigation isn’t about winning against a stubborn institution. Their chief aim is only to bring out the truth and keep on doing it, even after grand achievements. As a director, McCarthy refrains from framing a hagiography moments. He showcases the energy and desperation of the persons involved to bring out the truth (the courthouse running of Mike or Garabedien sitting among huge stack of files, always feeling that there’s a lot to do), but there’s no single frame that frames them as saviors. At different points in the film, the director subtly notes on how the case was a conflict between knowledge and faith (Sacha hears a priest commenting on internet “Knowledge is one thing. But faith is another” – hinting that faith, blind or not, will triumph). By each workman-like evocation, the director shows how knowledge could win over power & faith that runs amok. Although, it’s been only a decade-and-a-half, the journalists taking notes with pen and the presence of bulky mobile phones, makes it seem an era. The internet in the film looms over the far edges (there’s a billboard advertising AOL), and it all makes us wonder on the possibility of such gradual, dogged investigations in the print media. 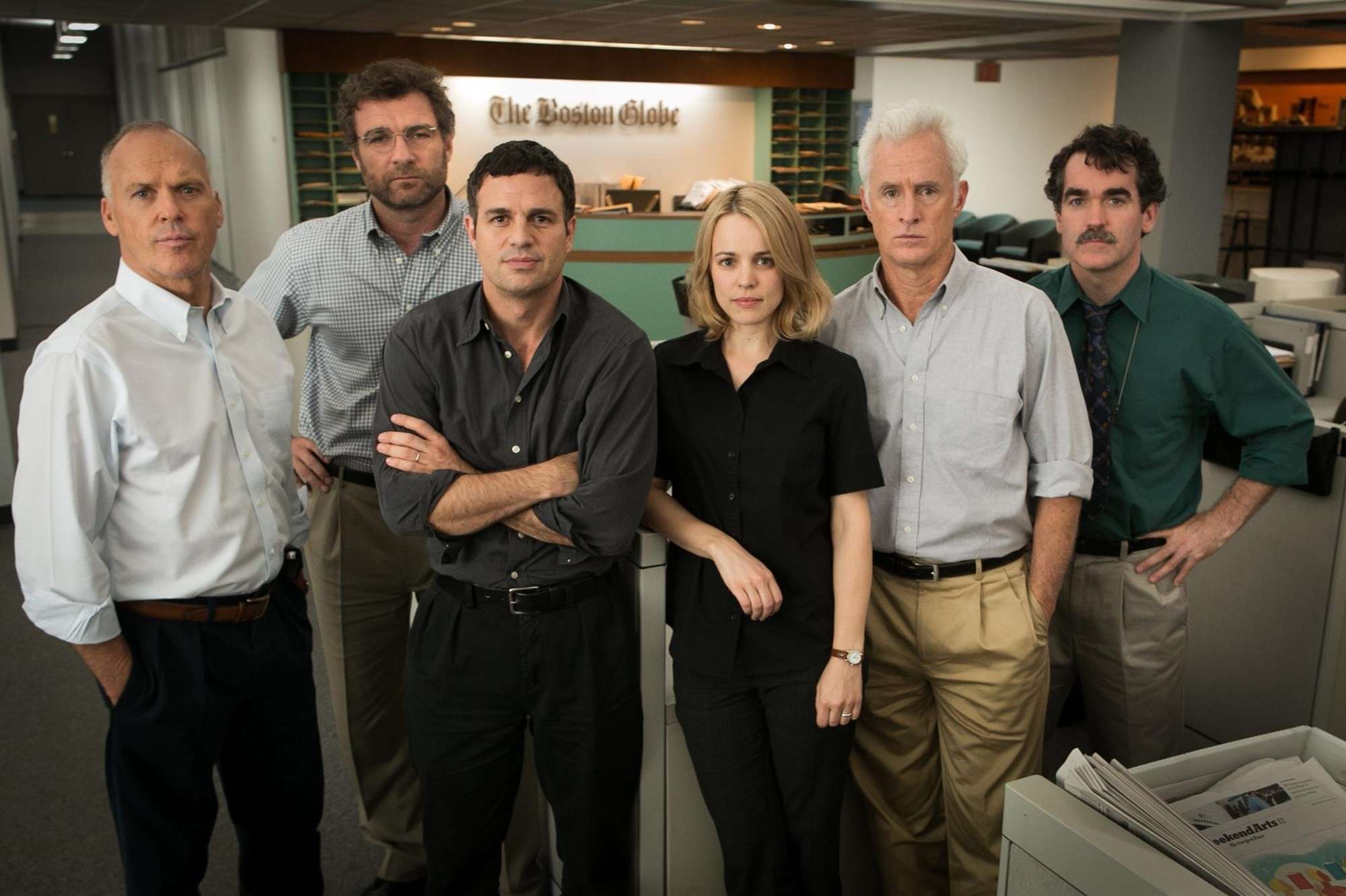 Tom McCarthy is essentially an actor’s director and it shows in each scenes of this ensemble piece. The great performances culminate at all of the film’s conversations. Watching Keaton, MacAdams, Ruffalo, Schreiber, Tucci converse with each other is as natural and splendid like viewing the confluence of great rivers. The exchanges between Tucci’s Garabedian and Ruffalo’s Rezendes are the most compelling sequences of the lot (both can truly bring a range of emotions with a simple twitch in the face). In spite of excellent writing, the emotional catharsis we derive in the end wouldn’t be possible if not for these seasoned performances.

“Spotlight” (128 minutes) is one of the best, solid dramas that exhibits the importance and value of justly done journalism. In the coming years ‘Spotlight’ would be often mentioned, when the topic of ‘Best films about Journalism’ gets discussed.