'The Commune' takes a wrecking spin on the idea of being together. It basically tells us how even being together can break people from the inside, where even smart people need to take a final decision.

Thomas Vinterberg, widely know for his critically acclaimed and emotionally quenching 2013 character drama ‘The Hunt’ takes us back to the early 70s delving into the house of colorful characters living together in a progressive thinking household officially tagged as being a part of a commune by the hearsay.

Erik (Ulrich Thomsen) has just recently acquired his father’s grand house in the middle of the suburb in Copenhagen. He wishes to sell it as it’s genuinely too big for a family of three. Anna (Trine Dyrholm), Erik’s wife and a well-known TV reporter, on the other hand, wishes to live in the house and is supported by her free-spirited daughter. She wishes to spices things up because life’s getting too boring for her. Which brings us to her suggestion of bringing more people into the house that they have just acquired instead of selling it off. The house soon gets filled with a varied number of characters who have their own personal thing to contribute. In togetherness and free-thinking all of them find a family that seems to have everything going right for them until it doesn’t. Hence, ‘The Commune’ takes a wrecking spin on the idea of being together. It basically tells us how being together can break people from the inside, where even smart people need to take a final decision.

The drama and character study that Vinterberg presents is precise and progressive in a way that it presents both sides of the coin. From taking skinny dips to burning furniture and unnecessity, Vinterberg knows how exactly a huge commune really works. Him being part of one in his early life must have definitely helped. So, he weaves a comedic, at times hilarious spin on the familiar household. Wherein he occasionally even critics over the conventional working of families that we are supposed to know or are a part of. 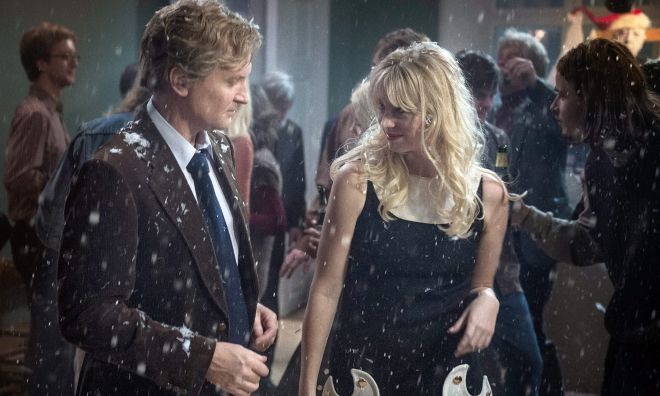 However, the narrative latches onto a very thinly written melodramatic oddity towards the last leg of the film, which, in spite of all its smartness, pushes ‘The Commune’ to becomes a little too messy. Like Trine Dyrholm’s frustrated protagonist who moves through a rough patch of delusion, self-doubt, paranoia and insanity, Vinterberg’s film motions into an orbit of thought-provoking, and emotionally resonant landscape that doesn’t really go with what has been previously set up.

Vinterberg’s direction, however, is astonishing. The way he juggles through the various characters towards the start alone makes for an essential viewing. Also, with a cast that outperforms everyone else, Trine Dyrholm completely nails it out of the park. The transitions in her body language, her perfectly lined make-ups, and her emotional decadence all come out so well that it somehow covers up the flaws in the narrative department.

Though ‘The Commune’ doesn’t really come close to Vinterberg’s The Hunt, it still proves to be a rather charming and thought-provoking feature that focuses on low-key emotional disbalances when compared to the earth-shattering turmoils seen in his previous feature.

A Death in the Gunj [2017]: A Brooding Atmospheric Mystery-Drama