Two months ago, when I reviewed Shooting the Mafia, I was so enchanted by Letizia Battaglia’s fight against the mafia and the suffering of the Italian people under their evil reign, and I was sure that Falcone and Borsellino’s legacy was going to live forever and that they would be remembered for the rest of times. The Mafia Is No Longer What It Used to Be was both a surprise and a disappointment, set 25 years after the brutal murder of the two Italian judges, it captures how an entire nation, whom they fought and died for, is forgetful and ungrateful of their noble sacrifices, and it shows the pretentious and feeble way in which they are remembered, a celebration of a freedom they struggled for and a denial of those who provided it. The Mafia Is No Longer What It Used to Be, it is all but dead, but here it takes a new form that is both unbeatable and widespread. The mafia is now what was once the victim.

“Back then, we didn’t sing, we cried”, declares the world-renown photographer Letizia Battaglia at the beginning of the film, a genuine and sad reaction to how Falcone and Borsellino are remembered. But the singing and the dancing of the people to whom the two judges are little more than icons that could easily be replaced with anything else is not the worst of ungratefulness, for before the festivities even begin, we get a myriad of interviews with pedestrians and working-class citizens who express very candidly their nonchalance towards the subjects of the celebration.

It is at this point that we are introduced to the character of Francesco Mira, veteran event planner, who is to be responsible for organizing the party celebrating the 25th anniversary of Falcone and Borsellino’s murder. The film here uses a brilliant visual technique that for me both defined it and gave it a unique ability to switch between a past long gone and a painfully bitter present. Every time Mira is on screen, he is captured in black and white, both when he is alone on the screen and when he is in the company of others. What the director tries to convey with this, I am not sure; Mira here is as cowardly as everybody else, even though he does not belong to this era. 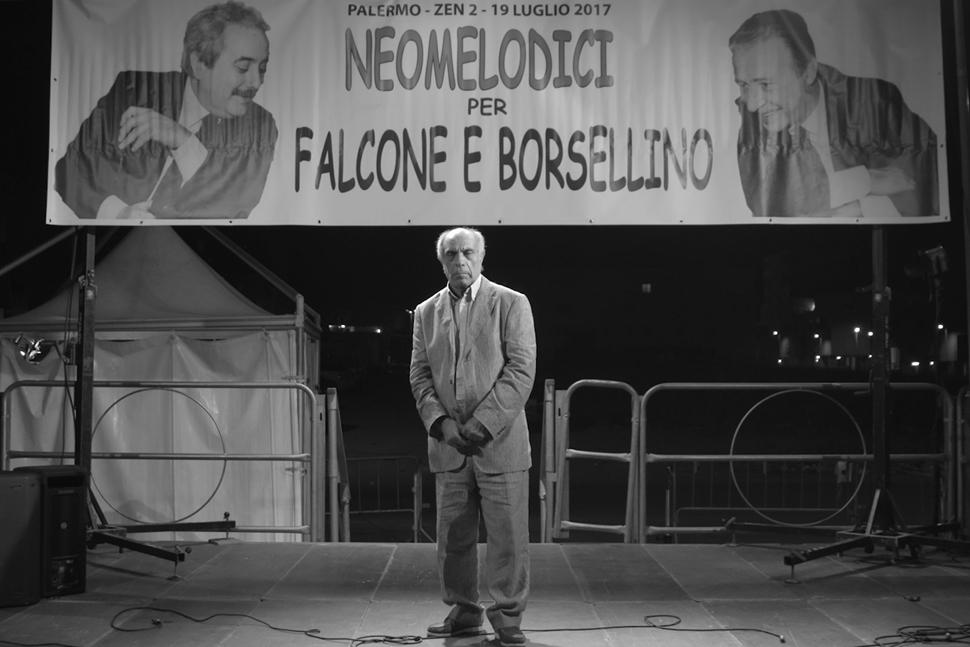 The film’s narration is split into two, as we constantly swap between director Franco Maresco and Letizia Battaglia, who express their anger and unhappiness towards the current situation is very different yet similar manners. Franco’s questions are extremely direct and forward as if he directly seeks the fright and cowardice in his interviewees. Letizia, who is just as angry and disappointed if not more, is very outspoken about her rage, often resorting to obscenity and a middle finger.

The film I think attempts to do so much, tries to tell many stories and for the most part succeeds, but sometimes it feels scattered and uncertain about what it is exactly it wants to say. But overall, its message is clear and the abundance of stories it narrates feel personal and give the documentary its vitality and sense of humanity.

The Mafia is No Longer What it Used to Be is a melancholically gorgeous “sequel” to Shooting the Mafia, it portrays how an entire nation is forgetful and ungrateful towards the effort of men who fought to save it, and the cowardice and pretentiousness that comes naturally with their social behaviours. And even when it tries to do so much that it distracts itself from its main objective, it still manages to tell its stories beautifully and potently.

Family Romance LLC [2019]: 'MAMI' Review - This gentle detour for the German legend is a weird examination of modern relationships