The Rehearsal (Season 1), Episode 3 Recap and Ending Explained – The last episode of The Rehearsal was a sneak peek into Nathan’s own stance on his life. The latest episode of season 1 deals with emotional sentiments and how things going out of our control affect our lives.

We see Nathan dressed as Batman playing hide-seek with his (supposedly) son, Adam, and co-parenting partner, Angela. Adam brings a cat-woman suit from the shopping bag and suggests Angela try the suit on. Slightly taken aback by the gesture, she mentions about not celebrating Halloween. She believes it is a satanic holiday, and her religious belief implies that Satan does sacrifices on this day.

Nathan is surprised to learn this information; he diverts his son and makes him understand why they are not going to celebrate Halloween this year. Then, Angela explains why she has apprehension about celebrating the day as they discuss the religious and traditional context of the day. Angela advises Nathan to open his eyes and understand that not everything is make-belief; some things are real in life.

The new episode is basically set as a look at co-parenting and taking care of the child’s well-being while also sharing responsibilities around the house, as the couple juggles their professions too. Nathan and Angela are two different personalities. Both people have a different understanding of the world they live in, and it is precisely what the show tries to explore with this episode.

Episode 2 left us with the understanding that Angela is a god-fearing woman whose life decisions are based on some rules and ideologies that are deeply rooted in religious preachings. However, Nathan is more logical and analytical about his ways of life. His lifestyle is based on the time he gets off from the work he does for a living.

It has only been two days since Nathan has become a father in this simulating project of co-parenting. He is still trying to figure out things in life that he never imagined he would have to in a day. He is trying his best to understand Angela’s grand vision of her future life. She sees herself living a life that promotes self-sufficiency, so Nathan takes this idea very seriously and helps her create a garden that grows flowers, seasonal vegetables, and fruits.

However, there is much to do on the farm regarding sustainable living. Nathan feels she has sincerely taken the duty of raising her 3-year-old son in the house, while he is doing more of the work required for the fulfillment of said sustainable living than Angela (the one who envisioned it in the first place).

Every day she lists things that need immediate attention (such as unclogging the water pipeline or putting up the irrigation drip in the garden), and Nathan diligently tries to get them done as the man of the house. He narrates that he is not much of a gardener and has no idea about irrigation. However, Angela prefers on-care child duty, which makes sense to him because she is good at it.

Within 3 minutes of the episode, we are already in sync with their lives, where one is a hands-on mother to Adam, and the other is efficient in getting the household running without lapses. Nathan hopes that the functioning of this simulation should be authentic to make them feel like a real family.

While helping Angela live her dream life and co-parenting Adam, which will also help him comprehend if he will make a good dad, Nathan drives to his workstation for a new project. He had several rehearsals already lined up when he moved into the house – which indicates that now he has to maintain a steady balance between his professional work and rehearsing as a family living in the house.

Between juggling his life and deadlines, he is simultaneously working on a project with Patrick. The latter has an unresolved issue with his brother (an executor in his late grandfather’s will.) Before rehearsing the actual confrontation, we see Nathan discussing with Patrick how he can help resolve their issue.

Patrick shares that his brother feels he is after his grandfather’s money. It bothers him that his brother is highly critical of all the girls he has ever dated. He wanted to change his brother’s mind about his girlfriend being a gold digger. The staged conversation/the rehearsal takes place in an eating joint – at Cane’s Chicken fingers, where both the brothers used to visit as kids with their grandfather.

During the conversation rehearsal, Nathan, in his strap-on laptop (preparing a flowchart), observes that Patrick almost seems to recite the script and not feel the emotions he is supposed to feel to make the conversation more convincing. He thinks that a personal conversation with a sibling should be more intimate and, at the same time, have a balanced tone of assurance and composure.

So, Nathan finds new ways to approach the project to avoid any verbal brawl or rude commentary that might lead to ineffective results. However, it is difficult for him to comprehend why Patrick is not responding cohesively to the idea of having the conversation with his brother. Keeping in mind that his brother is rational and demands the reason for everything, Patrick must follow his heart during the actual discussion.

At the same time, Nathan also realized that his work kept him late. It means his time with Adam gets jeopardized. When he returns home, Angela had already put Adam to sleep. Later, she shares little details about Adam’s recent activities with Nathan. Feeling left out from the recent developments, Nathan inquires if Adam ever asks about him. 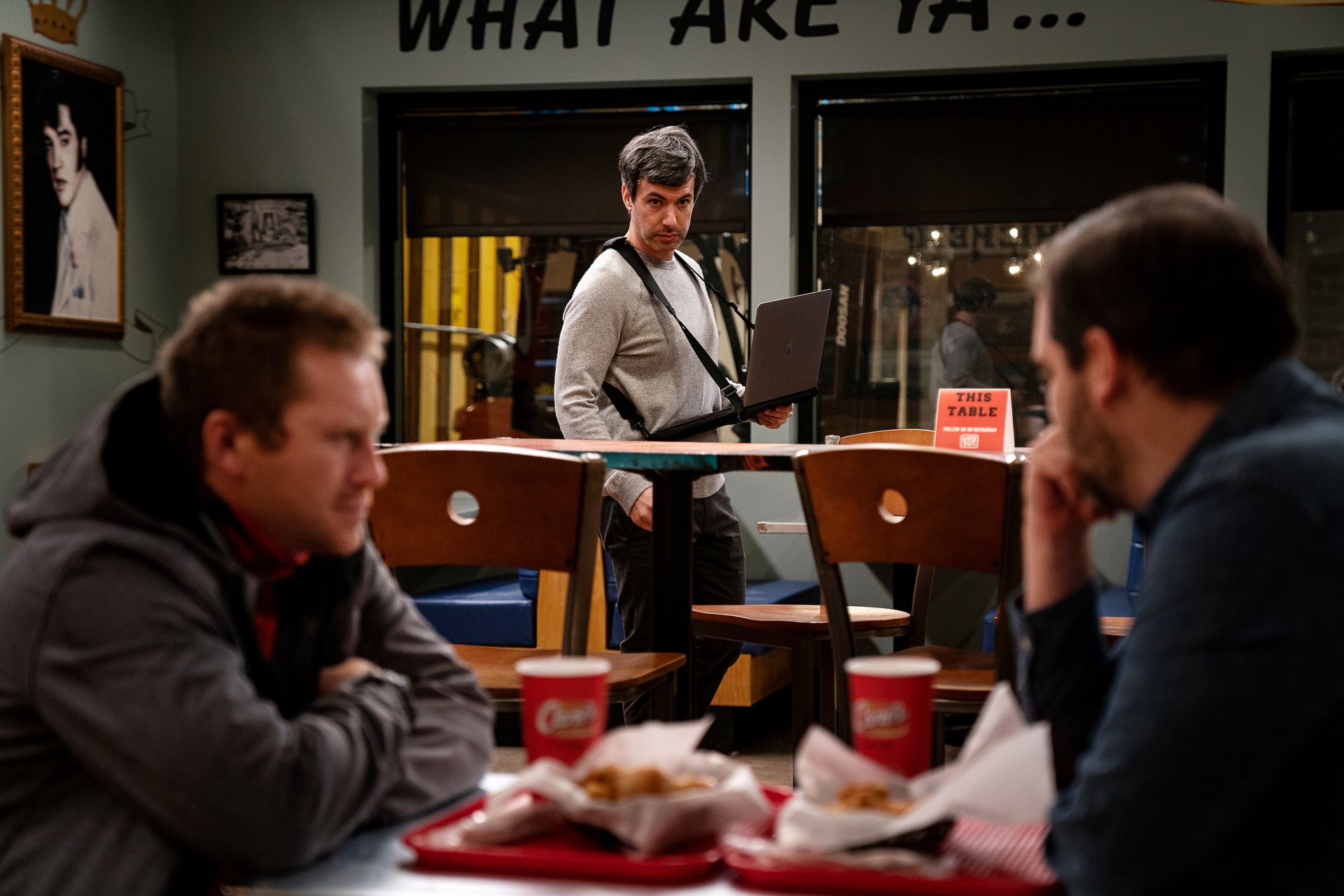 As the show progresses, we learn that Nathan has started to understand all the critical components of a good rehearsal. Learning how to balance his life, Nathan is now intensively involved in caring for his son. He takes Adam to his work and lets him be around while Nathan observes Patrick in his rehearsal. This is when it strikes him that he has been neglecting one of the crucial components of the entire process – feelings.

Understanding what you are feeling and making decisions based on that is essential to handling any situation in life. Spending time with Adam helped Nathan understand this theory. Although he acts like a dad to Adam, he still doesn’t feel like one from the inside. Does this mean Nathan doesn’t know how to handle his emotions? Is he inadequate to let out his feelings during specific situations? Seeing the problem, he uses the same theory in the case of Patrick, who is also constantly struggling with showing his emotions.

To make his theory practical and more effective, Nathan suggests his actor ask Patrick to accompany him to his uncle’s barn. Patrick is unaware that everyone in the barn is an actor. They ask him to help them move an old generator from the barn. Nathan believes that being close to an older person (almost the age of the grandfather) will help Patrick comprehend his emotions better. Spending hours in the presence of this man will get him to understand how he can articulate his feelings in words – especially in front of his brother.

During this experiment, Nathan choreographes a series of events. He has planned a situation where Patrick and the older man would bond over a problem that involves real gold and money. The plan eventually works in his favor, as Nathan witnesses that Patrick is fond of the older man. The next day, in the presence of Patrick, Nathan announces (per the plan) that one of the close relatives (grandpa) of the actor in the rehearsal has passed away. Nathan then calls it a day, saying it is best that everyone takes the day off and spend quality time with the family and be grateful for their lives.

The following day, during the rehearsal, Patrick seemed composed and totally in charge of the conversation, which was an actual representation of the real situation in his life. The idea of connecting with the stage actor’s grandpa, winning his trust, and getting into a confrontational situation with the actor helped Patrick process his emotion the right way. The final day of the rehearsal came precisely the way Nathan had predicted.

On the personal front, Nathan and Angela decide to hire a nanny so they can manage their time better and also keep the harmony of their domestic life with Adam. While interviewing the nanny for the job, both of them explain how nontraditional/non-romantic relationship works in this simulation experience.

Later, in the office, Nathan learns that Patrick is not available and no one is able to track him. When he finally gets him on the phone, Patrick asks Nathan to join him in the amusement park that he went to with his girlfriend. But by the time, Nathan got there; Patrick was nowhere to be seen.

Maybe for some, a rehearsal of a situation they dread the most in real life is enough. It could be possible that Patrick was okay confronting his brother and making him understand how he feels about his decision. This made Nathan wonder how he could so easily create feelings in other people’s lives, whereas he was unable to feel anything in his own.

While going through the family photo album, we see different pictures of Nathan and Angela with Adam in other places. Although the photographs are falsely created, the album’s purpose is to fill in the gap they are missing out. Time moves differently in the simulation, and Nathan is still getting used to it. The clock is constantly ticking which is defining moments lived in the house.

Within the simulation, we see Nathan bonding with his 3-year-old son, and then a minute later, a 6-year-old child emerges from the room. Custom digital mirrors are installed in the house to indicate the time passing by, and one is aging at the same pace as the child is growing up. It implies that every moment is precious, and sticking to one moment is difficult. It also means the world around them has to move faster. Nature’s timeline has to be accelerated so that their brains adapt to the new reality.

Nathan talks about how fast time is moving that it makes you count on your memory which is now only a glimpse of your existence. He overlooks the window, watching Angela plant more crops. He feels envious of others who can take so little time and effortlessly blend in a life that is not real. A house with two different personalities can still live a harmonious life, knowing only the things they need to know together and ignoring the rest. Differences of opinion can happen between two people, yet they can live happily together by acknowledging their presence and emotions.

Angela is so committed to her life now that she is oblivious to the changes around her. The 3rd episode ends with Nathan walking to the kitchen sink, where Angela is washing the fresh produce from the farm. He flips the vegetable, hiding the barcode from Angela.

Does this indicate that the seamless simulation of the beautiful life is slowly starting to crumble? In the end, Nathan asks how long you can deceive yourself and prepare for any situation.

Find out what happens in the lives of Nathan and Angela within the stimulating experience in the next episode of The Rehearsal streaming from 4th August.

Where to watch The Rehearsal