The Rehearsal (Season 1), Episode 5 Recap & Ending Explained: The all-new episode of The Rehearsal, titled Apocalypto, narrows down to the importance of having religious beliefs in a household. Especially if the house has two people from different religious backgrounds – Is it essential to raise your child with the same belief as yours? It also shows the conflict of reliving your past actions in a different environment and how it helps you understand your values or whether you stick to them in the long run.

Here is a recap of the fifth episode of the Rehearsal; please be aware of spoilers ahead.

The opening shot of episode 5 shows a father and son duo, playing pretend doctor and patient. Bonding over a stomach ache and eating Doctor Fart’s poop as medicine, Nathan and six-year-old Adam share a bizarre but joyful moment together. Later, while watching the recording of the same with Angela, it feels like she disapproves of how Nathan is trying to connect with his (pretend) son.

At the same time, on the corner of the living room wall of the family home, there is a photo frame of the Bible verse Esther 4:14 that quote – “Perhaps this is the moment for which you have been created.” The quote signifies that every person serves a purpose in life.

As shown in the other episodes, we learn that Angela is a firm believer in Christianity. The decoration of the house resonates with her faith and personality. The question is, will that affect how she wants to raise her child? Angela’s reaction to the video recording of Nathan and Adam playing and eating poop (even though it was only chocolate) did not go well. We understand every parent has a different style of raising a child; while one could be lenient and patient with the child, the other could have a strict way of putting things to order. In this case, it seems like Angela is rigid about the environment she sees fit for Adam to grow up in.

Ever since the show rewinded the time turning Adam into a six-year-old, Nathan is determined to become the best father to his son. He realized that neither of them would get anything out of the rehearsal if they were not fully committed to co-parenting Adam. He cancels all his other rehearsals to focus on his family life. With the idea of only concentrating their energy on raising Adam (as initially conceptualized for the show), both are more involved with their son’s well-being.

Angela wishes to teach her son a faith-based homeschooling curriculum. While Nathan was raised as Jewish, he is still keen to try things according to her because of her devotion to Christianity. However, when Nathan’s parents visited them, his mother emphasizes that there is nothing wrong with instilling some of the same traditions and values in the child that one has grown up with. She also points out that Nathan is following his old habits by agreeing to everything Angela wants. Although it was confusing for Nathan, he understood his mother was trying to be realistic. Is he following the same path of his previous relationships by not asking Angela how does she feel about raising Adam with Judaism too?

It was his mother, who mentioned that it is easier to go along with things than deal with the tension of having a conflict. This made him question his perspective on the decision that would change everything. Nathan’s relationship with Angela parallels a real relationship in which he has been involved in the past. He does everything according to her to avoid getting into fights. The tendency to escape things usually makes him anxious, ultimately changing the course of the environment with an easier path.

With this in mind, he comes up with a solution to his situation of having a conversation with Angela about introducing Judaism into their son’s life. Bringing in his Nathan Fielder Acting School graduate as a nanny into the household, he asks her to study Angela. It would ultimately be helpful in the rehearsal of his conversation. Keeping in mind the details of the mood, environment, and different interpretations of the discussion, Nathan, along with the fake Angela, starts working on his little rehearsal.

One night he tries to initiate the discussion of his religion with Angela by bringing up holiday plans to ease the conversation. When he mentions Judaism and Adam, Angela strikes out the entire dialogue because she feels Jews deny any faith in Christianity. Sensing if he pushes the conversation any longer, there could be a clash of opinion, and out of old habit, he diverts everything to discussing Angela’s favorite film – Apocalypto. However, things quickly move to a heated argument about normalizing eating feces while playing with Adam (which seemed like it was supposed to happen anyway).

Soon Nathan figured out new plans for doing things his way without bringing in more conflicts. Hiding the obvious from Angela, he drives his son to a synagogue on account of taking Adam to swimming lessons. Nathan gets very excited to reconnect with his faith through his son’s eyes. However, the six-year-old has more questions about religion than Nathan could answer. As the master of finding answers to every problem, Nathan soon hires a Jew tutor, Miriam, who will teach Adam the basics of Judaism. Thus, every day, Nathan drives his son to the tutor, coming up with different reasons to tell Angela where he would take Adam. 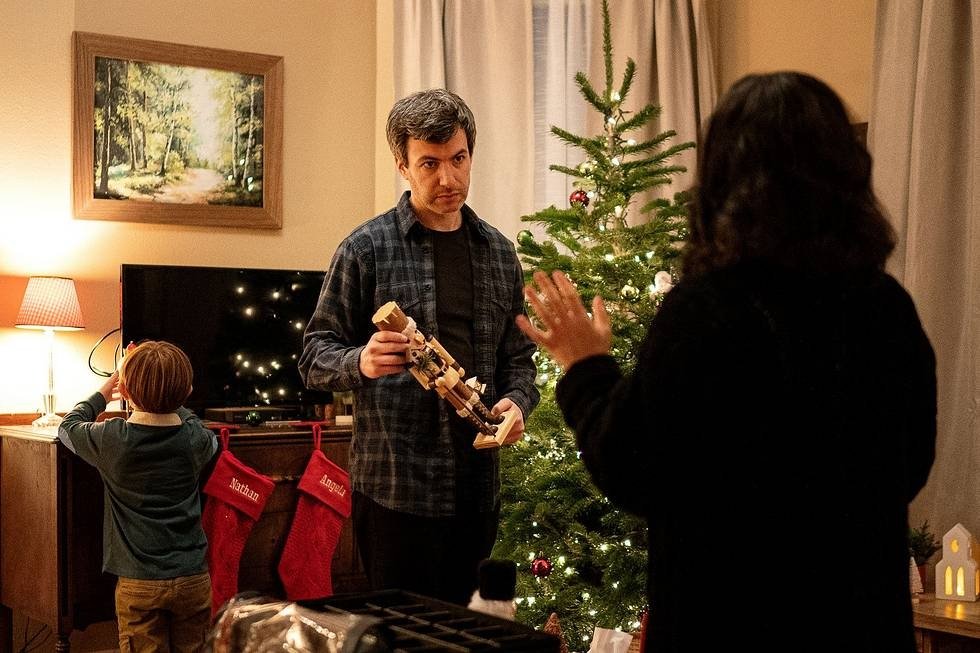 But by doing so, is Nathan implanting the idea of lying to his son? Nathan realizes this soon and decides to come clean to her because the tutor may question his plan. He shares that Angela is against Nathan about instilling the faith of Judaism in Adam. Miriam is morally uptight and stands up for him, pushing him to take a stand for himself, his faith, and his decision. However, all these complexities make Nathan realize that being a Jewish father is even more complicated than he could fathom.

Miriam suggests to Nathan that she would meet Angela and try talking to her about why she is so conflicted about religion. With the hope that the tutor is more knowledgeable about his faith, he is optimistic that she might win over Angela. However, the conversation doesn’t go as planned as Miriam and Nathan find Angela persistent about their Jewish belief. Seeing how Angela’s faith makes everyone uneasy around her, she decides to face both of them. Without losing her calm, Angela stands up for herself and shares that Nathan puts up a fight and manipulates people with his tactics and his lying habits.

Nathan unweaves the truth behind who the real Angela is in the Rehearsal:

Recently, Nathan has been reviewing the footage of the CCTV camera he installed in the house. Having difficulty interpreting Angela’s behavior, he tries to understand her even more. Nathan realized they are having more disagreements, proving it a good challenge for the rehearsal. He was also unsure if they were arguing as co-parents or if Angela was mad at Nathan. The ongoing situation of both Nathan and Angela also replicates a genuine concern that usually occurs when two people with different mindsets and values start to have conflicts.

All this while, Nathan assumed that Angela was truly engaged with co-parenting; however, when he saw the footage of the days he was away – he learned that she was oblivious to the situation in comparison to when The Rehearsal was on with Nathan in it.

With the help of the footage, he understands that Angela was not actively involved in the rehearsal during his time in LA. Despite all his efforts to make things happen for her future life, she was making no efforts whatsoever. It makes Nathan question Angela’s motive in the rehearsal, as to whether she is not keen on living the experience she initially desired anymore.

Perplexed by Angela’s recent behavior and CCTV footage, he rehearses with the fake Angela. Nathan interrogates why she won’t let him have this experience the way he imagined in his mind. Seeing the conversation steering to a heated argument, Nathan is slowly losing track of which version of himself he is supposed to be in these rehearsals.

However, he still hopes to get the correct answers to what Angela wants from this show. Cross-firing one another on legitimate grounds and feelings, the course of the fake conversation takes a violent turn that shakes Nathan from the core. Afraid of the outcomes – such as hearing things he has been avoiding for the longest time, he re-sets the rehearsal to try a different approach that is more convenient.

Nathan and Angela are sitting on the couch in their living room. He confronts her about the footage and why she is so distant otherwise and controlling when he is around. However, Angela respectfully approaches the discussion. She tells him that instead of collaborating with her in various scenarios he presented in the rehearsal (without giving her any direction), he changed everything to his convenience. Even though the rehearsal was initially designed for her to experience motherhood the way she always imagines, the show’s direction ultimately (psychologically) steered towards making all of it about him.

Adding to that, she also mentions that she wanted the whole thing for her – playing a mother to an eighteen-year-old, and for that, she doesn’t understand when that moment would come. Angela feels it is about a good time they bring closure to this chapter of her life. She is grateful for all the beautiful experiences Nathan has made possible for her, and now she wants to leave it to that.

Nathan did not foresee that his conversation with Angela would have such a discourse. He contemplates everything as he and Adam bid farewell to Angela, who finally leaves the house. Nathan feels there is still a strange urge to carry on with the show without Angela in it.

Maybe doing this alone – syncing and swimming on his own terms is what he really needed. Perhaps he created this show to materialize his desires, to be a parent, to take control of his life the way he wanted, and to celebrate the little things that he always wanted. He finally stands up for himself and his values as he takes down little things that resonate with Angela’s perspectives in the house. He says that we don’t always get to choose what happens in life, but we do get to decide if we rehearse for it.

Miriam, Adam’s Jew teacher, expresses that many responsibilities come our way with traditions and values. Our sole responsibility is to take things into our hands and move ahead in life – educating others about our faith and beliefs. But, at the end of the fifth episode, Nathan Fielder leaves us with a great question – do we care about taking those traditions and values seriously and imbibe them in our daily life, or do we continue to carry on with our life on our terms?

We will find out where and how Nathan will pick up from this note in the finale episode of The Rehearsal.

Where to watch The Rehearsal