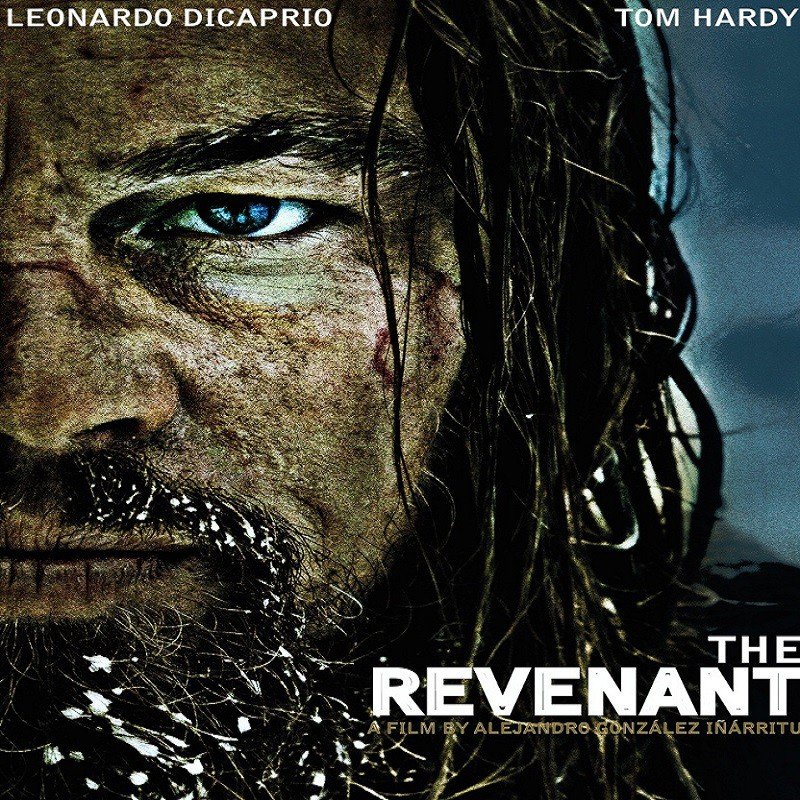 Alejandro Gonzalez Inarritu’s ravishingly wild, survival movie “The Revenant” (2015) opens with a shot of a steadily flowing stream, whose currents are disturbed by the steps of men carrying guns. A man chooses his target and the gun sound reverberates through the forest, signaling the impending sense of doom that waits for all the frontiersmen. Arrows whiz past in & out of the frames, making contact with the human flesh; faces are bludgeoned; musket fire pulls down archers from the tree tops. Without employing the use of 3-D, these visuals just drop us in, diffusing the nauseating feeling as if bloody bodies are falling all around us. It’s like we are witnessing a graceful, ballet dance in one moment and all of a sudden DOP Lubezki makes us to witness a cataclysmic cosmic dance. This mad-cap energy juxtaposed with a spiritual, naturalistic reflection (aka Terrence Malick-mode) is what makes “The Revenant”, an incredible, artistically whole movie experience (and let’s not forget  Dicaprio’s heavy groans, gritted teeth and traumatized eyes).

Michael Punke’s “Revenant: A Novel of Revenge” is one of the compelling historical fiction about American Frontier in the 1820’s. It was the era when thriving regiments of fur trappers (pelts) faced band of hostile native tribes. The little conflicts set the tone for future battles, where the Native Americans were stripped off their economic as well as political influence. “Revenant” protagonist Hugh Glass (Leonardo diCaprio) is considered to be one of the most extraordinary frontiersmen of that era (the head tracker of ‘Rocky Mountain Fur Company’), whose real life endeavors turned him to be a legend. Inarritu’s portrayal of Hugh Glass too verges on the legend than verity. The respect Glass gained among his peers annoys a money-hungry trapper Fitzgerald (Tom Hardy). 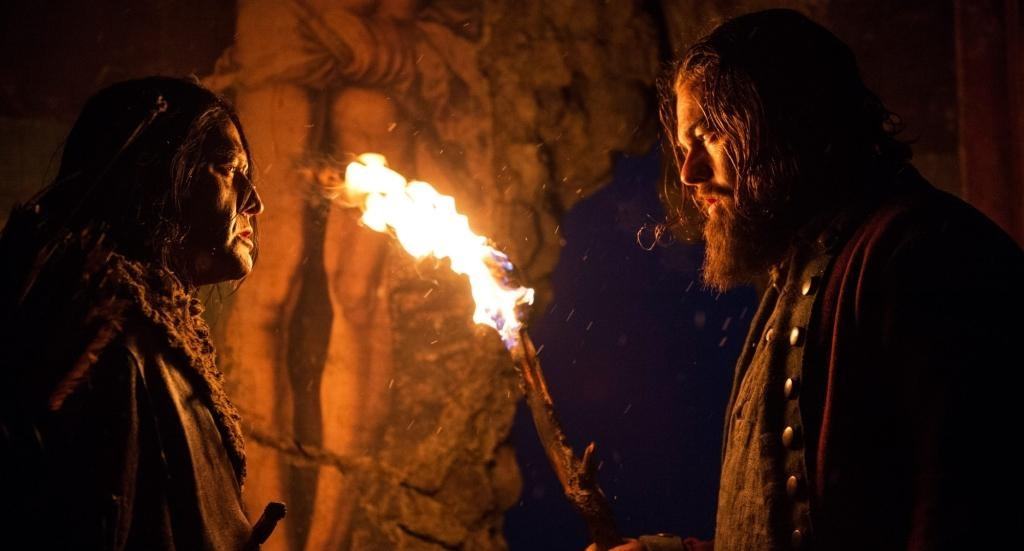 And, as the crisis strikes in the form of Indian tribes (or Ree), Glass guides the remaining trappers to escape downriver. In one of the solo scouting mission, Glass is brutally wounded by a grizzly defending its cubs. Honorable Captain Andrew Henry (Domhnall Gleeson) promises $100 for a man that will stay behind and ensure that Glass is given a proper burial. Young Jim Bridger (Will Poulter) and Fitzgerald takes up the job as Glass’s ‘Pawnee’ son too stays with them. Soon, Fitzgerald betrays the vows he has taken, abandoning our mauled protagonist. However, through incredible force of will and determined by revenge, Glass crawls (literally) back to life. Although Glass’ 1823 odyssey never reached the celebrity status, it is akin to the tale of other American folklore heroes like Jesse James or Jim Bowie.

The agonies experienced behind the making-of “Revenant” (braving the weather; shot by natural light; Dicaprio sleeping in animal carcass or eating raw bison meat) gave us a feeling that it would be a companion piece to majestic survival/adventure tales like “Aguirre”, Apocalypse Now” or “Fitzcarraldo”. And, director/writer Inarritu doesn’t disappoint us, although I felt “Revenant’s” rumination about man and nature’s relationship traverses in ‘Malickian’ land (“The New World”, “Tree of Life”) rather than Herzogian territory. The whole dreamy, show-not-tell kind of flashbacks (where Glass yearns for his wife and child) are fine additions to what might seem like an elemental plot. Inarritu’s script (co-writer Mark L. Smith) adds a lot of emotional weight to Hugh Glass’ characters (like the fictional Pawnee son), which is largely absent in the novel. He avoids giving the revenge, a sweet nature so as to make it an existential wound on Glass’ psyche, along with the lashes on his skin. Inarritu also doesn’t try hard to punctuate the adverse conditions experienced by Glass with equal amount of kind acts. Unlike, many Hollywood features, the Native American tribe portrayals in the film aren’t strictly one-dimensional. They are neither romanticized nor depicted as savages. The Natives were given a human face and their obliteration is strongly registered from the historical perspective. 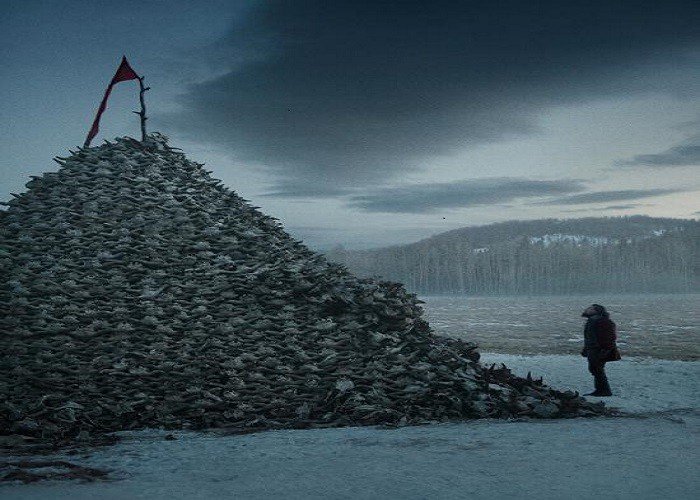 A subplot involves an Indian chief searching for his kidnapped daughter (a clever inversion of the situation we saw in John Ford’s “The Searchers”). It is interwoven with Glass’ story at a key point and this makes the ‘Indians’ or ‘Arikaras’ to be more than a faceless barbarian. This sub-plot could have been fully developed, but considering the Glass’ sprawling odyssey, it’s nearly impossible. Inarritu kind of provides a emotional catharsis to the viewers — which the novel totally lacked (staying true to history) — although he makes sure it is only short-lived (Glass’ glazed eyes shows the emotional wound flourishing). Even if the viewers aren’t enamored by the simple plot or a ruminating script, it would be hard for them to resist the Lubezki-Inarritu pair’s virtuoso shots in conveying the frontier life chaos. Each and every shot is a testament to technical excellence. There’s the trademark Lubezki 360-degree action sequences, but what stands out is the pairs’ creation of a dog-eat-dog world, perfectly juxtaposing nature’s stunning beauty along with humans’ filthy bloodshed (and animals’ too – rendered by CGI). That ‘bear-brutality’ scene would definitely go down as one of the most intense cinematic moments ever.

The film’s name is, of course recognized by the presence of versatile star Dicaprio and the weighty question that comes with it: “Will he get an Oscar this time around?” Considering his choice of roles (he has also chosen to play as notorious serial killer H H Holmes in upcoming “Devil in the White City”), I don’t think Dicaprio would be bothered by getting the coveted statuette. On the outset, the choice of portraying Glass may be deemed as Oscar bait. But, there’s never a moment where it felt Dicaprio is trying to show emotions that might woo the academy voters. Like Timothy Spall in “Mr. Turner”, he relies on grunts and wheezes to exhibit his endurance rather than go for large emotions. The decision to keep the camera on the protagonist’ face for pivotal moments could have been easily backfired, but Dicaprio makes us to savor the calm laments & vigorous stress, evident in the eyes.

“The Revenant”  is a visually striking tale about the perseverance of human spirit. It expresses that in a heartless, savage world even reprisals wouldn’t bring any kind of emotional cleansing.