This is a Christmas present from God! She’s our baby! 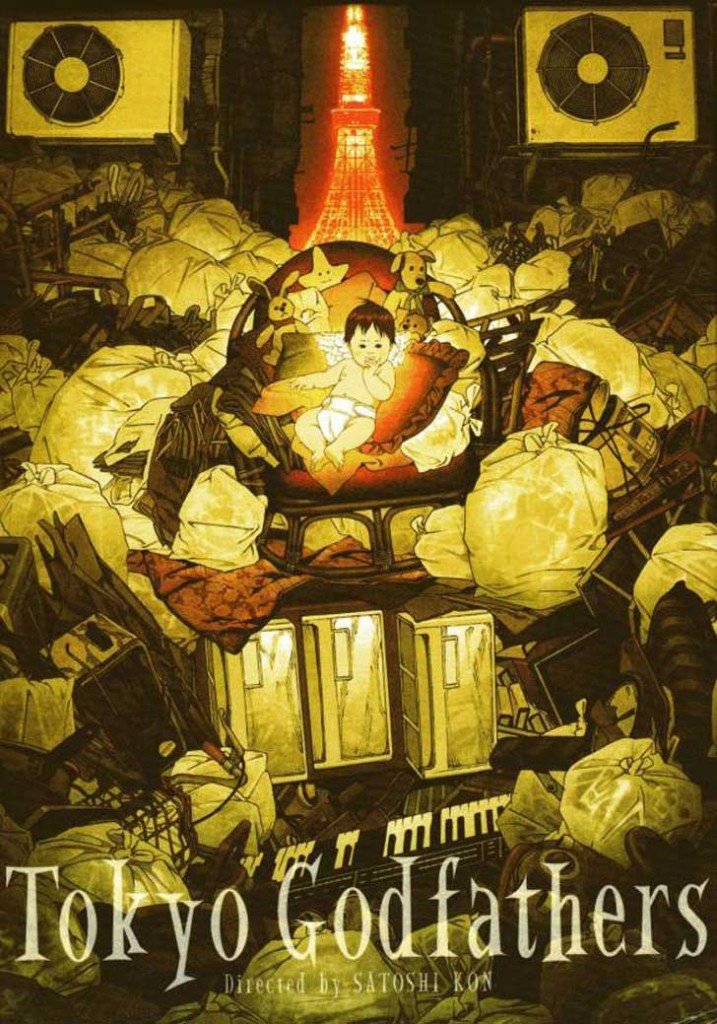 Anime master Satoshi Kon’s films always have this dichotomy factor. Kon’s most accessible feature (or as his passionate fans would call it as his most ‘normal’ anime) Tokyo Godfathers (2003) also possesses many dichotomies, which aren’t as astoundingly complex as his previous anime “Perfect Blue” (1997) and “Millennium Actress” (2001) (Kon also made the magnum opus “Paprika” (2006) & dark, psychological anime TV-series “Paranoia Agent” (2008), before his death at the age of 46) . “Tokyo Godfathers” have an overly sentimental core to make a typical Christmas movie, but the anime with its character sketches remains as unorthodox as it could be. It has the absurd coincidences or big stunts of an action movie, yet it brims with a social conscience. There’s hard-knock realism at every turns and also a delicately imbued hopefulness.

“Tokyo Godfathers” is Kon’s take on the famous, sentimental Christmas fable “3 Godfathers”, written by Peter B. Kyne. One of the cinematic incarnations of the tale was made by John Ford in 1948. It was about three outlaws finding a newborn baby and a dying mother in the middle of a desert. They vow to protect the child, risking their freedom. Kon’s three primary characters are also outlaws. But, not the kind of outlaws, who rise from lawless society; these people are ousted from a lawful society. A flamboyant transvestite Ms. Hana, an alcoholic gambler Gin and a teenage runaway Miyuki form the trio, who all live in a cardboard shack, waiting for ‘something’ to pull them out of their dire straits. 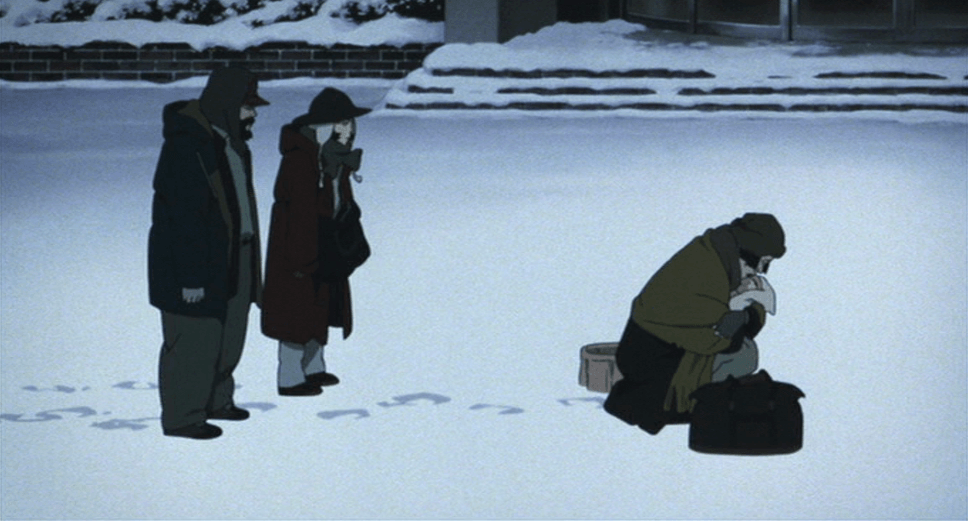 As the trio carry out their routine work of scavenging the garbage heap, they found an abandoned child with a brief note and a key. Former drag queen Hana, who has the dreams of motherhood, takes in the baby, while Gin growls to give the baby to police. Hana sees the infant as God’s gift to make them cling to their precious lives and decides to find & ask the mother why she abandoned this bundle of love. The station locker key gives them a clue to the alleged parents’ dwelling. The trio’s journey through Tokyo suburbs is riddled with meeting strange characters and bears witness to weird events. The coincidences, miracles, the rise of inner conflicts and harsh truths are metaphorically attributed to the arrival of heartwarming baby.

“Tokyo Godfathers” in many ways could have been the mawkish, ‘lived-happily-ever-after’ fairy-tale. Of course it has share of Christmas movie miracles and predictable episodic breakdowns or redemption. But, writer/director Kon (co-writer Keiko Nobumoto) perfectly balances the outrageous happenstances with the sad, emotionally wrenching realities of life. The casual brutality of the well-to-do people unfurled against the three homeless is vividly portrayed. The cruelty is heaped upon them sequence-after-sequence so as to think that the ending belonged to some other film. But, it’s a minor flaw in the movie that possesses rich subtexts and themes. Although the brutalities and few miracles are wonderfully juxtaposed, the script’s greatest quality is its bewildering sense of humor. For example, out-of-nowhere, an ambulance suddenly crashes into a supermarket and its drives lurches, asking the nearby person to call for ‘ambulance’.

The story line might make a viewer think of why it isn’t made into a live-action film? The answer, of course, could only be grasped by seeing Satoshi Kon’s mesmerizing use of the animation craft. “Tokyo Godfathers” is one of Kon’s simplistic stories; it lacks reality-warping visions, exemplary surrealism or psychedelic overtures. But, Kon’s keen eye for positioning visuals and diffusing little character details deserves a detailed dissection. He uses classic visual symbols like wind or light to indicate death or break down. For eg, when Gin is beaten up by a group of scornful teenagers, the lights in the nearby building goes down one by one, and when eventually Gin gets up, one light in the building is turned on. In the IMDb boards, an observant viewer has seen this scene as a reference to video game ‘Street Fighter’, as the buildings are said to be positioned as health-bars, whose brightness dims down with each beating (and let’s not forget the humor intended in the scene, when homeless old man dies). There are plenty of such auteurist visions, which are what makes this film more than an old-fashioned holiday fable (those who are enamored by Satoshi Kon’s visuals must see the excellent video essay ‘Editing Space & Time’, by Tony Zhou).