The Sadness (2021) Movie Ending Explained & Themes Analysed: There is an absolute old-world slasher charm in Rob Jabbaz’s unyieldingly repugnant offering, ‘The Sadness (2021)’, which is probably one of the bloodiest and goriest films I have ever seen. ‘The Sadness (a.k.a Ku bei)’ starts to shock you after its deceptively mellow first ten-something minutes; and it continues to shock with more and more gusto with each passing minute. The relentless violence might be too much for casual viewers wanting to have a fun zombie adventure experience a la ‘Train to Busan’. However, for slasher aficionados, the nefarious experience would make this an exhilarating watch.

The story starts on a glorious sunny day, hardly betraying any sense of foreboding when Jim (Berant Zhu) and Kat (Regina Lei) wake up full of hope with a touch of banter and a hint of bickering. The couple feels the first sense of something askew when Jim is giving Kat a lift to the nearest station. They catch a glimpse of the remains of a dead body being taken to an ambulance amidst the presence of police, seemingly a result of a street accident.

Things quickly escalate on Jim’s return journey from the station, though. In his usual breakfast place, an old woman in a hospital gown appears. Although, at first, she seemed timid and almost catatonic, to be honest, she quickly changes her state. And this is where the proverbial shit hits the fan. What follows after sets the tone of the film. As a viewer, the immediately following massacre at the food joint at the hands of a grandma is going to be the first test. If you cannot stomach the literal face-scratching scene, then it is better to avoid venturing further. 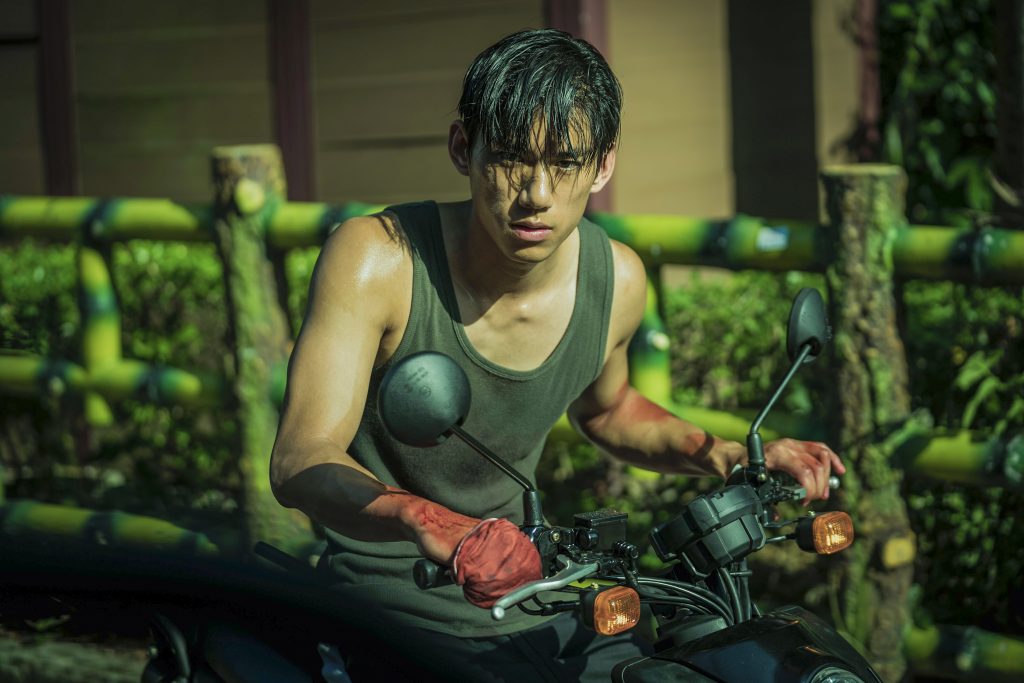 Shocked and petrified, Jim returns to the house with some difficulty, as sporadic riots emerge everywhere. As he tries to reach Kat, he is immediately attacked by his neighbor. Blood-red eyes reflecting a manic gleam, the previously friendly neighbor shows zero reluctance in his desire to chop Jim alive. A kerfuffle ensues, and Jim survives and manages to kill the new beastly version of his neighbor. But not without paying a costly price. The neighbor manages to chop two fingers of Jim with a garden scissor before he succumbs.

As Jim, sans two fingers, gingerly progresses toward the destination of, Kat, we are shown what is happening in the other part of the town featuring Kat. On her journey, Kat is bothered by an overtly and creepily inquisitive middle-aged businessman (Tzu-Chiang Wang). Kat tells him off sharply. One can tell that this businessman will be ‘the’ antagonist from his demeanor even before he ‘transforms.’ From this point onwards, the story takes one disturbingly violent and bloody turn after another. The train of depravity well and truly leaves the station.

Amidst this depravity, whether Jim and Kat get reunited; drives the story forward. Gradually they, consequently, also learn about the ‘Alvin’ virus, which seems to be the culprit behind this nightmare. With the hyena-esque pack of humans at every corner, and, particularly for Kat, the unshakable zombified businessman as her stalker, the uphill battle of reunion of Jim and Kat tries to bring some emotional balance to the otherwise pool-of-blood of a story.

Although the story of ‘The Sadness’ is structured like a zombie flick, Rob Jabbaz does not necessarily make this a zombie flick. In its glorious gore, ‘The Sadness’ would have more takers from the slasher sub-genre than from the zombie sub-genre. The ‘Zombies’ of this film are not brainless with a narrowed vision to just put their dental imprint on human flesh. The ‘Alvin’ virus unleashes the absolute horror within. The horror that our cover of humanity hides. The tiniest of sadistic desires would take their complete form, not hindered by any shame or trace of humanity. There is a similarity with many works in that regard. The immediate one that would come to mind is Robert Louis Stevenson’s Nineteenth-century story “The Strange Case of Dr. Jekyll and Mr. Hyde.” The story is almost synonymous with the idea of inner evil rearing its ugly head, completely ignoring the outer layer of humanity. In a broader sense, this is suggestive of the theory that human beings are inherently evil, which is shackled by outward societal niceties and responsibilities.

‘The Sadness’ seems to be channeling the same theory, as the doctor, researching the aforementioned ‘Alvin’ virus, claims that this virus amplifies aggression and sexual desire in humans, making them do things they would otherwise choose not to. However, all of the afflicted still have their faculty. They can still feel guilt, but their inner innate desire cannot be contained by any other feeling.

How did Jim become a Zombie?

In a heart-breaking but predictable twist, we see the bitter end of the Jim-Kat love story. Jim finally succumbs to the ‘Alvin’ virus. As discussed, the zombies in this film are not traditional zombies. Modern zombie films often gravitate toward a virus-infected zombie apocalypse rather than an actual rise of the undead. ‘The Sadness’ is not different in that regard. So for Jim to become a zombie here, he does not need to be bitten.

From other notorious examples in the film, we have seen that an open wound could be an outlet to receive the virus. When Jim got his fingers chopped off, we saw him wrapping that wound with a random cloth picked from a motorbike standing at the side of the street. This is where we can assume he might have contacted the virus. Using an unattended cloth without proper sanitization is something that needs to be dearly avoided during a viral outbreak.

The Sadness (2021) Movie Ending Explained: The end of the love story? What happens to Kat?

‘The Sadness’ saw the end of the love story of Jim and Kat, as Jim also becomes one of the sadistic monsters Kat previously needed to avoid. However, there is a hint of Jim finding the love for Kat is shown. Amidst all the sexually vitriolic abuses, Jim mentions the tender humane moments as well. Perhaps it is Jabbaz’s way of showing that maybe, just maybe, love would find a way to bypass the innate desire of violence.

On the other hand, things does not end well for Kat either. After her teary goodbye to Jim, she gets to the rooftop to get to the rescuing helicopter. Alas, what seemed like rescue, became an execution. Although it was not shown, the sound of gunfire and shouts from Kat clearly indicates that the soldiers, not wanting to take any risk, shoots her.