TSex Lives of College Girls (Season 2), Episodes 1 & 2: Created by Mindy Kaling and Justin Noble, ‘Sex Lives of College Girls’ is a comedy series, primarily about four female freshman roommates at Essex University in Vermont. With a mind that wrote some of the funniest episodes of the US version of The Office besides the hit Netflix series, Never Have I Ever, Mindy has certainly created a mark for herself. This recent series shows her style of humor with a refreshing blend of coming-of-age genre elements. Streaming on HBO Max, it is a largely amusing portrait of these characters on their journey of self-discovery.

The previous season ended with a set of cliffhangers about the characters. After being a closet lesbian for most of her life, Leighton reveals to Kimberley that she is gay. Due to disciplinary action against her, Kimberley is not going to get her scholarship. While she needs to figure out a way to fund her education, Bela needs to work on her idea of a woman’s comedy group at their university.

After a break, Leighton (Reneé Rapp) is dropped off at her university by her father. He is worried about her brother – Nico, who had to switch to a different university since he was expelled. While it is extremely easy for their wealthy family to get Nico into any private school, his worry for his son also shows his belief that Leighton is braver in general. She, Whitney (Alyah Chanelle Scott), and Kimberley (Pauline Chalamet) return to their room, where Bela (Amrit Kaur) invites them in her quirky style, with just her undergarments on. Leighton tells everyone that along with Nico, a bunch of Theta seniors got kicked out. As a result, they have an added worry about these seniors.

Since Kimberley has to find a way to make up for the lost scholarship, Whitney suggests she apply for a loan in the financial aid department. Meanwhile, Bela is pumped to start her new college magazine, which is going to be an Instagram account and a domain that they are yet to purchase. While they fantasize about their hopes and dreams, Theta seniors throw a packet of milk at them for being whistleblowers about their cheating in exams. As a result of their anger, the gang does not get to be a part of any fun activities.

While walking back to their room, they see a new hot guy walking in just the next room. In their meeting afterward, they learn that he is a climate refugee named Jackson from Kansas. The conflict in his life is that his college dorm was blown away in a Category 4 tornado. Kimberley finds his claim of being a refugee stupid since he was not displaced against his will. However, the topic of discussion changes to a non-racist tradition from Essex – everyone running in the snow, from their campus with just their undergarments on.

Meanwhile, Kimberley assumes that Leighton also came out to Whitney and Bela and ordered a pride balloon basket for her. However, Leighton is still struggling to find the right time to share this news with them. Also, she makes it clear that she is not the kind of gay person who loves extravagant gifts like balloons. Since Kimberley is scared that she would not get a loan to make up for her scholarship, Leighton decides to help her. As Leighton rightly mentions, banks give out loans to only those people who they think can afford that much money. However, their plan of going fancily dressed fails since Kimberley needs someone to cosign for the loan, and she does not want to ask her parents about it. 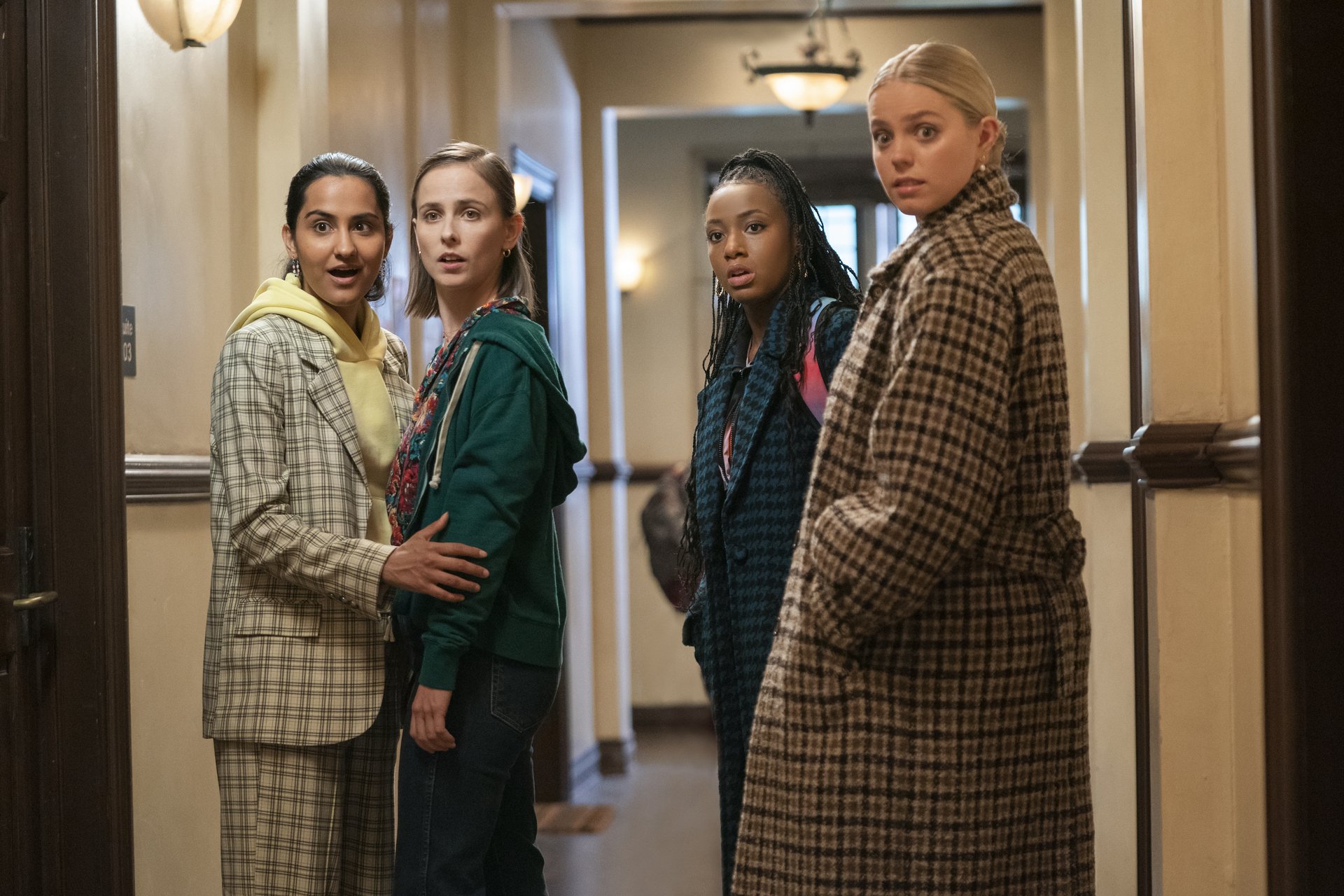 Meanwhile, Whitney sees that all her friends from the soccer team are taking up extra classes to help with their grad school resume and feels bad for wanting to waste that time. As a result, she decides to take up water polo classes, assuming them to be easy. However, the moment she starts playing, she fails at every attempt of catching the ball and eventually faints when a ball hits right on her face. She gets expelled from this class, right after.

Bela, Evangeline (Sierra Katow) and other ex-members of The Catullan bring aspiring female writers from their university together and ask them to hand over a piece of their writing. However, upon reading their terrible write-ups, Bela instantly regrets taking this decision. Later, she goes to meet The Catullan editor – Jeff, and requests to get back her old spot. He refuses since she took all the good (and female) writers out of their collective. Eventually, he decides to help her with a suggestion – think as a leader and hunt down funny people instead of expecting them to come to her.

Meanwhile, being unable to get a loan, Kimberley decides to take gigs of writing closed captions for an Australian reality show. Her colleagues from the café find the plan a disaster. While her roommates decide to go outside for the university’s snow-based tradition, she stays back and keeps working. However, the next-door neighbor – Jackson has loud sex while making it impossible for her to work. So, she decides to bail on the job and goes out with her friends. After running through the snow, they go back to an indoor party and get boozed up.

During that party, Bela finds a funny person (Kimberley’s colleague – Lila) and she discovers their first, fresh writing talent, right on that note. Meanwhile, when a girl makes a pass at Leighton, she gets awkward getting close to her, since she is still anxious about being open about her sexuality. Jackson and Kimberley bump into each other at the same party, and she asks him to keep the grunting noise down. He gives his number so text him whenever it is too loud. Her roomies cheer for her after this grand achievement of hers! Soon after, they are made to leave the party by a bunch of Thetas.

After reaching back to their dorm, Leighton finally comes out to all her roommates as gay, and they take this news in a wholesome manner. Then, they start talking about the girl she met at the party. They motivate her to send her a text saying that it would work in her favor. On the other hand, the next day, Bela goes to Jeff’s room and invites herself to have sex with him.

Since the Theta seniors kick them out of the group, the gang decides to have a party in their dorm and bring in booze to have fun. After about four hours of enjoying it to the fullest, they get pitied by their warden. As a result of feeling ashamed of it, they decide to find a way of convincing the frat group to get them back into the social circle and not be banned from parties. The next day, Kimberley tries asking her mother to cosign her loan. But listening to her speak enthusiastically about her life, she cannot muster the courage to disappoint her with such a request.

After their first night together, Bela goes to Jeff’s room every other night to have sex with him. He sees it as her trying to have fun since she cannot attend any of the school parties. Meanwhile, while speaking with her soccer team friend in a café, she sees her boyfriend – Cannan (Christopher Meyer) speaking with an attractive girl named Zoe. She gets jealous of this girl and walks up to them. She realizes that due to both of them being from a similar financial background, she can help out with some of his issues, efficiently, in a way she cannot.

On the other side, Leighton meets her crush from the previous night and has sex with her. While she is out to her group of peers, she is still slightly awkward with the showcase of her affection in public. Bela bumps into her and takes her to the Theta guys to invite them back to the parties. They go meet these seniors and suggest improving their image in exchange for the invitations. Then they recommend throwing a fundraiser to help a social cause of climate. Bela’s idea is to put on a strip show to lure people into funding. 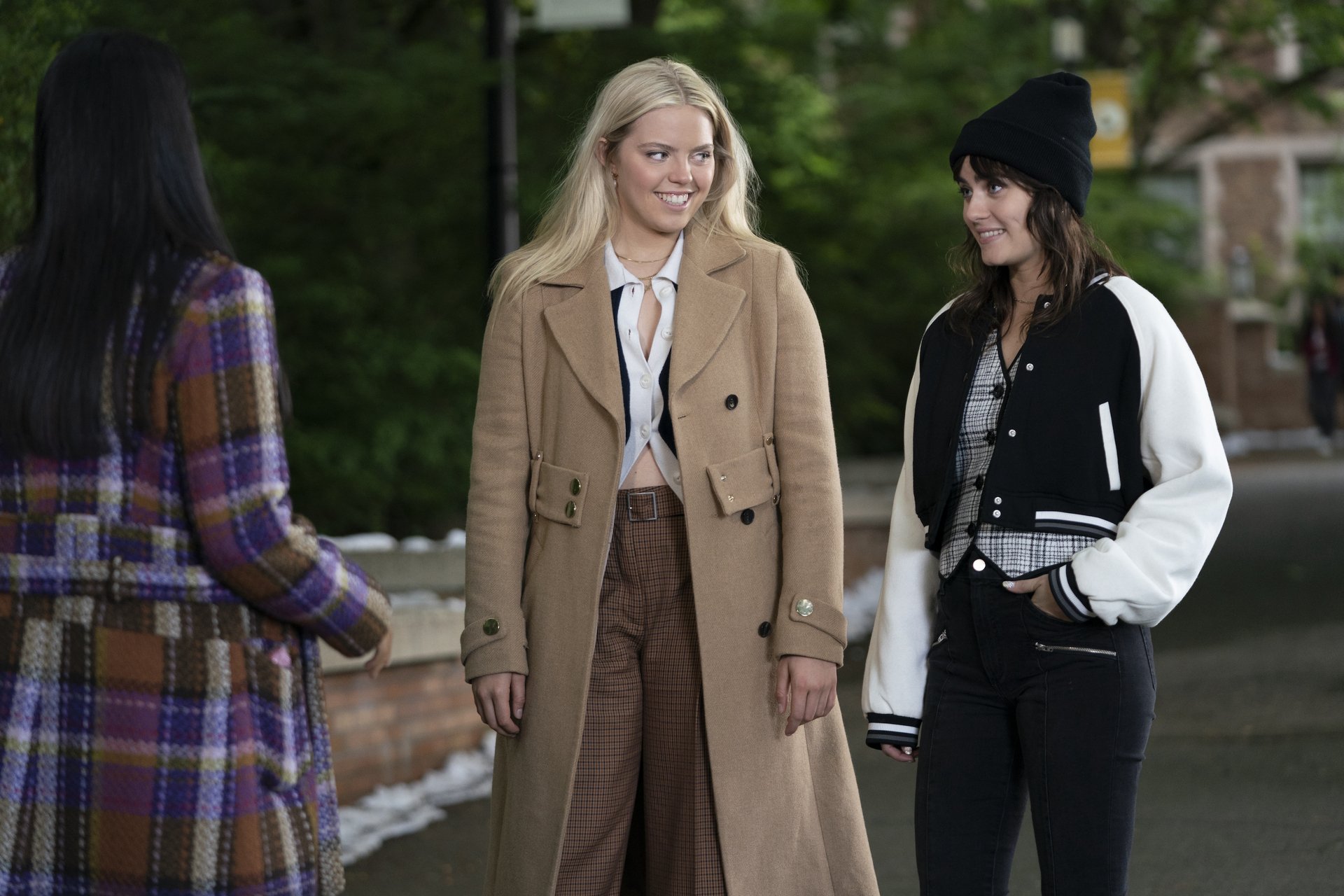 On the other hand, while going through Zoe’s Instagram profile, Whitney accidentally likes one of her posts. Her roommates, especially Bela, help her with solving this problem. As per her suggestion, Whitney changes her username and her profile picture and also makes her account private so that she cannot be identified by Zoe and thus, saved from humiliation.

At the cafe, Lila (Ilia Isorelýs Paulino) asks Kimberley to discuss her loan prospects. During their chat, Professor Hennessey from their university pops by, along with a Syrian ex-pat student, and invites her to a dinner party. Since Lila sees her helping out the students in need, she suggests Kimberley ask the professor to cosign her loan application. Meanwhile, Bela & Leighton’s strip show with the Thetas gets attended by one of their female professors who gets appalled witnessing the obscenity. She finds it regressive, especially after being a staunch supporter of feminism all her life. However, after seeing the exuberant funding they received, she decides to let them conduct the show on one condition – none of the students will be completely nude.

When Kimberley goes to Professor Hennessey’s party, she asks her if she would cosign her loan application. The professor asks for some time to think about it. Soon after, she agrees to do so for her. However, when the professor is not around, her husband makes a pass at Kimberley, asking if she would like to have sex with him. In the moment of awkwardness, she ends up saying ‘cool’. And while she does not want to say yes to the request, she does not want to mess up her chances of getting a loan either. She regrets this decision afterward and plans to apologize to the professor about it.

On the other side, Cannan sees the updated username & picture on Whitney’s profile and asks her about it. She says doing it out of fear after accidentally liking Zoe’s picture with her grandmother. After realizing that she was jealous of him and Zoe being close, he clears her doubt about it and also makes her feel special. Meanwhile, in the strip show fundraiser, all the gang gets a lap dance by the male students, despite the danger of their fundraiser getting stopped. They enjoy this golden opportunity to the fullest.

The next day, when Kimberley is asked to meet by Professor Hennessey. She gets scared thinking that her husband spoke about what happened the night before and blurts out the scenario. However, the reason why the professor does not want to cosign is that it might badly affect her credit score. After hearing about her unemployed husband misbehaving with this young student, the professor throws him out of her house right away.

Where to watch The Sex Lives of College Girls