The Woman King (2022) Movie Ending, Explained: ‘The Woman King’ is directed by Gina Prince-Bythewood and stars Viola Davis, Lashana Lynch, Thuso Mbedu, John Boyega, Sheila Atim, and Jordan Bolger. As a fictionalized retelling of history about the Agojie clan of warriors of West Africa, it’s only apposite that such a story also happens to be an extremely rare instance of a big-budget Hollywood production that women lead in front of and behind the camera. Because of this, the film feels like a transitional work for Hollywood’s shift to making such films and is therefore crafted within an extremely tried-and-tested framework of an action/historical film whose every move can be told from a mile away. Yet for not even a moment is ‘The Woman King’ a dull experience, instead being a wildly entertaining commercial fare that looks into Dahomey culture while also engaging with the history of the Atlantic slave trade.

Dahomey is a West African Empire, a tributary state of the Oyo Empire with whom they are in conflict. The Oyo is a larger Empire, with various other tribes and kingdoms as allies. They have greater military might owing to the possession of horses and guns. This is because they freely engage in the slave trade with the Europeans, selling their own people and captives for these benefits. When ‘The Woman King’ begins, the Oyo have control over Ouidha, a port city that is actually in Dahomey territory but one they have gained control over, furthering their power by strengthening their trade network.

Dahomey has recently gained a new young king, Ghezo. Under his command is an elite battalion of female soldiers, the Agojie, feared across the land for their ferocity in battle. The Agojie live uninterfered in a palace of their own, neither take lovers nor have any conjugal bonds, instead dedicating their life to battle and serving their monarch, which in turn gives them respect and even a say in their monarch’s administration, a privilege that women across the rest of the continent cannot dream of. The status of women in Dahomey society, though, is hardly as progressive. Dahomey once engaged indiscriminately in the slave trade but now, under Ghezo, do so in a relatively controlled fashion in that they only sell their prisoners of war to slave traders. 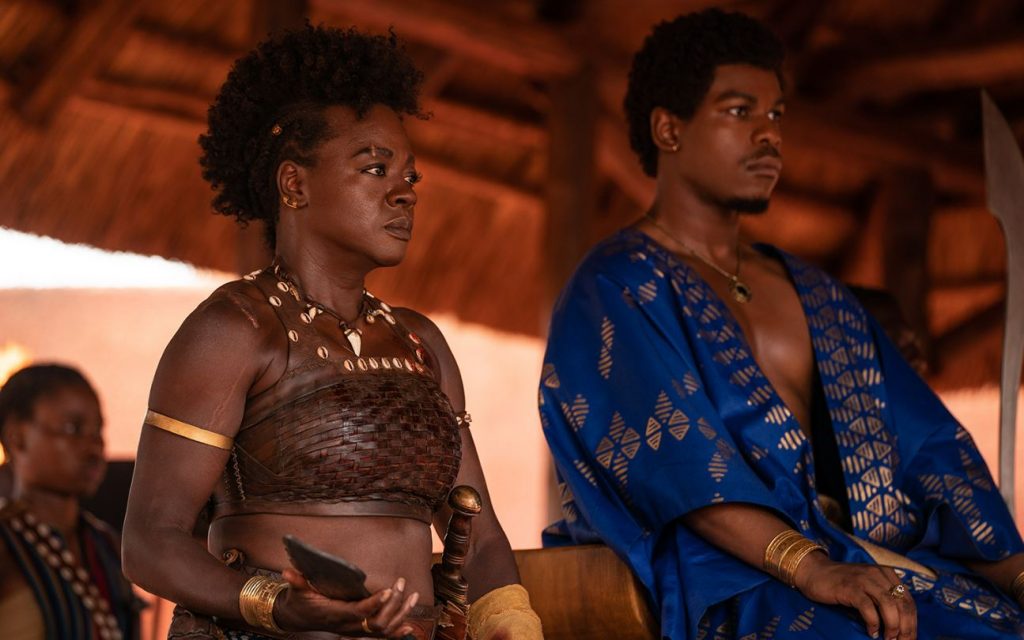 Nanisca is the General of the Agojie under the reign of King Ghezo. Among her soldiers, she is a legend owing to her past in which she was left to die after being captured as a soldier but managed to escape heroically. Following the freeing of some Dahomey captives, she confronts Ghezo about the immorality of the Atlantic slave trade. Ghezo is sympathetic, primarily because his brother sold his mother as an enslaved person. Still, given how rich and powerful the other kingdoms have become through it, he doesn’t see an alternative. Nanisca provides him with one in the form of palm oil, which they produce in abundance and export, which can ensure their economic prosperity in lieu of slavery.

Nanisca is also engaged in training newer Agojie recruits, composed of young girls given away to them because they are unruly or deemed undesirable. One such girl is Nawi, whose foster father gives her over to the Agojie to unencumber himself of her after she refuses to get married and lead a life of subservience.

Santo Ferreira, a Portuguese slave trader, arrives in Ouidha as an ally of the Oyo. His friend and companion, Malik, is half-Dahomey and half-White, and he accompanied Santo because his mother’s last wish was for her son to see her homeland and her people. The General of the Oyo, Oba Ade, is a ruthless man who freely engages in the slave trade and greedily seeks to expand the Oyo Empire.

The custom that maintains the peace between the Oyo and Dahomey is the latter offering a hefty annual tribute to the former. Given the involvement of the Oyo in the Mahi tribe’s raid of a Dahomey village and subsequent taking of captives, the tribute paid to the Oyo in the year in which the film is set is lessened. Oba Ade demands twenty Agojie warriors to compensate for the deficit and prevent a conflict, eventually settling for ten. When the surrendered Agojies arrive in Ouidha with Nanisca leading them, she refuses to let her soldiers be taken up as enslaved people and prostitutes by the Oyo and the Europeans. A fight breaks out between her and Oba Ade. Nawi intervenes in order to save her, and the two manage to escape. This is enough of an offense for the Oyo to declare war against Dahomey.

What is Nanisca’s connection to Oba Ade?

One night, Nanisca tells Amenza that she has premonitory dreams about her future. Amenza uses a fortune-telling method to inform her that it’s an enemy from Nanisca’s past who is going to harm her return. At the time, she dismisses this as stuff and nonsense. Soon, the Oyo delegation led by Oba Ade arrives in Dahomey to take their annual tribute. The sight of him makes Nanisca recall her traumatic past with him. When she was young and had been taken captive by the Oyo, she was raped every night by their soldiers, one of whom was Oba Ade. Now they’re both generals in their respective kingdoms, but he doesn’t remember her while she clearly does. This experience also informs her principle that the Agojie should kill themselves instead of letting themselves become slaves if taken captive.

Who is Nawi’s biological mother?

In the past, when Nanisca arrived in Dahomey following her valiant escape from her captivity under the Oyo, she was pregnant from being raped. As Agojie isn’t allowed to marry or have lovers, she has to hide her pregnancy from her peers. Eventually, she gave birth to a baby girl, with Amenza acting as the midwife. Amenza gave the baby girl away to a wandering group of missionaries. She was made to promise by Nanisca that even if she begged to know about her child’s whereabouts, Amenza wouldn’t tell her.

But before giving her baby away, when she was by herself with her, Nanisca put a mark on her baby. She made a slice with a knife on her shoulder and planted a shark’s tooth in the cavity. In the present day, when Nanisca sees Nawi’s scar, a supposed birthmark, she is stunned at how similar it looks to what she did to her child. In fact, Nanisca even has a similar scar on her own back though the story behind that is never told. At the bathhouse, Nanisca cuts open Nawi’s scar, from which the shark’s tooth falls, revealing Nanisca to be her biological mother.

The unspoken side of slavery

The Atlantic slave trade looms over the narrative of ‘The Woman King’ as a specter from which no one is exempt, be it as a victim or perpetrator. In fact, despite the film’s look at the vibrancy of a particular African culture, the film doesn’t shy away from addressing the intentional gap in history with regard to slavery. Slavery is seen as the sole means to prosperity by West African kingdoms, while it is through the lens of it that the White man views Africans. That slavery was not only the White man’s enterprise, but also that of tribal chieftains and monarchs of Africa is repeatedly shown throughout the film.

Two particular scenes address this prejudice especially well. One is the scene when Santo Ferreira is telling King Ghezo how slavery is essential for the latter to keep up with the times. Ghezo avers how the White man’s commodified view of Africans does not affect his throne and the power that comes with it and that the business of slavery makes them interdependent, as opposed to giving Santo the power over Ghezo. This assertion seeks to address the power dynamic between the Europeans and the Africans at the time, supposedly skewed against the latter. In another scene, Malik tells Nawi how his mother’s wish for him to see Dahomey changed his perspective of Africa and his lineage completely. In an earlier scene, we see him, and Santo Ferreira fascinated at the sight of Agojie’s ferocity. Following his visit to the Dahomey kingdom, he expresses how this makes him realize that Africans, unlike their existence in Europe, aren’t a benighted and subservient race but a thriving people composed of kings and warriors.

Following Nanisca’s arrival just before Shante’s coronation, Ghezo’s admonition turns into admiration when she sees what she has accomplished – saving her soldiers from captivity and heinous exploitation, as well as effectively defeating the Oyo Empire by her intrepidity. Instead of having to quit her position as the General of the Agojie, Ghezo makes her the Kpojito or ‘the woman king’, a coveted position that puts a woman on equal footing with the monarch. Nanisca’s bravery instills in Ghezo the ambition to abolish their engagement with the slave trade, thereby replacing it, in all possibility, with palm oil as the alternate source of income for his kingdom. This shows the extent of Nanisca’s influence, going beyond the military and into the social and economic realm of the kingdom, cementing how excellent a monarch she’ll prove to be.

Nawi apologizes to Nanisca for being the outcome of the most traumatic part of her life. Nanisca dismisses such thought, reminding her that her birth was no fault of her own and, if anything, her cowardice made her get rid of her daughter in favor of conformity. Soon after this, mother and daughter unite as Nawi overcomes her guilt, making Nanisca reclaim her violation and exploitation through Nawi.

Where to watch The Woman King

Smile (2022) Movie Ending, Explained - What is the mystery behind the "smiling" curse, and does Rose break it?