This Shaking Keeps Me Steady [2019] ‘LIFF’ Review: The Bottomless Pit of Reality

Somewhere in the film, the man who’s being interviewed asks if he can get up to have a glass of water. He wonders if it would affect the film or if this interruption would bother the flow of his narrative. Moreover, he assumes that this unrelated dialogue might not be in the film as it’s not a part of the subject. Despite that, the dialogue is a part of the film, perhaps to keep the authenticity to its subject- dealing with their mental state while staying in the moment. Similar instances make his outlandish hallucinatory narrations seem shockingly real. Shehrezad Maher’s ‘This Shaking Keeps Me Steady’ succeeds in presenting this nightmarish reality, in the earnest possible way.

The hour-long documentary revolves around two ambulance drivers who, as a result of their job, are stuck in the vicious cycle of life and death. Both the paramedics are interviewed primarily on how their jobs affect their mental health as well as their daily lives. They share their experience working in real life as well as for the re-enactments of these incidents. Besides that, the conversations also dwell on the surreal dreams that occur as the aftermath of the traumatic incidents. The film observes the daily lives of these individuals to speak about the associated metaphysical elements, while perhaps blurring the lines between dreams and reality, trauma and its recollection as well as between the actuality and fiction. 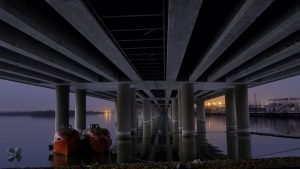 One of the drivers talks about the incidents that occur during the sensationalized re-enactments. He believes that the actors involved in the reel version, have a tougher job than someone like him. “They have to re-live the same moment over and over again,” he says.  And yet from the footage that we see, their performances start to look more and more archaic as we move along. Even with the elaborate set-ups, everything appears fake and ingenuine. On the other hand, when these drivers speak about their recurring dreams, the vivid imagery that they present is far more horrifying. Even the fake bloodbath created for the teleplay comes nowhere close towards understanding about their personalities. Because of that, the decision of not using any explicit real-life imagery seems fairly justified.

Related to This Shaking Keeps Me Steady – REASON (VIVEK) [2019]: ‘LIFF’ REVIEW – A BRILLIANT DISCOURSE ON THE PERNICIOUS RISE OF RELIGIOUS EXTREMISM IN INDIA

The real events are never shown on screen. We just hear about their versions surrounding what they encounter on a daily basis. A mystifying quality that it gives to their experiences complements the overall approach. It is almost like deconstructing reality with the mirror of cinematic representation. Even the dialogue these drivers seem to have, indulge more surrounding their cause than actually acknowledging it. Which is why, the choreographed reality hardly holds a candle in front of their narratives, no matter how ambiguous they may sound at times. The paramedics can’t ask for help in the fear of being dependent on someone else. Perhaps, that constant ordeal is just the reason that keeps them going. As a result, the title makes perfect sense here taken from Theodore Roethke’s ‘The Waking’, which is just as ambiguous yet paradoxical in its narration.

Similar to This Shaking Keeps Me Steady – #GADHVI (HE THOUGHT HE WAS GANDHI) [2019]: ‘LIFF’ REVIEW – A MEANDERING SOCIAL-SATIRE

The best thing about this film is it explores her fascination towards the subject. And it never provides any conclusions or definitive answers. It just showcases their situations. Besides, the whole film stays afloat on a transitory state and never settles to stick to a regular narrative structure. And the camera moves around without particularly focusing on anything. As a result, we listen to the voiceover-narrations of their experiences with the visuals often unrelated. It just adds another layer to this largely surreal experience.

“THE SHAKING KEEPS ME STEADY” WILL BE SCREENED AT THE 10TH LONDON INDIAN FILM FESTIVAL, 2019
CLICK HERE FOR OUR COMPLETE LIFF COVERAGE

Interview with Justine Treit: "The movie business is a microcosmic society where life speeds up and intensifies."

This Shaking Keeps Me Steady [2019] ‘LIFF’ Review: The Bottomless Pit of Reality