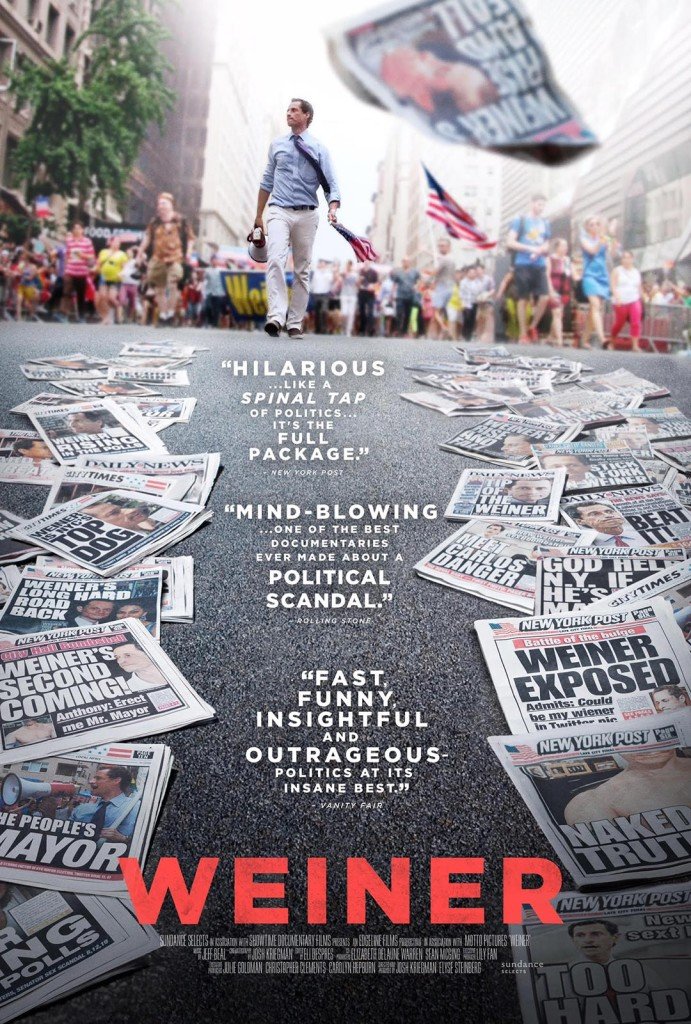 Josh Kriegman and Elyse Steinberg’s riveting political documentary “Weiner” (2016) commences with the quote, “The name of a man is a numbing blow from which he never recovers”. Those with a passing knowledge of internet, texting sub-culture would know what ‘weiner’ means. But, the former US Congressman Anthony Weiner is not just damned for the name he was given at birth; he was damned by the name he earned by doing some bad things, from which he was never allowed to recover. In the opening sequence, we see distressed Anthony Weiner confiding “I can’t believe I’m doing a documentary on my scandal” and continue to say “I did the things”. What things did Mr. Weiner do? In 2010, when Republicans blocked the healthcare for 9/11 rescue workers to prevent corporate tax rise, the Brooklyn politician responded in a very passionate & furious tone that went viral and made him the ‘media darling’. In the next year, Anthony’s courageous, unfiltered talks on various people issues enabled him to write columns and be a central participant in talk shows. Poor, Mr. Weiner didn’t know that feeding ‘entertaining’ news to corporate media is pretty much like feeding red meat to a predator (or maybe he did know and can’t stop himself from doing it). A little, careless dribble of your own blood and the predator will pounce upon you. Maybe as Weiner’s detractors say ‘there’s something wrong with him’ or he is so caught up with narcissism (like there is crave for seeing his own image on every media outlet). Nevertheless, the media attention crushed him, when the first of his sexting behavior became public in 2011.

Why would Mr. Weiner send the pictures of his penis and conduct lewd chats with strange women? In 2010, he was married to Huma Abedin, the closest aide to Hilary Clinton (former President Bill Clinton officiated their wedding). She is considered to be third important person (Vice-Chair) in Hilary Clinton’s current Presidential campaign (after the release of the documentary on August 29, 2016 Huma Abedin finally announced that she is seeking divorce from Weiner). There’s no explanation for what made the documentary’s subject to commit this stupid mistake. Of course, we are given some enlightening context on Mr. Weiner’s horrible undoing of his illustrious stature. And, in a way there’s no need for a perfect explanation about the man’s proclivity for sexting, since this is not a documentary about putting things in order from Weiner’s point of view. Directors Josh Kriegman and Elyse Steinberg’s stranger-than-fiction, roller-coaster ride unflinchingly examines the squirm-inducing judgemental attitude of the ‘news-makers’ and how we too are manipulated to judge a person in ‘black-and-white’ due to shameless reporting of big media houses (the aforementioned quote, which i said opens the film, is uttered by Marsall McLuhan (1911-1980), a great intellectual who accurately predicted how the new media will gain power to transform human nature). 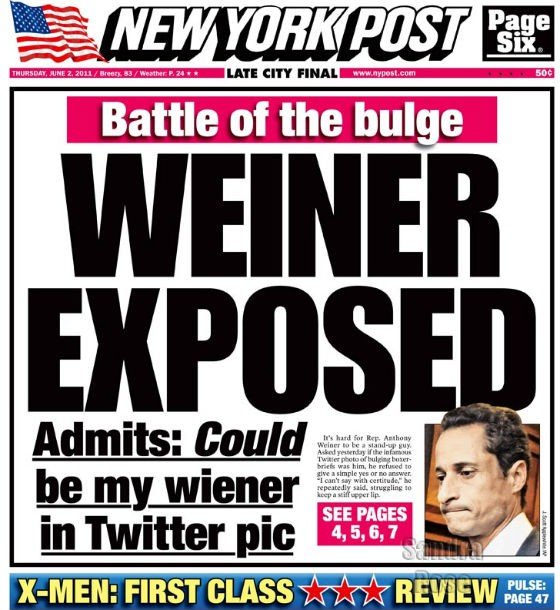 Kriegman and Steinberg’s journey with Anthony Weiner began when the outspoken politician announced that he is going to contest in 2013 electoral race for New York Mayor (he previously contested in 2005 and failed and in that campaign Josh Kriegman worked for Weiner). As the earlier portions of documentary says “his staffers had to crowd control with the press. A problem other candidates dream of having”. Of course, the questions from media mostly came down to addressing his sexual indiscretions, made public two years before. So, Kriegman & Steinberg thought of profiling one of the most scrutinized modern American politicians. Little did they know about the surprises that awaited them during the Mayor Election campaign, which transcended their earlier themes (a ‘comeback story’) to make this documentary, a thorough examination of the current media atmosphere (while it also doubles as a cracking character study of a modern politician). In brief, the film-makers got a box seat to view the all-around attack on Weiner’s flaw.

Within the few weeks of the election campaign, despite few bad presses, Anthony Weiner was back to his old hyper-active, energetic self and shot to the top of the polls, leaving political experts dumbstruck. While documenting this initial phase of campaign, it was like we are witnessing a perfect comeback story. As we learned through Jordan Belfort’s (Wolf of Wall Street) escapades, America is not only a land of dreams & home of the brave, but also the land of second chances. Alas, Weiner’s prospects for gaining a second chance were ruined when the famous campaigners’ next series of sexting episodes were made public (which has continued to happen after his public humiliation and resignation from Congress in 2011). The timing of those revelations brought back the reporters reveling in yellow journalism. The film-makers pose enough questions to state how Anthony had misused the trust placed upon him by his wife and the people who staunchly believed in his political ideals. But, no room was left for the voters to decide on whether they should vote on this guy (with a terrible hobby). The nauseating, hypocritical vilification began, which once reduced Weiner and his wife Huma into punchline or a caricature. It is important to understand that the tabloid reporting tactics isn’t just a part of reporting. It is the only tool used by American media against Weiner. From New York Post to Fox News to MSNBC’s “The Last Word with Lawrence O’Donnell”, the famous media personalities loved to innovatively roast a guy among millions of viewers. It was high-tech bullying at its worse.

Why would Anthony Weiner allow Kriegman and Steinberg to film him even after his campaign cut into full-blown disaster? He says he wanted to be viewed as a full person than what he was reduced to. Huma, despite being quiet, wants the documentary to tell a complete story of them. Alongside Weiner, Huma was also repeatedly judged and ridiculed for her choice to standby her husband. The strange arc the documentary took, after the intensity of media attention, accurately observes the emotional pain faced by Huma, a mother, wife and someone immensely talented at her job. While Weiner comes off as a complex, part fascinating & part repulsive guy, it is Huma for whom we empathize with.

The events almost move like an edge-of-the-seat thriller, especially when Weiner and his aides make plans to escape or confront the dirt-throwing media persons. There are also many moments when the camera calmly observes miserable as well as hard-to-understand nature of Weiner. Take the incident, when he walks to MSNBC’s talk show with Lawrence O’Donnell, which goes down very bad for him. Weiner is placed in an empty studio floor and announced that the show host will be talking to him from Washington Studio. So, the prospect of having a face-to-face is cut down and Mr. Lawrence’s very first question tells us what’s very wrong with these hypocritical media personalities. His first question, “what’s wrong with you?” shows there isn’t going to be any fair conversation. Weiner starts responding to the question, while on the other side the host initiates a shouting match. Weiner raises his voice and in that moment, the film-makers observe their subject from a distance, talking to a giant screen. The shot pretty much tells us how the media had stopped listening and started shouting. It shows how the glorious ‘fourth pillar’ of our society sits atop and blindly passes judgment on people, viewing through a narrow lens labeled as ‘news-worthy’.

“Weiner” is blessed with impeccable editing work (by Eli B. Depres). We see news clips, denunciations, and news paper headlines, repeatedly reporting sexual proclivities of Weiner and then we get the ‘behind-the-scenes’ story by presenting what’s going on inside Weiner’s mind or around him. Although we don’t fully support the man’s activities, this approach shows a humanity which was totally absent with the media firestorm. We see attention-seeking hacks turned philosophers and psychiatrists in the talk-shows, commenting upon Huma’s decision to stay with her husband even after the revelation of his second series of sexting. One guy plays the press meet clip of Huma and says that “it represents the image of spousal abuse”. Considering the number of ludicrous news shows we are exposed to in our life, we know how majority of people in those programs are bullshitters with an ‘intellectual’ label. But, still many of the things we hear in the documentary, in related to the scandal through news or talk shows takes the media houses’ sleazy attitude to a whole new level (the Sydney Leathers episodes were the most shocking & rage-inducing ones. The woman comes-off as egomaniac & an ugly narcissist than the person she is accusing).

As I mentioned before, there is no straightforward answers given to why Anthony did what he did. But, Huma’s silent expressions and Weiner’s perplexed expressions offers some perspective (or possible answers). We see that the man is really committed to his ideas, but when he says that his political life should be totally divorced from his personal life, we can’t somehow buy it. It’s because we understand that the same qualities that made Weiner a fascinating politician (like being at the center of limelight with his frank opinion on real issues), pushed him to do some dumb personal things. On one hand, he had the courage to face media channels like Fox News to talk in their news shows on progressive causes (including gay rights). On the other hand, the nether side of him showed similar courage in pursuing online affairs. It’s like his virtue of being an outspoken personality were both the strongest and weakest aspects of him. It is made clear that Mr. Weiner likes to play with media (except when he is roasted by them). Look at the smartest way he arrives inside the polling booth. He deliberately carries his little son to the voting room and makes a cute story out of it. He is also fully aware of his mistakes, while inevitably repeats it. “I just have this incredible ability to fuck up things” says Weiner, which does seem like a fair evaluation of his own-self. So we are unable to totally divorce one part of him from another. Nevertheless, the great aspect of this documentary is that there is no definitive judgment on ‘Weiner’. You are allowed to come to a conclusion on whether he is forgivable or whether his personal issues are irrelevant. We get to see the real human being beneath all those painful mistakes. It boasts the humanity, which the great media pundits never had.  The film’s tone is amazingly balanced as few humorous moments are sprinkled to lighten the mood (the aide telling the secret behind the code word ‘Pineapple’ plus the expression of a boy eager to take a selfie with Weiner makes up for some of the funniest moments).

“Weiner” (96 minutes) is a sharp and thoroughly engaging documentary about an extraordinarily talented & flawed 21st century politician, uncontrollably disgraced by sensation-hungry zombies in the media. It’s a must watch for anyone interested in studying the one-note hysterical reactions of our modern ‘connected’ societies.

Mountains May Depart [2016] : A Capitalistic punishment.