Nothing quite beats the glitz, glamour and excitement of a casino movie. Picture the dazzling casino among the five star hotels and elite guests in Monaco, or the grand scenes of the casinos lining the boulevard in Cannes. Casino movies offer us a chance to escape our reality and picture ourselves as the characters, whether that be on the right side of the law like James Bond, or the wrong side like in Oceans 11.

So, what is it that makes a good casino film? Is it the location, the actors, or the action? Or is it all three? When it comes to casino movies, it doesn’t matter how old they are, they can still be a timeless classic if the storyline is just right. Below, we’ll take a look at what it takes to produce a good casino film, while looking at some of the best casino movies around.

What does it take to film a great casino scene?

When it comes to casino movies, it doesn’t take much to entertain the viewer. Casinos are naturally high stakes environments, making it an exciting place for the audience to be with the character in the film. Who knows what could happen as they could lose all of their money and experience a life crisis or participate in one of the most elaborate heists yet.

With that in mind, what other factors make a great recipe for a casino scene? Let’s take a look in closer detail.

While casinos are an exciting place to be and some thrilling action can take place in a casino scene, they can also be the dullest thing going. Imagine watching a poker game in a movie in real time; most of the audience would be asleep by five minutes in.

A great producer will not focus too much on the actions within the game but only on the high stakes scenes, such as the final hand in order to keep viewers engaged and gripping on to the edge of their seats.
Realism

When it comes to filming a casino scene, the director must be careful not to get too sucked into the action of the game being played. The camera should brush over the actions and reactions of those involved in the game and only slow down to focus on the high stakes moves.

These moves should lead to a natural crescendo of something happening within the game, without building it up for too long in order to keep viewers engaged.

As well as the action being filmed just right, the development of characters is just as important as no one cares about a character losing millions in a game of poker if they do not have an emotional investment in them.

Getting in on the action

Watching a great casino movie is enough to make anyone want to get in on the action and visit a casino themselves. However, many of the lavish casinos in films are based in exotic destinations that are not practical to get to without travelling and spending a significant amount of money.

The best casino movies around 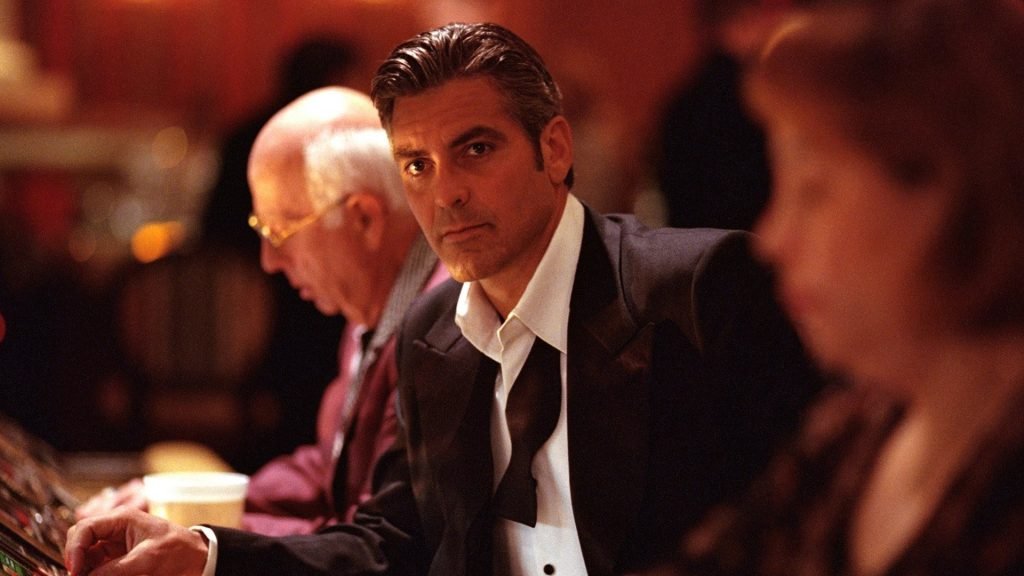 Below, we’ll take a look at some of the best old and new casino movies around.

Ocean’s Eleven is one of the most popular casino movies of all time and is considered a classic by many. The movie features several legendary names in the acting world, including George Clooney, Brad Pitt, Andy Garcia, Julia Roberts, and Matt Damon.

One of the great things about the casino scenes in this movie is that it shows the elegance and excitement of the casino world in modern Vegas. Players are portrayed in sleek suits with cocktails in hand, making viewers want to get in on the glitz and glamour of the high class casino world.

Of course, some of the best casino scenes are in older movies like Casino, which is also considered a classic. Filmed in the mid 90’s, Casino stars the popular Robert Di Nero as a dangerous and unpredictable mobster who runs a notorious casino. While Di Nero is trying to do things the right way, he ends up being constantly undercut by his friend and business partner who he shouldn’t trust.

Differentially to that of Oceans 11, Casino shows the slightly more grungy side of the casino world, offering a different kind of drama and excitement.

Overall, nothing quite beats a well produced casino film that has viewers gripping the edge of their seats in suspense. While it takes a lot of work to get a casino scene just right, those that do go on to produce films that become a timeless classic.