The premise of Thomas Daneskov’s ‘Wild Men (2021)’ is right out of a sitcom trope. In fact, this trope has indeed been used at least twice from what I can recollect. In two extremely popular American comedy shows, ‘The Office’ and ‘Modern Family’. The grizzled machismo of a middle-aged man trying to rear its head from the drudgery of the routine life through a new-found but ill-conceived bond with nature is something we have seen both Michael Scott and Phil Dunphy do. If you are aware of them, then you are also probably aware how the naturalistic adventure sans everything modern went for them. ‘Wild Men (2021)’ would also leave you similarly amused if not doubling up with laughter.

His seemingly perfect life has left Martin (Rasmus Bjerg) devoid of happiness. At least, that is what he had thought before deciding to ditch everything and do an ‘Into the Wild’. He lies to his wife about a conference in another country, and off he goes to fulfill his adventure. Dressed as someone who has just watched Robert Eggers’ ‘The Northman’ and got heavily inspired by it, Martin tries to channel his inner Viking in the Norwegian wilderness. However, when his hunting and foraging come short of adequate, he has to resort to crisps and sodas from the nearest gas station. Only he has to rob them, clumsily, as a modern-day ‘Viking’ might have to.

Although there is not enough exploration of the origin of the existential crisis of Martin, its humorous take on the crisis itself would definitely resonate. Underneath the heavy middle-age garb and the faux charismatic machismo, Martin is portrayed as a bumbling man-child with next to nothing survival skills. But he does survive, and that he does with the help of his newly-made friend, Musa (Zaki Youssef). Martin meets Musa when Musa, along with his friends, meets with a car accident. Musa, wounded and considering his friends dead, leave the car and takes shelter in the nearby woods, where he comes across Martin. 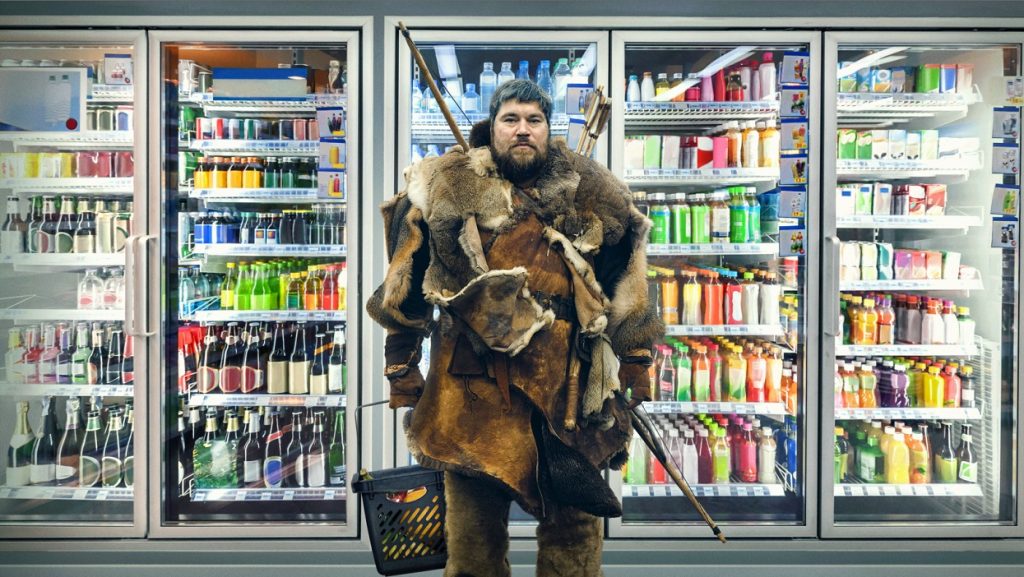 As Martin does first aid for Musa, little did he know that Musa and his friends, who are not actually dead as opposed to what Musa had thought, are part of an international drug-smuggling gang. This Coen brothers-esque premise is laced with possibilities of a great dark comedy. And director Thomas Daneskov, with co-writer Morten Pape, does not shy away from that. As Martin and Musa start to display a likeably weird dynamic between them, the proverbial plot also thickens as both of them are pursued by the Norwegian police, led by an aged lead officer, Oyvind (Bjorn Sundquist); as well as by Musa’s two other partners in crime.

Daneskov has the story filled with plenty of moments that would leave a chuckle. One of them was the absolute lack of manpower in the policing department in Norway. And the absolute reluctance of the polices to use, or even, carry their licensed guns. A bit of contrasting commentary in the current climate. The McGuffin of the story is the apparent ‘Viking’ village that Martin wants to visit. But the twist at the village would make Martin demoralized, and us humored, as Visa and American Express are acceptable modes of payment there.

I have previously seen Bjerg in another Danish film ‘Sons of Denmark’, where he portrayed a charismatic white supremacist leader. His ‘Martin’ here is almost the opposite of that. Bjerg proved to be equally deft at portraying both types of characters. Bjerg’s ‘Sons of Denmark’ colleague, Zaki Youssef is also present here. Youssef is as natural as it comes in the role of Musa. Sofie Grabol, who played Martin’s wife and whom one might remember from ‘Forbrydelsen’, is fantastic, even within her limited scope. As is Sundquist, the voice of this story.

As if to pay homage to the aforementioned Coen brothers, Daneskov also included a subdued but thoroughly tense gun battle at the end. This neither heightens nor lessens the essence of the film. This also becomes an incident that Martin witnesses and imbibes. In the end, he does get enriched with some unique experiences, most of which he could not have foreseen. Whether that changes his situation when it comes to his mid-life crisis; remains up in the air. Then again, that is the scenario with most of us when we do encounter existential dread.