Ms. Marvel Season 1 Episode 2 Recap & Ending Explained: Last week Ms. Marvel (Iman Vellani) made her live-action MCU debut to applause from both critics and the audience. In fact, as of now, the show stands as the highest-scoring Marvel Production on Rotten Tomatoes which is absolutely justified given the absolute spirited performance by Vellani in the first episode, accurate cultural representation, and fantastic soundtrack (following Moonknight’s footstep).

However, in an unfortunate turn of events, the show also got review bombed on IMDB because of its South-Asian Muslim lead which really does not take away anything from it, rather it makes sure more people are aware of it which is only a good thing.

The first episode ended with Kamala Khan saving Zoe Zimmer (Laurel Marsden) at the AvengersCon and discovering her powers (possibly associated with her Grandmother’s bangle). This episode picks up right after that; but while following Kamala’s storyline of realizing her power and her lineage it also focuses on Kamala’s friend Nakia (another character who appears in the comics, played by Yasmeen Fletcher) and her battle against inherent religious bigotry as well as patriarchy, which makes it an engaging, fascinating watch overall.

The familiar MCU intro is back again; and right after that, we see Kamala entering school with newfound confidence, looking visibility happy. She meets Bruno who is excited and anxious and also Nakia, who was briefly introduced in the first episode. Cut to the next scene, they all bump into a new joined senior Kamran (Rish Shah) and Kamala develops an instant crush on him. Later, Kamala sees Zoe describing what happened to her in AvengersCon and calling her savior night light. With her newfound admiration for life, Zoe throws a party, and Kamala is reluctant to go there but then Zoe invites Kamran and now Kamala decides to go.

Meanwhile, Kamala and Bruno secretly start to train and figure out the nature of Kamala’s newfound Superpower. Bruno comes to the conclusion that the bangle might not be the origin of her power, rather it has acted as a catalyst that only unlocked her power from within. Kamala also finds out that the burst of blue light that she shoots with her hand gets hardened and thus calls herself “Hard Light”. She also gets over excited and asks Bruno if she is an Asgardian (Thor reference) and related to the God of Thunder by any chance. Bruno of course rules that out.

Kamala and Nakia visit the mosque where they get frustrated about the unfair treatment of women in their orthodox Muslim society. Kamala tries to convince Nakia to run for the Mosque board election. Nakia is not convinced at first but after her shoes go missing (which has happened before) she decides to give it a go and make Kamala her campaign manager.

Later at home, Kamala apologizes to Muneeba for sneaking out on the night of AvengerCon and also asks for permission to go to Zoe’s party promising that she will be home by nine. Muneeba gives her permission and also orders her to get back by the front door. At the party, Kamala’s crush on Kamran intensifies. Suddenly cops break into the party and Kamala, Nakia, Bruno, and a bunch of other kids escape in Kamran’s car.

In the car, Kamala and Kamran bond over their love for similar kinds of music and Bollywood movies, especially Shah Rukh Khan’s Baazigar which happens to be both of their favorite, instead of DDLJ. Bruno is visibly jealous of this budding friendship/romance between Kamran and Kamala. To derail that he tells Kamran about Kamala’s driving test fail but Kamran ends up giving Kamala his number in case she ever wants a driving lesson from him. Kamala comes back home and she is overjoyed about this development between Kamran and her over a single evening. Over texts, she plans a driving lesson with him after school on the day after.

The next day at school, Kamala suddenly discovers a burst of the same blue light on top of her nose. She rushes away to the toilet where Nakia follows her but somehow that burst of light goes away and Kamala’s cover is not blown. Kamala and Nakia then have a conversation about identifies and Nakia explains why she wears the hijab and how that sets her apart. She also talks about struggling with her ethnicity for her whole life. Kamala is fascinated and also glad that Nakia is her friend.

In the meantime, the school counselor calls Bruno and tells him that he has been selected for an all-expenses-paid, prestigious program at the California Institute of Technology. Bruno is obviously skeptical about it because going there will mean leaving New Jersey for quite some time and being away from Kamala, his best friend.

Kamala runs into Bruno who wants to train and find out more about her power but Bruno sees Kamran waiting for her for the driving lesson. Bruno does not tell her about the Caltech thing and decides to do that later. Before getting inside the car with Kamran, Kamala invites Bruno to the Eid celebration and promises that it is going to be fun.

Kamala and Kamran bond further during the lesson. They also bump into her brother Aamir and Aamir’s fiance Tyesha at a restaurant where Kamala introduces Kamran as their cousin and somehow Aamir buys that. While having dinner at her house, Kamala’s father starts to talk about the partition between India and Pakistan. In Muneeba’s absence, he tells a story about Muneeba’s mother Sana while being a toddler getting separated from her father at the train station but somehow managing to come back on her own just before the train left the station.

Sana has always mentioned that she followed a trail of stars to her father. Tyesha asks about Sana’s mother Aisha to which Yusuf says that she disappeared that same night with many others. Right at this moment, Kamala suddenly gets a vision of a mysterious woman from the other side of a portal and she faints. Her family gets concerned but she is okay after a few minutes.

Kamala calls her grandmother at night and tries to find out more about her disappearing great-grandmother Aisha but Sana doesn’t tell much and Kamala gets interrupted by her father. The next morning Kamala asks Muneeba about Aisha but Muneeba refuses to tell anything and gets really mad at the mention of Aisha.

Kamala, Bruno, and Nakia have fun at the Eid where Nakia keeps trying to convince people to vote for her in the Mosque election with the help of the other two. Nakia also manages to convince Yusuf, whose best friend Rasheed is also running. Kamala tries to find out more about Aisha from her mother’s friends but they all dish Aisha and say things like her being a snake, killing a man, and having so many secret affairs and even secret family. 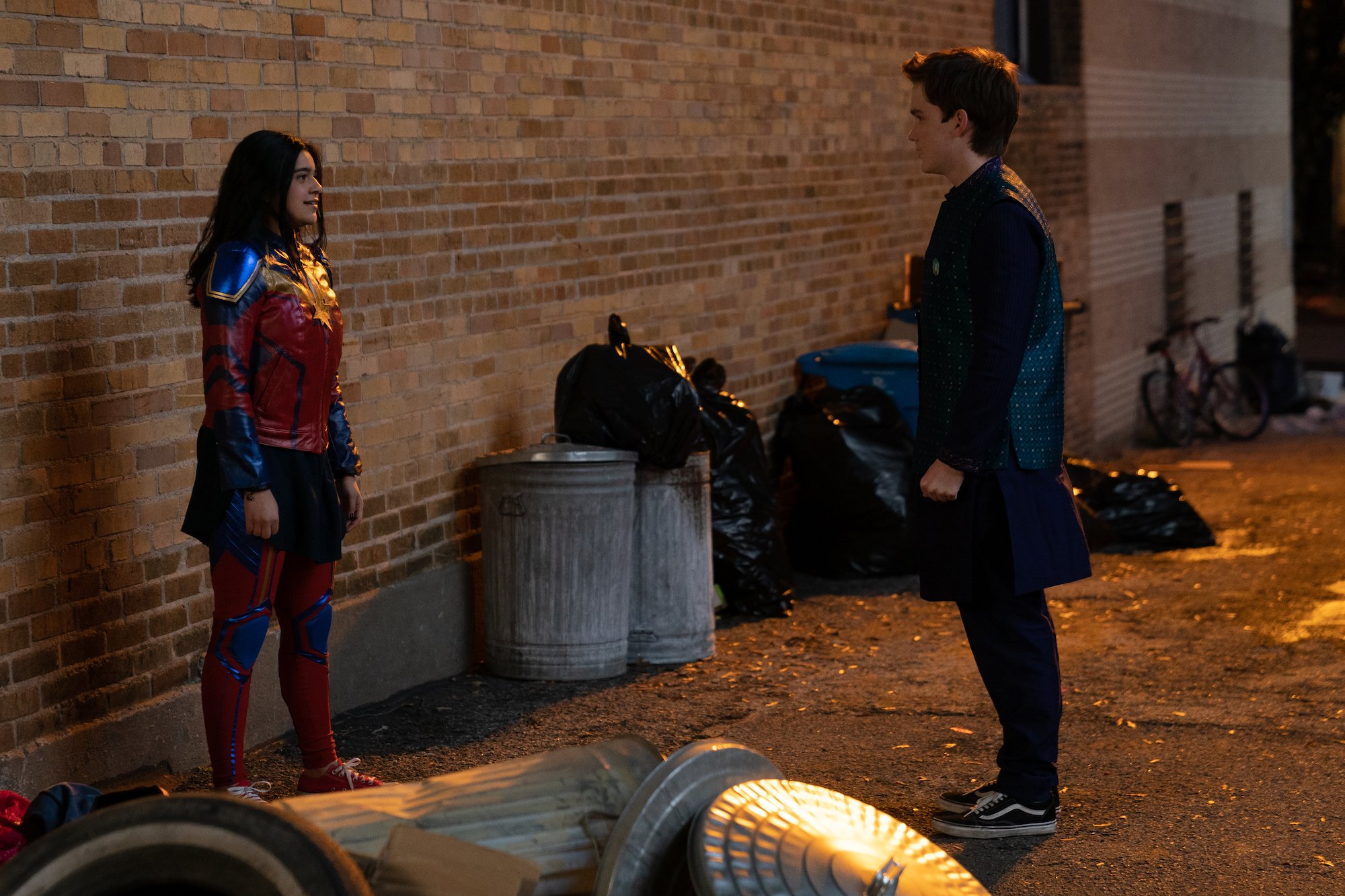 Meanwhile, the Damage Control Department people who made an appearance in the post-credit scene of last week’s episode interrogate Zoe Zimmer where they deem the mysterious woman from AvengerCon dangerous but Zoe keeps insisting that she was in fact saved by this woman. The Damage Control people now try to find out the ethnicity of this mysterious being and Zoe somehow manages to tell them that the woman who saved her is of South-Asian descent.

During the Eid celebration, a boy climbs up the tower of the Mosque but then he falls down, but Kamala manages to wear a costume and save his life by using her power. A lot of people see the whole thing and this new mysterious Superhero immediately becomes viral. Kamala tries to flee from the scene but gets interrupted on her way by the Damage Control people. But she still manages to escape in the end as Kamran appears all of a sudden and it is revealed that he knows about Kamala’s secret identity. A mysterious woman from the backseat of the car says she is dying to meet Kamala and Kamran introduces her as his mom.

The character of Kamran is inhuman in comics and the introduction of him only strengthens the theory of Kamala being inhuman, true to the comics. So, Kamran’s interest in Kamala might just be protecting one of their own.

As far as the backstory of Kamala’s grandmother goes, a very interesting Marvel comic character called Singularity might just be the savior and also responsible for Kamala’s powers as well. Especially the trail of stars is a trademark of that character so this theory does have some volume. Kamala’s great-grandmother Aisha might just be Singularity herself who managed to save her child.

It might be a stretch but Captain Marvel (Brie Larson) could also be somehow involved in that backstory thus directly connecting her to Kamala.

The Damage Control people are shaping up to be the villains of this show but there is certainly another power at the play here.

We will find out more next week.