Lissette Feliciano’s bombastic feature debut “Women is Losers,” kicks off with a self-referential DIY statement. It directly points out the many flaws that critics might just end up picking up from her small indie production. The central characters of her film turn to the camera and breaks the fourth wall. It is almost like the film clarifies that it will be about a series of statements and not an evenly themed narrative. While the approach gives this familiar story some kind of freshness, the often heavy-handed outlook dilutes the overall relevance. Making this more of a lost cause instead of an enlightening achievement.

Soon after the epilogue to the film, we are introduced to our leading lady. The clocks turn a decade back and the setting feels like a 60s San-Franciso from the get-go. In spite of the warning up close, the production is actually pretty detailed for a film of small ambitions. We get to know about Celina Guerrera (Lorenza Izzo) – a smart, slightly distracted catholic schoolgirl. She lives in a controlled household where her abusive, alcoholic father restricts her mother and Celina from having a world of their own.

Related to Women is Losers – See You Then [2021]: ‘SXSW’ Review – Oblique Queer drama stumbles to a finish

Frustrated from this kind of existence where she is unable to make sense of things, she finds solace in Mathematics. She takes a keen interest in the subject because a) she is good at it, and b) of all the things in her life, at least this one makes sense. Apart from that, she also has a close friend Marty (Chrissie Fit) whose friendship serves as a getaway for her. Things seem fine until Celina’s love interest Mateo (Bryan Craig) returns from the Vietnam War. In spite of Marty’s warning, Celina ends up messing up. She is thereby left to attend for herself and her new single-mom status. 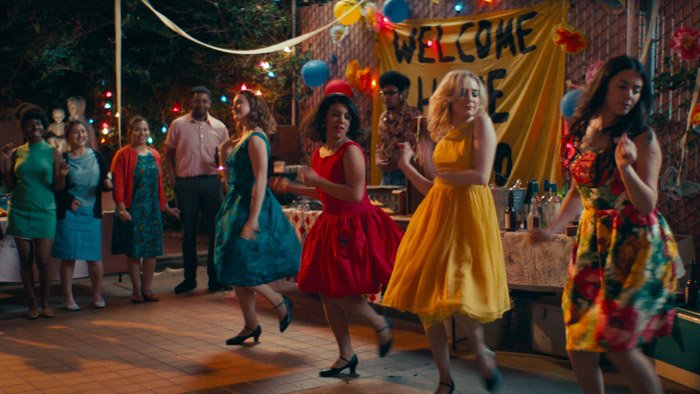 What follows is a pretty by-the-numbers coming-of-age tale about a woman trying to forge a working life in a world ruled by men. A few more characters are introduced into the picture (Simon Liu as Gilbert being the only memorable one), but Feliciano’s focus remains on Celina. She eagerly rushes through the ups and downs of a working-class woman and how she is mistreated in a sector that doesn’t allow them to flourish.

This eagerness to make a statement giving her film a well-intentioned outlook. However, the uneven tonal shifts, the intermediate fourth wall break, and other experimental elements (an old-school black and white montage to name one) hinder her overall approach. She fails to create a balance between her quirky aesthetics and her social critique. In the lure of drawing parallels to the contemporary world – wherein a lot of issues still reside within the society, she loses a grip on her character-driven narrative.

Also, Read – 25 Great Feminist Films That You Should Watch

An earnest performance by Lorenza Izzo can only bring the film so far because everyone else (including Celina’s husband who is only given weightage to be a mouthpiece for sensitive men) feels like one-dimensional caricatures. It’s obvious that for Feliciano, the choice of tracks to be used in the film is important. I mean if the title of the film (which is a direct reference to Janis Joplin’s song) is not enough evidence, look out for numerous other 60s numbers that find a place in the film. However, she slips in the occasional 80s song into the tracklist and you wonder if enough attention was paid into making a selection.

Above all, “Women is Losers” becomes instantly forgettable in spite of showing sparks of greatness. I am sure Feliciano would have a great career ahead but this is a film that will serve as a stepping stone and nothing else.