Yianni John Drakos’ “15 Killings” begins with Norris (Steve Bongeorno) visiting a bar and striking a conversion with a teenage boy. Even before the two characters interact and introduce themselves, the audience knows exactly where this is going. But the problem is not there. The events that occur thereafter, with Norris taking the poor guy home and sleeping with him till the last act- operate on such a banal level of inconsequence that there is no strategy left. It feels heavily staged and poorly performed- and then, the structure of the film comes into play.

15 Killings is essentially meant to be a character study- and is solely interested in Norris’s obsession with luring innocent men, bringing them to his apartment and strangulating them to death. What hides behind this compulsion? We begin with him in the present- imprisoned. Apparently, Dr. Kentyl (Maria Olsen) appears out of nowhere and decides to study the brain of this serial killer by talking to him, studying him and giving him a piece of his own mind. At first, he is reluctant, but Dr. Kentyl knows better. He offers him chocolate and Norris accepts. Sure.

What follows is a good 96 minutes of repeated murders depicted with such tediousness that we do not even care to ask why. The bodies keep piling in a safe vault under his wooden floor and when it starts to stink, suspicions arise. No one’s surprised yet. Unintentionally hilarious is the manner a next-door neighbor hears him strangulating, and the exact same instance is repeated so many times it becomes frustrating. Cut to flashbacks of Norris as a kid having no sense of remorse and regret, strangulating cats. No-one is still surprised yet. Perhaps it is still this “willing suspension of disbelief” that the supposed study of his brain will lead to some satisfactory revelation that will redeem it of its tediousness. 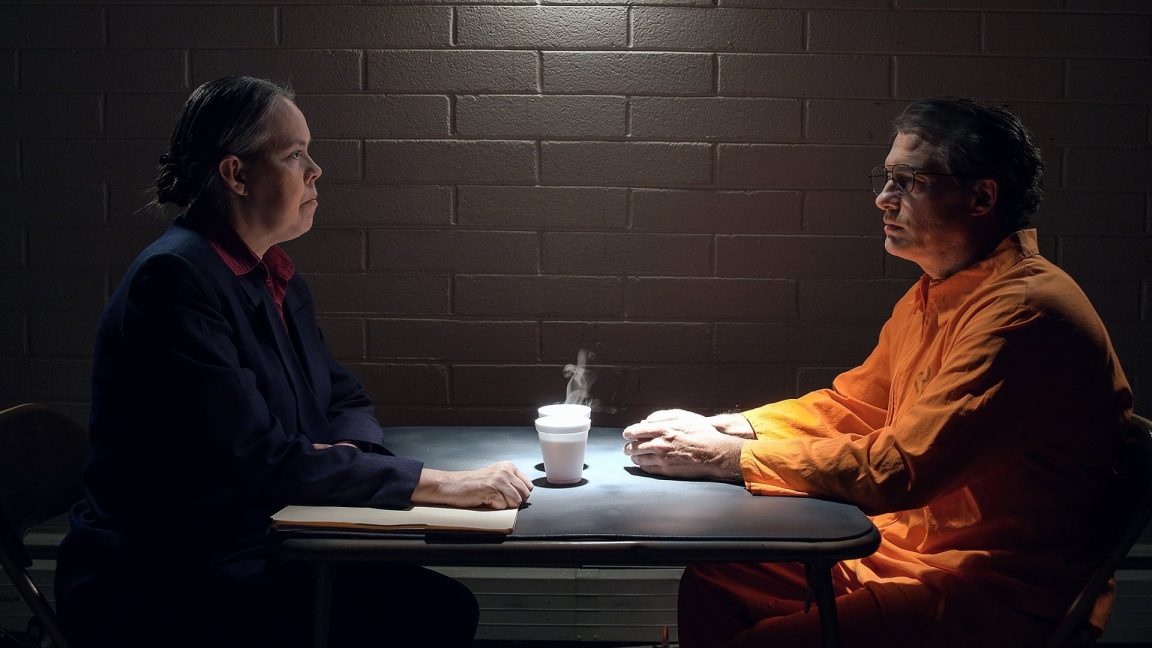 Worse, it does not. 15 Killings remains so stoic in its indifference towards what it means for a neurologist to seek the permission to study the brain of a serial killer; how far it can delve into the human psychology- that it does not even remotely try to get into that conversation. Drakos merely scratches the surface of this predicament of uprooting the intentions behind a truly despicable character, and provides no real insight into the character to hold onto. Horribly staged, the repeated killings carry no meaning and become increasingly frustrating to sit through. Mark D’Errico’s score is self-aware and too cold to make any difference. Even the cinematography by Victor Castroverde does not pack a punch. But most begrudgingly, it is Konstadinos Adraktas’ editing choices that make little sense when interpreting any point made by Dr. Kentyl, serving the same scenes played repeatedly over time, albeit with different people.

Steve Bongeorno moves from once scene to another without any iota of awareness as his performance lacks both restraint and depth. For a narrative that is so invested in tracking the serial killer instinct, Norris must develop into a fascinating character with an evolved sense of individual presence. Bongeorno seems so disinterested in the proceedings and the events he is made to be part of, that his performance does not even try to register a point. He is neither scary nor distinctive, just unsurprisingly funny in his broad spectacles with an expressionless face. Olsen is terribly miscast as the compassionate neurologist whose poor dialogue delivery does blunders for a number of scenes where she is seated in a phony closeup with Norris.

15 Killings fails to provide any particular insight into the troubled mind of a serial killer. Drakos’s film tries to be relevant but fails miserably at it- providing a clueless, repetitive snore fest for the senses. What comes out of the intended brain study is laughably bad, and by then- you would have expected exactly that.